Or, Why I Was at Kinko’s at 2AM on Wednesday.

The class I’m taking at UW had a group work assignment due today, in which we had to develop an instruction manual for something unrelated to computers, cars, food, or weapons. After the other two members of my group roundly rejected my expertise in knitting and fish-keeping, and after spending the better part of two days attempting to come up with a topic that didn’t involve the internet, we finally settled on writing instructions for polar-aligning a telescope. This suited me, since I had a long astronomy phase, and one of our members grew up in Montana glued to his telescope, so we seemed set. He would write the instructions out from memory, I would illustrate, and the third kid, who showed up to class spottily, would do layout. Stage One went off without a hitch. Stage Two (ie. me vs. paint) was a bit slower in coming. By 3am on Tuesday I had beautiful graphics based on illustrations I’d found on the web, and sent them off to Mr. Layout, only to hear back from Mr. Owns-A-Telescope when I got to work at 10 that I’d illustrated the wrong kind of telescope( which can’t perform the task we were describing. Oops.). So, after getting home from work, and receiving Mr. Layout’s part with the instructions to “just brush it up however you want to” — never a good sign, I had another 5 or so hours of re-Painting and re-Layouting before I could head to the 24 hour Kinko’s. The guys there seemed, to put it mildly, surprised to see someone pull up. They were working on multi-thousand copy jobs, and I don’t think they get that many requests for single prints, let alone at 1:45 in the morning. Ah, to be the spice-it-up girl.

That said, I *love* card stock and spiral bindings. It makes me want to do this with every aspect of my life (the shopping list?). 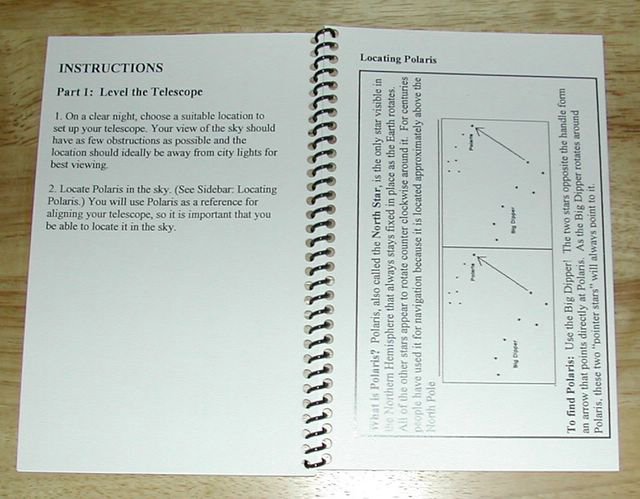 We’d decided that since our instruction manual would theoretically accompany a many-thousand dollar purchase, we could go for presentation over economy. Combined with other fun touches (big font for reading at night with a flashlight, card stock to withstand being stuffed in a pocket, spiral binding to make it easy to hold, sidebars to explain technical terms, etc.), it was SO pretty when done.

But seriously, what else could I use this on? Recipes? Knitting patterns? The mind boggles. 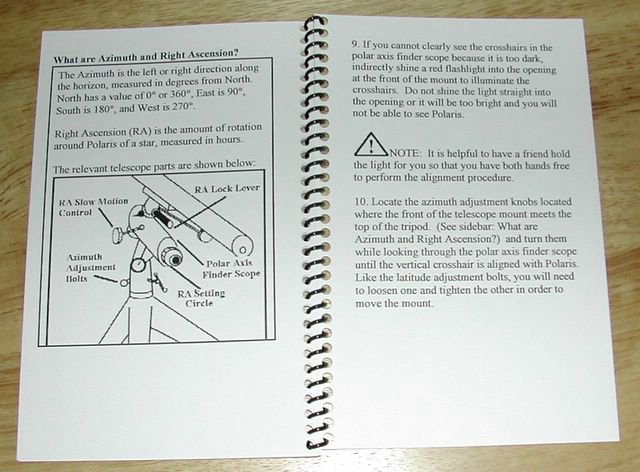