I’ve been complaining for months that my digital camera (a three and a half year old Nikon Coolpix 775. Ooh.) just doesn’t have what it takes to capture any details in the fish tank. I can take thirty pictures and only come up with one or two that are blog-worthy. Since the fish tank and equally detail-focused knitting compose roughly 90% of the photos I take, this seemed like enough of a fault to consider moving up to a newer model. This seemed a bit wasteful, because it really is a great camera otherwise. It’s relatively big, which I find makes it easier to hold and easier to take steady pictures, it’s decent in low light and great outdoors. The battery probably needs to be replaced as it’s started losing it’s charge increasingly rapidly, but when it was new would last for weeks. But, all in all, the lack of detailed shots was too big a problem to ignore.

Then, on Friday, I came across an old article on taking pictures in a fish tank. Most of it was either not likely for me (ie. buy a tripod), or something I’ve already actively ruled out (my camera blurs everything and the colors are off if I don’t use a flash). However, it brought up something called “macro mode” that could be used to take pictures of detailed objects close to the lens, and sure enough, my camera has one (marked by a tulip, as they said), and it works perfectly.

So, on to beauty shots of the fishtank:

Even though you wouldn’t expect the mushrooms to be super-active, ours are always showing up in new odd poses. When I came downstairs on Saturday, two of them were curled up like trumpets. (One to the bottom-left is in profile, and the other in the middle is pointing right at the camera.) I have no idea what caused them to do it. Within a half hour, they’d flattened down like usual. 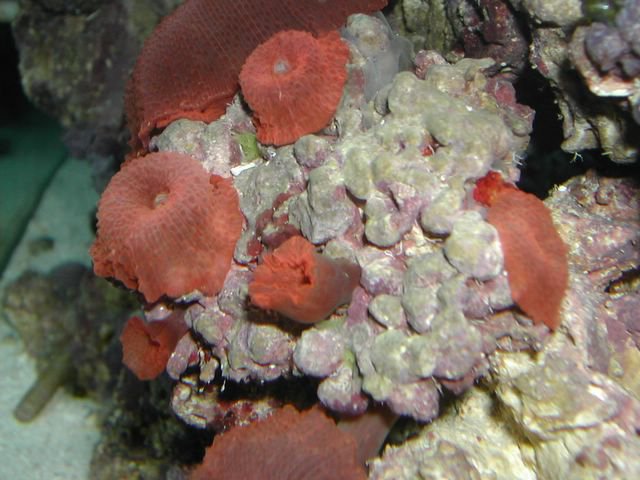 I was so impressed at the way that those pictures came out that I tried taking pictures of two of our new zoo colonies. When I moved the rocks from one tank to the other, I had to cut both the orange zoos and the sunflower zoos as they’d started to spread to new rocks. (Yay) After cutting, both of them left one big zoanthid and one small bud on the larger rock. Now, two weeks later, both colonies are up to four faces. 🙂

However, the truly exciting shot was the one of the green star polyps, which as you may remember, I had given up on ever capturing adequately. But, thanks to macro mode, may I present: 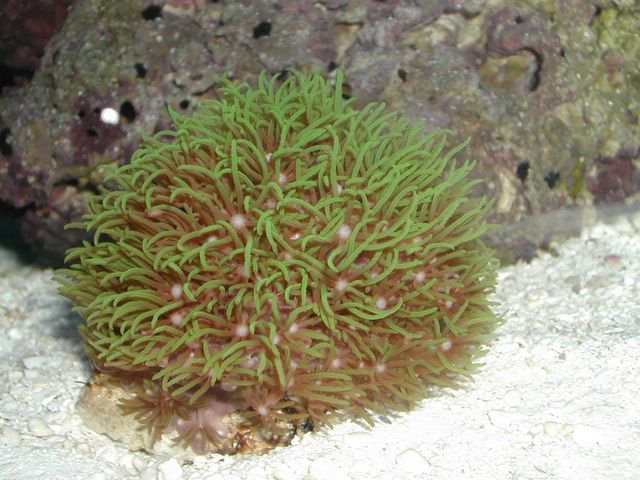 * A bit of lingo from my technical writing class, RTFM can be politely translated to “read the fine manual.” I swear I did, cover to cover (it’s just my personality), but apparently bits of it slipped through the cracks. Clever me.