Thanks for the comments on the too-cool tulip mode. I was playing more with my camera last night after I found this online manual. I didn’t have time to load any of those pictures this morning, though, so instead a story:

On Saturday evening, Kevin was watching the shrimp and was surprised to discover that he had a food pouch under his stomach that we’d never seen before, and that he kept rearranging the contents of it. I came over to look, and having eaten lobster and avoided the green under the tail, thought that actually “he” was laying eggs! There looked like a few hundred small yellowish-white eggs, that he kept combing through and shuffling. He (I just can’t change the gender mentally. Just like I keep calling Clack “he” and Click “she” even though I know it’s the other way around.) spent the rest of the evening digging through the pouch, and by the morning they were gone. You can see him arranging the two full yellow pouches on his stomach here, even though the individual eggs are too tiny to see: 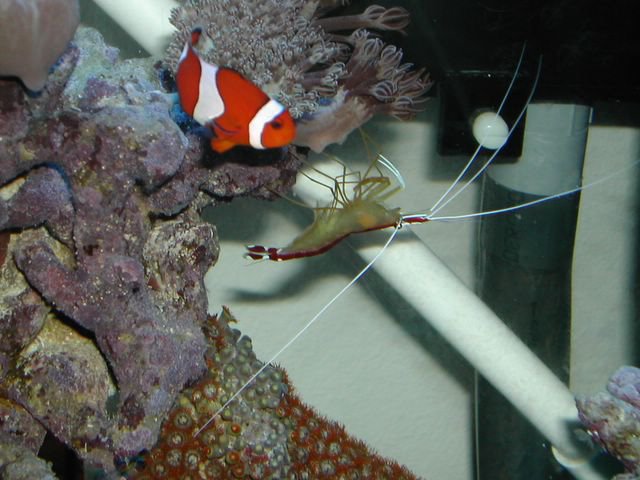 We briefly felt bad that “he” was lonely and had no one to mate with, but came to our senses. 55 gallons is too small for a pair of shrimp unless they’re already mating and friendly, and we don’t want to introduce a suitor that would just be eaten. Plus, we aren’t interested in breeding, raising, and selling baby shrimps (even if it can be done in captivity?), so this is really just yet another fascinating thing that happens in our little world that won’t carry through the way it would in the wild.

But still, how neat!

PS. This was supposed to be a knitting post, showing you a completed back to the cable sweater. I knit a ton yesterday: to class, during the 45 minute wait when the bus didn’t come, back from class, during the Eagles game, before bed, and finally finished it. But even with the five inches I added to the bottom, it’s still a good six-to-seven inches short. I think the pattern’s missing a repeat of the 27-row chart. So, before I could take a picture or spend too much time thinking about it, I ripped back to the beginning of the shoulder decreases. I’m debating whether I should take it back even farther, but that’s just so depressing. I was so excited about the idea of blocking it before bedtime.