I’ve always been a believer in keeping things more-or-less in their place, and then succumbing to organizing fits when they strike. I’ve kind of been due for one recently, especially with the addition of new shelves and a recent room re-organization. When Kevin was building his computer, we also switched our desks, so that now I fit in the alcove, and his desk T’s against the wall. That move created a ton of paper and debris, and I hadn’t gotten around to sorting everything. I bought a new set of shelves (to hold the new printer!), and had gotten them set up, but still had stacks of paper piles around them. Before leaving for Boston, a mood finally struck and so I stayed up way too late and finally got everything in its place. I was able to recycle the printer box entirely filled with unneeded paper, get everything into binders, send off a ton of mail, and clear my desk of about 20 post-it’s worth of to-do lists. Utterly satisfying. By that point it was a bit past three and I still had three complete and empty shelves to fill, so I started in on the college-textbook/sewing-and-knitting/postcard-collection/random-unfiled-memories corner of the room. A mere two hours later, it was all folded, filed, or recycled away. I have a good forty books to either throw away (the Visual Studio 2000 users manual) or sell. Does anyone know of a good used bookstore in the Seattle area? I’d love to do one trip!

Near the bottom of that pile, I found my red fingerless gloves. They’ve been sitting there (at 95%, according to my progress bars) since January 28th. I started them with the last bit of the red Cotton Fleece, just to finish out the football season. (By now, this yarn can be credited with two Superbowl championships and a World Series for Boston. Not bad.) The pattern was of my own invention, and relied heavily on three lace patterns from my stitch reference. After starting the second glove, I realized that I would never finish with the amount of yarn I had left, so I shortened the first one to give it a better shot. That’s where the project stalled.

So, with adrenaline at 5am, I picked up the needles, found my pattern notes, and started knitting again. This time I ran out of yarn right before putting the back of the hand and the palm on holders to work the thumb. I blocked the thing before finally heading to bed, then sewed it up once I got back. I think if I modified the fern lace to be four stitches wider, and subtracted that from the 2-stitch purl borders on each side, this would be a fun sampler-pattern to work on again.

Here are the tops: 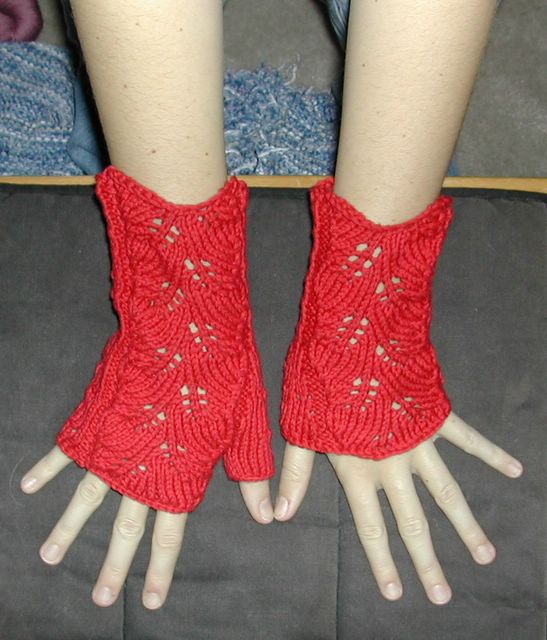 I love how the lace pattern makes the arm-edge scallop.

And here are the palms: 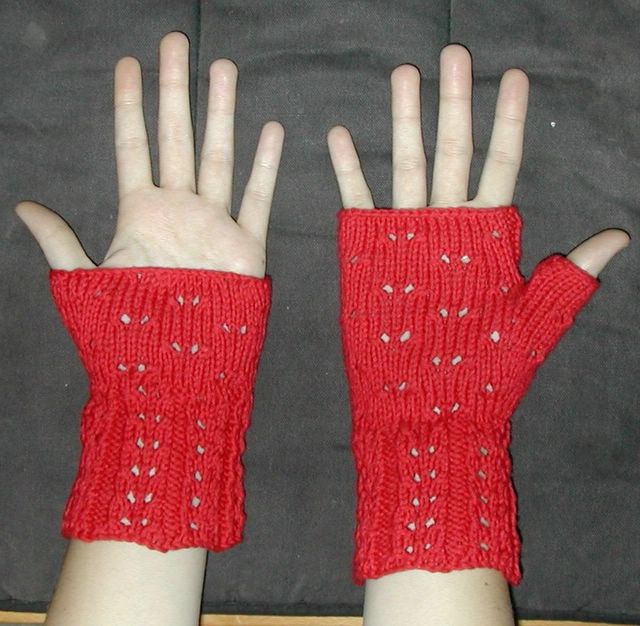