1. My job is to run daily tests (called BVTs) on software that people can use to make user interfaces (UIs): all of the windows, buttons, menus, graphics, media, text, etc. One of the things that we have to test is that all of the layout and items still work correctly in different languages and computer cultures. Windows comes in different versions for different languages, and so I regularly test on Turkish, Japanese, Arabic and Hebrew to verify the different alphabets and orientations work. Running the tests themselves isn’t super-difficult due to the tools we use, but working on a computer where nothing (the start menu, file names, dialog boxes, the “OK” button, the “send” button in email, etc) is in English is a challenge. It’s kind of like playing memory where you were a kid. You have to remember based on position and order (and sometimes icon) which buttons and links are which. It’s surprising how doable that part is. The problem, as people who have travelled internationally can attest, is that the KEYBOARD in other places is layed out differently and these international OSs expect that. All of the brackets, slashes and symbols are always different, and a lot of the letters aren’t in the correct place either. So you’ll be typing along on your English keyboard, and the most wonderful nonsense will be appearing on the screen.
Yesterday, for the first time ever, I worked on a Czech build. And thus the mystery: Where is the backslash??? I need to type “” about a zillion times to run my tests, and it just wasn’t to be found. Luckily, google saved the day on this one, and I was able to use this.

2. A bunch of my brown friends have been getting together weekly to make dinner. The week it was at our house, Jon Warman brought some garlic. (A bulb? It has three cloves left and is half gone. What do you call the thing?) I always just buy garlic pre-chopped in little jars, but he left it with my onions in the bowl on the counter. Imagine, then, my surprise when I looked in today and saw this: 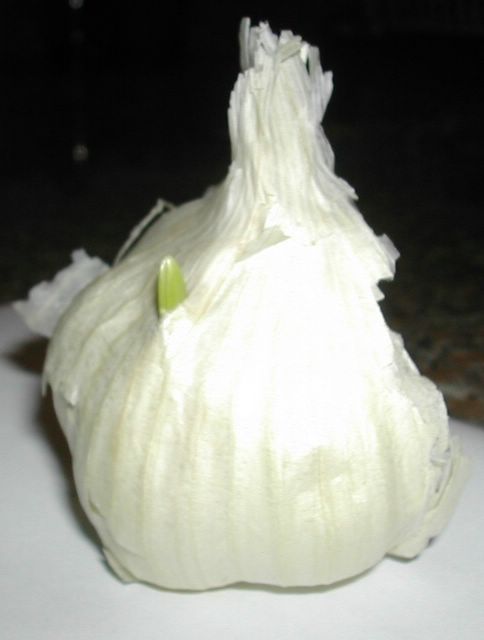 Woah! Does this mean I can plant it? Will it flower? Does anyone know anything about garlic sprouting?

3. We have a new mystery item in our fishtank. I saw it peeking up through the sand, looking sort of flowerish, around the side of a rock. I tried to move the rock in front of it so that I could see it better, and it disappeared, so I started clearing the sand and it kept retreating. By the time I got to the base, it was clear that it could stretch a few inches, or else must be mobile. Here’s a picture of it in full retreat, taken from under the tank (the bottom is glass): 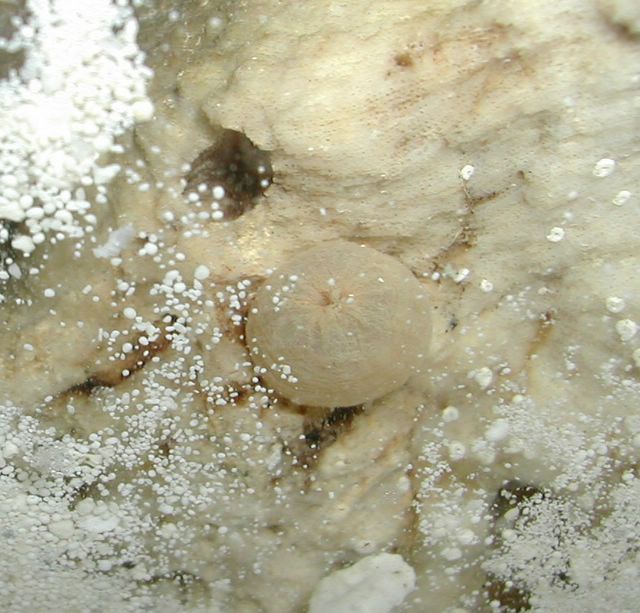 For scale, that’s about 3/8″ in diameter. A few hours later, once I’d stopped pestering it, it started to come out. (The glossy bubbles next to it are air bubbles from when I was using a turkey baster to clear the sand away.) 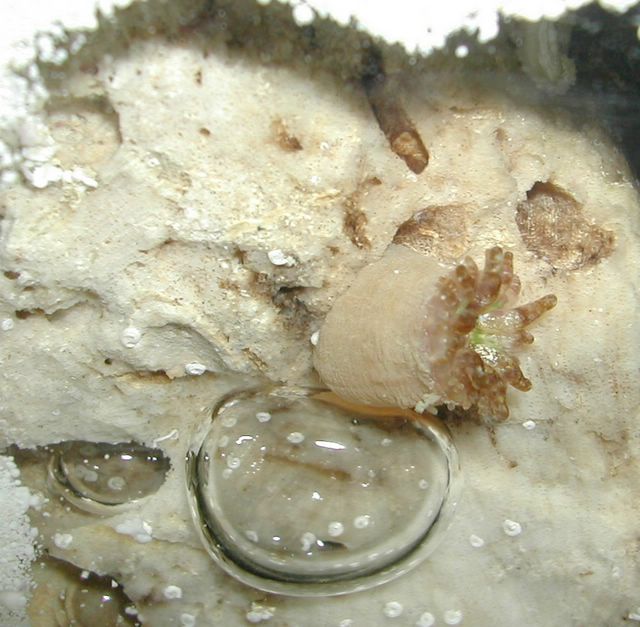 What in the world can this be? It doesn’t really look like Aiptasia. Some sort of nuisance anenome? Definitely a cnidarian, but what kind?

And in the meantime, it’s snowing on the Eastside. Huge beautiful flakes. It’s only mid-thirties, so they’re melting when they touch down, but it’s so peaceful looking nonetheless. Yay, snow.

4 thoughts on “Life is Full of Mysteries”