Somehow I’ve managed to find another project for myself.

We’ve been in our apartment for nearly a year and half. The layout is a kitchen, living room, spare bedroom and spare bath downstairs, and our bed and bath plus a large “bonus room” upstairs. When we were looking (we flew out for a whirlwind weekend to find an apartment a month before we drove out to Seattle for good), we wanted a two bedroom apartment, on the theory that our computers needed their own room, and that we might want more space from each other than a 1 bdrm would provide. This was our favourite apartment by far, and it came with the bonus room (This seems to be a Seattle thing — I’ve never seen them before. For those unfamiliar with the concept, it’s an open room that doesn’t have a door of its own, usually open to the stairwell and on the second floor.) So we ended up with more space than we needed. And no real furniture to fill it, but we used the downstairs bedrooms as a sort of project-and-fishtank-extras holder and had both of our desks upstairs. A few weeks ago, Kevin cleverly figured out that the bedroom downstairs has a door and so would be a great place to move his xbox and music so that we could both listen to our own things, so we moved his desk and zillions of computer parts downstairs, and moved the futon upstairs, so that now the bonus room just has my computer and bookshelves and a nice big reading area. Win-win. 🙂 In this spirit of beautification, I started looking for footstools to go with our butterfly chairs (also in the bonus room). We have one Ikea chair with a footstool that I bought off one of his friends after college, and since we moved we’ve been carrying that footrest up and down stairs depending where we want to sit that day. It’s not heavy, but it is cumbersome and it seemed a bit dumb. However, after looking online for an afternoon, I remembered why we didn’t have a pair of footstools for the butterfly chairs already — they’re wildly expensive. Cheap looking ones start at $50 each and they go straight up from there.

Luckily, I am not afraid of a project (or unluckily, depending on how much you enjoy uncluttered carpet), and so I found two old barstools in the classifieds for $15 to convert into footrests. The guy was very conscientious about making sure that we realized that they were a bit rough-looking. I in turn didn’t tell him that I intended to saw them apart. 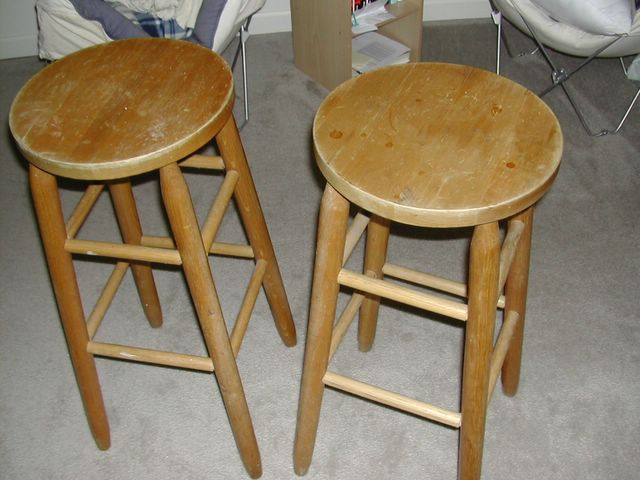 The saw has been getting a lot of use recently. I finished this up on Sunday night before Grey’s Anatomy… 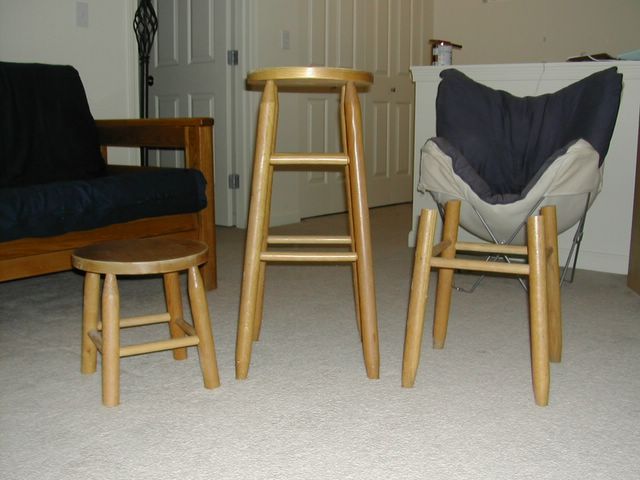 … and then added a coat of paint: 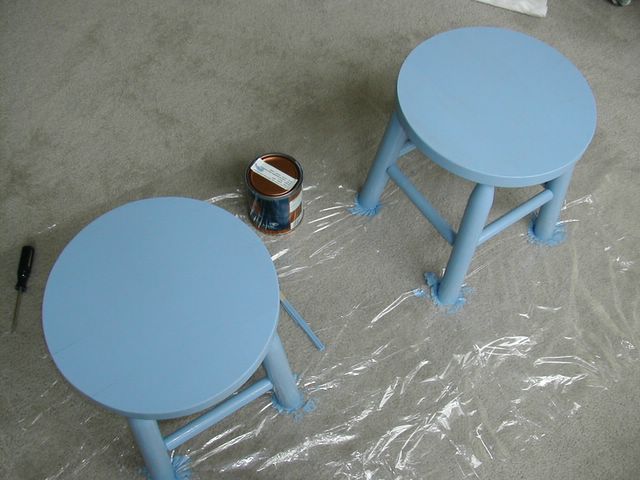 The color didn’t come out at all — the picture looks sky blue, but really it’s periwinkle to match a throw that I bought a few months ago for the futon. I tried taking more shots at different times of day but didn’t have better luck.

Now, the final step is to make a round cushion for the top of each, and matching square pillows for the futon to tie all of the parts together. I have the fabric cut and ironed, and am waiting for a bit of sewing inspiration to strike. 🙂