At knitting on Wednesday night, a certain someone described her feelings on clicking through to my blog as “Please not a fish post…. damn!” So, since this is in essence a fish post, I will first placate the knitters with a picture of kevin’s second sock, now at 5 5/8″. 🙂 Ooooh: 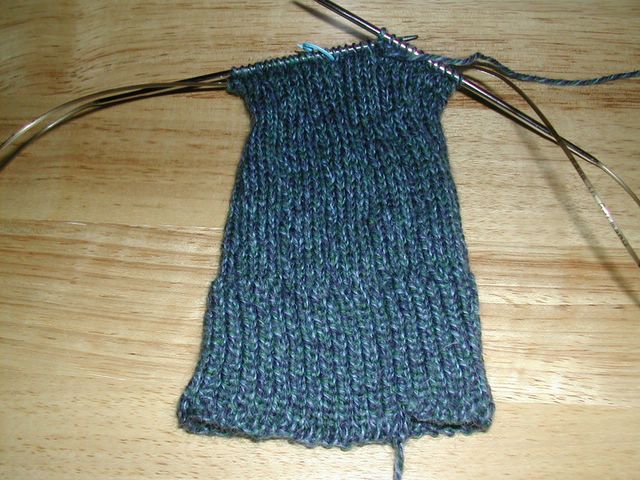 You would practically think my needles had wings.

And now onto the mysterious and wonderful world of the fishtank…

We’ve known for a while now that we have a rogue crab living in our rocks, which was hairy, seemed to eat algae, and definitely was not intentionally introduced to the tank. Usually you can see a hairy leg or two in one of the center rock’s crevices, and at night once the lights are out, you can even see his claws. (As a former ocean swimmer who used to keep her feet up lest a crab run over them, crabs still aren’t really my thing…) Since coming home from the PA Christmas trip, though, I hadn’t caught a glimpse of him and feared the worst. Yesterday, I came home from work to find this guy upside down in the sand next to the sunflower zoos: 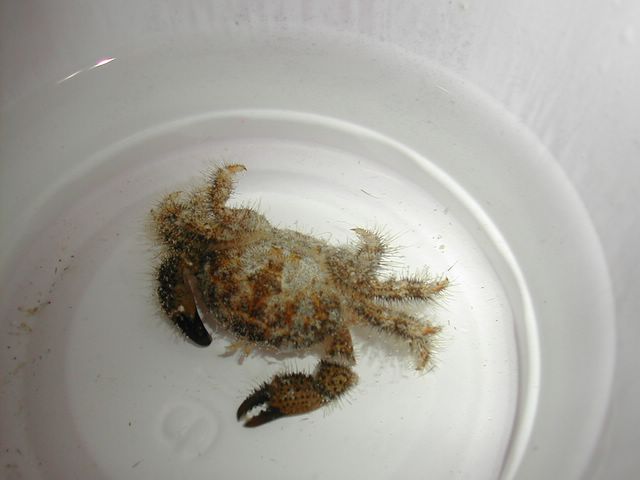 I’ve been sad since — I liked our mystery crab, in a not-wanting-to-touch-him sort of way. But last night, what did I glimpse while feeding the crew but a hairy leg in a familiar hole in the rock… So we had two?! Kevin’s afraid that they mated and one killed the other, and now we’ll have dozens — is that just a spider thing, or do crazy hairy crabs do it too? And does anyone have the slightest clue what kind of crab this is and whether it’s actually reefsafe?

3 thoughts on “This Ought to Satisfy Everybody”