Here we are on day five, and I am desperately close to finishing ball one of four: 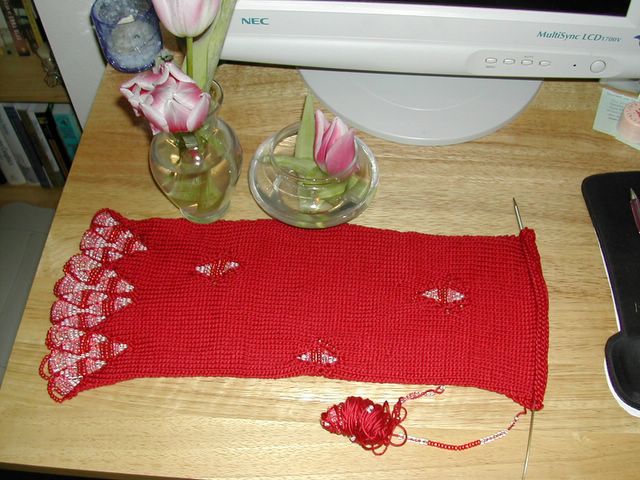 (What *will* I use for props when the tulips finally give up the ghost?)

I strung enough beads for eight diamonds, which has proved to be way too many. This realization should make things move a lot faster on the second side of the scarf, since I won’t have to pause every few rows to move the beads out of the way. At knitting tomorrow, I’ll transfer three or so diamond’s worth over for ball two, which shouldn’t be as onerous.

I stopped using paired M1 increases on the final diamond in favour of knitting on both sides of the stitch, and I’m much happier with the result. My early diamonds were a little bit skewed to the side. I never thought I’d see the day when M1 wasn’t the magic fix!

And now, again, I cut short for bed. Too much Olympics-watching for the girl who is now expected to be at work by 8:30 am (eek! What happened to 10ish?).

One thought on “Olympics: Day Five”