Hmm, it didn’t take long for the daily Olympics status updates to go by the wayside, did it?

I have vague excuses: new job tuckered-out-ness, went swimming for the first time in two years (wow, I remember myself being speedier than I am now! A basic 2000 in 45 minutes never used to be this hard!), read Memoirs of a Geisha, Who’s Teaching Your Children, and started the Mists of Avalon, and watched way too much Grey’s Anatomy…

The tulips finally stopped being pretty, so I don’t have them to jazz up the knitting anymore. Unfortunately, I didn’t take a picture for Day Six, since I spent way more time talking and eating than knitting at Eastside Stitchers on Wednesday night. After a bit of (real) Olympics and six episodes of Grey’s Anatomy on Thursday night, I had this progress to show, as measured against some of the day’s mail: 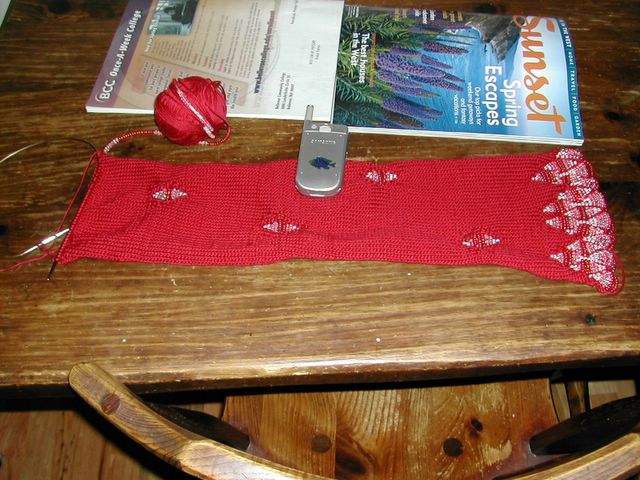 I had to use my cell phone to combat the rolling enough to take a picture. I’m worried that blocking may not be enough to subdue it.

Days Eight and Nine also didn’t manage to end with progress pictures, so instead, I’ll show you two pictures of plants:

On the left is the strawberry plant that I was afraid had died — and now it’s flowering! I’m pretty sure the flower won’t turn to fruit because I don’t see how it would be polinated (that *is* necessary, right? I’m a little weak on my indoor botany…), but I’m so happy with all of the leaves and the new bloom. This plant has been making me laugh because it’s so desperate for light that all of the leaves are plastered flat against the window glass. I finally turned the pot this morning in the hopes that it will straighten itself out a bit. The plant on the right was the demo crocus that I bought for Kevin. For a smart kid, he has some major gaps in his world view, which include not being to able to ID Canadian geese and most spring flowers. We sorted out the geese thing a few years ago, but the crocus issue has been an ongoing problem, so I finally broke down and bought a nearly-flowering plant from the hardware store the other day. (Then, when I decided it wasn’t thriving as an indoor plant today, I took it out to the back porch and realized that one of my planters had crocus leaves budding in it!! I planted a bunch of very ill looking bulbs last summer, after trying to force them out of season, just in case they’d turn themselves around. Now it looks like they’re not only still alive, but they’ve spread. I can’t wait until they bloom and I can see what color they are!)

And then, tonight I *almost* finished the second ball of the Olympics Scarf! I was planning to do this scarf with four balls, but after two, here’s the length compared to my plenty-long Branching Out, which I’m reblocking: 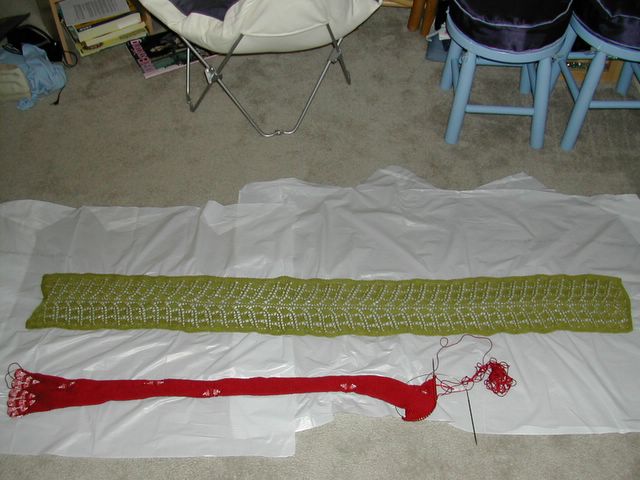 Woah. Looks like three balls will be perfect after all, which means that I may still be able to finish in time for a gold medal! (If I still had two balls left to knit at this point, the Olympic “dream” would be more of a delusion…) Knit on!

One thought on “Olympics: Days Six Through Ten Roundup”