This weekend was wildly productive. (Not the phrase that typically comes to mind when describing my weekends.) I cleaned, recycled cardboard boxes (my natural inclination is to hold onto them, in case they might come in useful, but my apartment only holds so many.), cleaned out my closet and donated three big bags of clothes to the Goodwill along with Kevin’s old skis and boots that were sitting in the hallway, cleaned out my files, recycled two big trashbasket’s worth of paper, vacuumed, finished the yoga bag, and made this pillow: 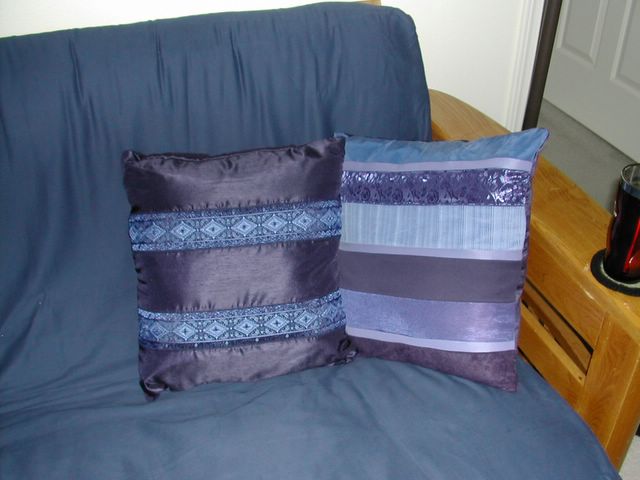 After I made the first two, which I still love, I decided to make a third as a sleeping pillow. The other two are for the most part slippery, fancy fabric, so they aren’t comfy to use for naps. I had enough to make another from the extra fabric I used for the round pillows and the backs of the square pillows, and I decided to line it with fleece, so that it would be soft to lie on and wouldn’t slide around on the pillow insert. And then I added the ribbon, which I bought last year on a lark because it was so pretty. It works really well with the futon and other colors, and though you can see a bit of bunching with the flash on that shiny fabric, the fabric is so dark that it really isn’t visible sans camera.