I always think that Seattle has the oddest reputation for weather. After the long, dark winter we’ve had, I will no longer protest against the cloudy stereotype, but the “rainy” one still seems wrong to me. There seems to be two types of weather in Seattle: grey and blue. The first consists of low, deep clouds, maybe the occasional raindrops, and has everyone reaching for the coffee. The second means the lakes are gorgeous and the mountains are out. But both kinds of weather are subdued, and kind of prozac-ed. You’ll see seven weeks in a row of the exact same thing. You don’t get scorchers, or thunderstorms, or hail or snow. When TV shows (Grey’s Anatomy is guilty) show Seattle as a dark city plagued by driving rain and lightning storms, you know that the computer effects people were working overtime — there’s no cathartic hard rain, and I’ve counted four bolts in over a year and a half.

Which is why, driving home on Monday, I was amazed to see an enormous bank of dark clouds descending on Seattle. It wasn’t a tall thundercloud, but looked like someone had taken a brush and textured them up a few thousand feet. If you saw a photograph, it wouldn’t look real. (I was gushing about them to Kevin later, who didn’t seem so impressed until he saw a shot of them on TV, at which point I think he got it. They looked like something out of one of those climate-change end-of-the-world movies.) I got home, made tea, and took this picture out the upstairs window: 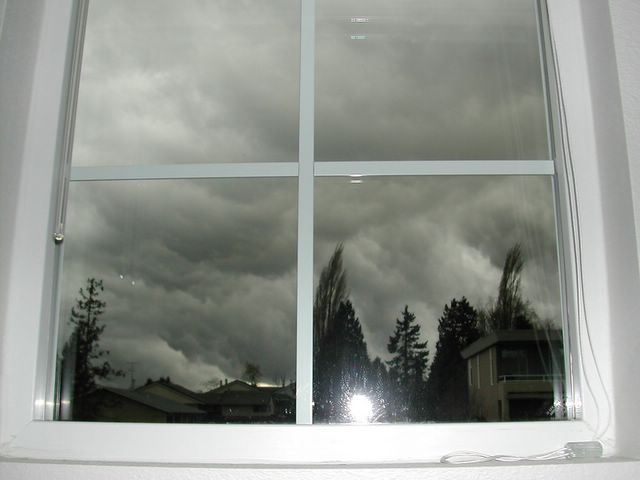 As with the fish, it doesn’t do the scene justice because you can’t see the motion: the clouds were boiling by, and the two tall trees were waving back and forth wildly. True to form, we only got a few drops of rain and no lightning, but I appreciated the drama of it.

2 thoughts on “A good storm”