Today was the opening day of boating season in Seattle. I’ve heard (in an entirely non-primary-source way) that about one in five Seattle residents own boats. A very generous handful of that population was camped out by the UW stadium to tailgate and watch the crew races when we were driving across the 520 bridge this morning. (You can see the weather was cooperating. Such a pity after a week of gorgeous, sunny weather in the 70’s.) 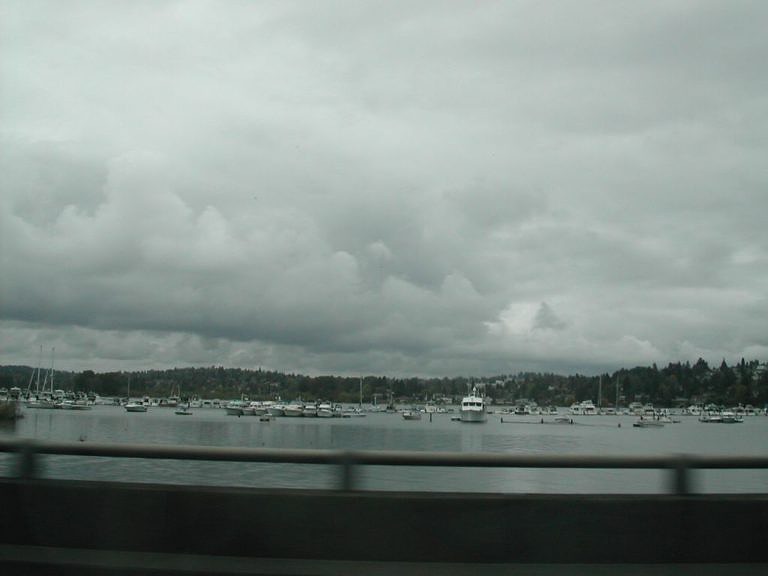 That picture shows about a tenth of the boats out there. It was neat to see — especially the yachts bigger than our apartment.

Why were we crossing the bridge? To head to the REI store in Seattle to buy kayaks! Now that I have my new job and know that I’ll be in the area for a while, I’ve been wishing for one. REI is having their huge sale, with boats 15% off, and car carriers 20% off, and accessories 10% off if you buy a boat, so it seemed to more or less be a sign. 🙂

I don’t know how many of you have been to their Seattle store, but it’s an amazing experience. The construction is one part ski lodge, one part tech company, and one part temple to overpriced sporting gadgetry. I took a picture of part of the entrance with the surrounding evergreen forest and waterfall. Sadly, it’s backlit so you can’t see the loving, willing look on Kevin’s face as he realized I was taking a picture of the store for the blog. 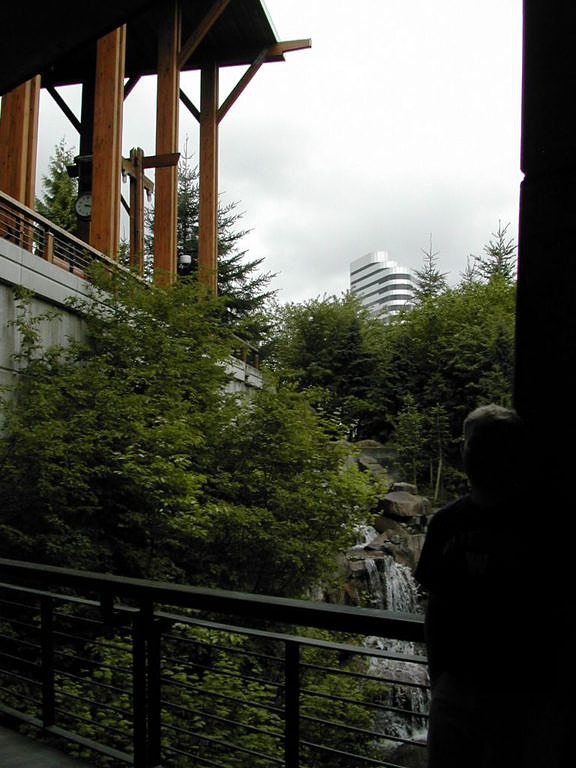 This was the third REI visit in under 24 hours, so we had everything chosen out and just needed to collect and pay for it. Kevin got the Perception Pacifica 12 and I ended up with the Necky Manitou. I was planning to get the Pacifica as well, but the Necky boat fits me perfectly — I couldn’t not get it. Paddles were trickier because they’re so expensive. I’ve had one for years that I love which is a one-piece, aluminum paddle, but I couldn’t find anything even close to similar. We both ended up with 230 cm Aqua-Bound Manta Ray paddles, which were the sturdiest of the “cheap” two piece paddles (which I have to concede will store well). The jury’s still out on these but they felt great at the store. (Knitting aside: I’m thinking about making a second yoga-mat bag to make them easier to carry.) We got spray skirts, cockpit seals (to keep out the enormous spiders that have recently started lurking on our deck and infiltrating the house), and very cool lifejackets.

We also got a car carrier! This was very new territory for me, but I’m pleased with the combination we decided on. For those who haven’t had the fun, you buy a base of bars and towers, and then you buy accessories to attach to those based on what you want to lug. For kayaks, you have the option of laying them flat (like they would be in the water) or tilting them on their side. My car is supposed to hold a 48″ bar, and the kayaks are 26″ each, so lying both flat wasn’t an option. The advantage of the flat, though, is that you can put a saddle in front and rollers in back, and then you only need one (strong) person to load a kayak onto it, so that if one of us wanted to go out by ourselves it would be an option. The guy I talked to yesterday suggested getting a wider bar and then attaching tennis balls to the end so no one took their head out. Kevin (smart kid) suggested that we use the proper bar and a mismatched pair of accessories so that one boat would lie flat and one tilt up. I was impressed at his thinking outside the box. 🙂

We spent an hour and a half in the REI garage assembling the rack. Luckily the first wave of shoppers had left and the mid-afternoon crowd didn’t start arriving until we were almost done, so the top level was almost empty and we could spread out over three spaces. Before: 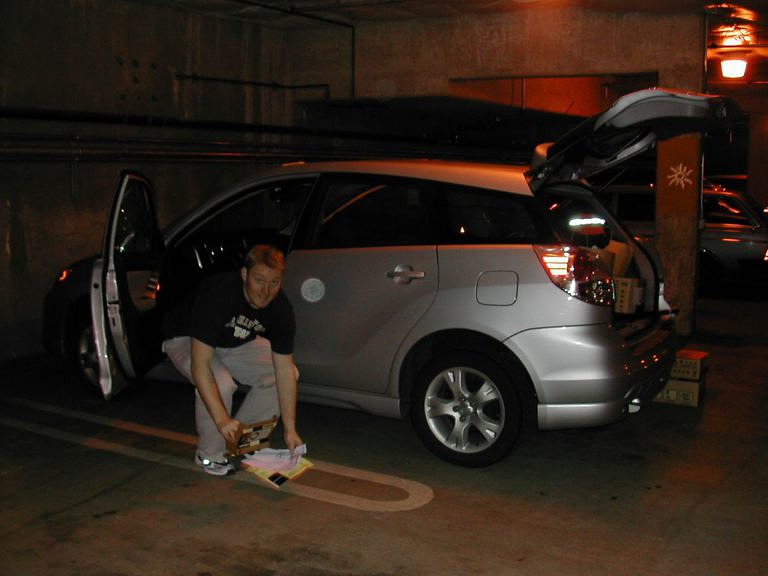 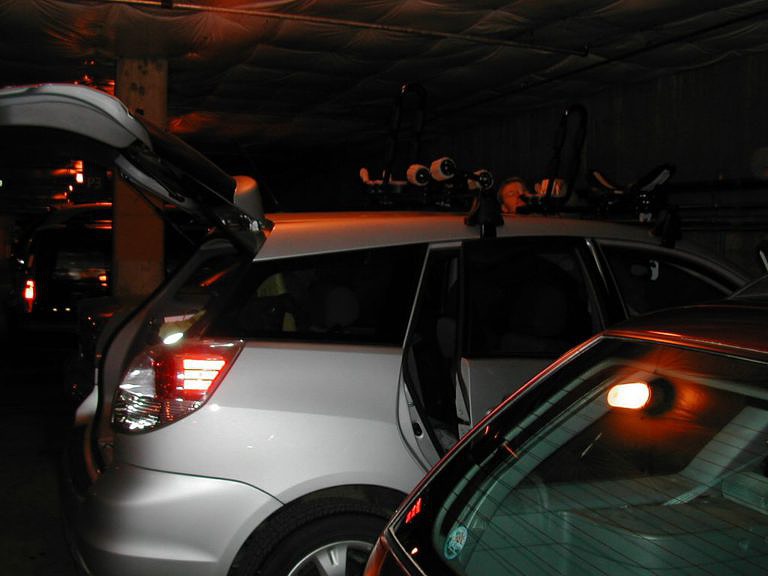 We then went to pick up the boats. The loading dock guy was impressed at our resourcefulness with the mismatched setup, and very amused when we asked him to take a picture with the us and the boats “for insurance reasons.” The drive home was pretty sink or swim — five blocks of city streets and then two highways, neither of which had shoulders and one of which crosses a major bridge. The boats were amazingly steady. I’m aspiring to be the sort of nonchalant person who hoists their boat on their car and goes driving off to wilderness adventures, but for the moment the car rack concept makes me very nervous. Practice reduces panic? We’ll see. 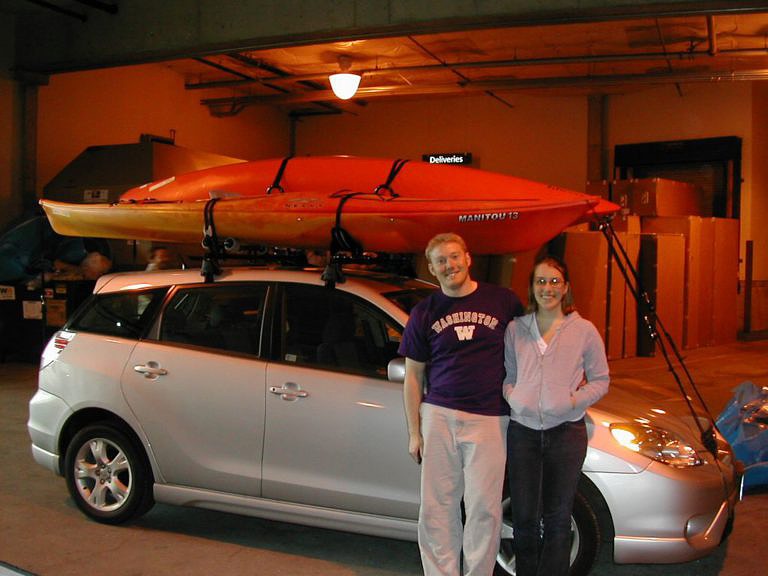 Do you ever have times when you realize you’ve just fulfilled a vision of yourself? When I was out on my Microsoft internship four years ago, zipping around in the red Pontiac Vibe that they rented for me, I was completely sold on the area and the ethos. I remember thinking that I wanted to be working full time for Microsoft, driving a Matrix (same car as the Vibe, but built by Toyota) with a kayak strapped to the roof. I’d just met Kevin, and everything here just seemed so *possible*. And last night, as we were driving back from REI visit #2, it made me laugh that I would be driving in my Matrix, next to Kevin, with two kayaks strapped to the roof on my weekends off from Microsoft. 🙂 I feel like the 20 year old me would be delighted.

2 thoughts on “In the Pacific Northwest spirit”