We had sort of an eventful evening on Monday. It was a bit warmer and the wind died down, so we decided to take the kayaks out for a maiden voyage along the shores of Lake Washington. While it wasn’t that windy, the waves were still big enough to have little whitecaps, which we didn’t realize until we’d tromped the kayaks down the hill (it turns out that at 45 lbs each, they feel really heavy for my fingers — it will get better, but for the moment: oof!). As long as we paddled into the waves, it actually was pretty smooth. The boats are great, I’m happy with the paddles, and I really love the slimmer profile on the shoulders of the lifejacket. We paddled down to Kirkland Center at about a 40 degree angle out from shore, and were just turning around when Kevin caught a paddle on a wave and flipped his boat. I had a brief moment of panic before he grabbed off the spray skirt and got out — I’ve seen people freeze and be too disoriented to get out without help, and I was several boat lengths away. Luckily, he kept a cool head and got out, but then we had a kayak 2/3 full of water and a boyfriend with blue lips a few hundred feet out from shore. We didn’t have anything to use to bail the water (I wasn’t anticipating anyone getting out of their boats and filling them with water… oops. Not so plan-ahead.), and when he tried to get back in, the boat got so low in the water that we were both afraid it would sink, which would have been deeply bad for morale. So, instead, we looped the carrying ropes from the back of my boat and the front of his together, and Kevin grabbed the back of his boat and kicked to keep it straight while I paddled as hard as I could. Kevin kept his shoes on because I was really worried about extra heat loss given the water temperature. It took a brief eternity to get to shore, but we made it, the boats didn’t sink, and Kevin didn’t freeze to death. All of the stabilizer muscles between my ribs still hurt, but thankfully no lasting injuries and hopefully we’ve gotten our kayak drama out of our system. And both of us agreed that as miserable as the entire experience was, it was vastly preferable to the kayaks flying off the roof of the car as we crossed the 520 bridge.

Quite the unnecessary adventure!

(Quick aside: Kevin had his cell phone in his pocket when he landed in the drink. It was quite dead afterwards. My mom had read that someone had “cured” a soaked digital camera by putting it in a bag of uncooked rice which absorbed the moisture. Kevin gave it a shot, and the phone is back (yay!), though the LCD is a bit more psychedelic than before its swim. Worth keeping in mind in case you have similar luck with electronics and water…)

In between setting up the fishtank and falling out of kayaks, I’ve been making slow progress on the quilting. The Olympic mountains are steadily growing — I’m at about half (shown here with my graph paper chart and a thing of tape for size reference):

When I look at the real mountains from my street, their snowy tops are brilliant, there’s a dark line of contrast where the snow line ends, then they gradually get hazier and less vivid as they approach the horizon of the nearer hills. This was my attempt to mimic that with five colors, and I’m very happy with the effect so far. 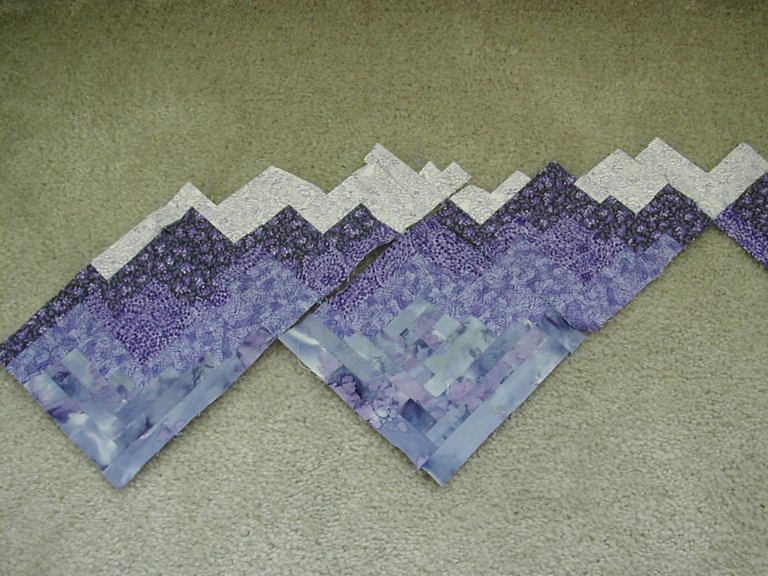 I’m starting to be quite concerned about the amount of fabric left. It’s very hard to tell if it will be enough to finish, and I bought it a year ago so even if they’re still making the same prints I can’t imagine that the dye lots will be the same. Keep your fingers crossed that the remaining squares are more fabric-efficient than I am anticipating!