I turned 25 yesterday. It’s such a nice solid, momentous sort of number. After a few years of meandering, non-event ages (23? what happens at 23?), it’s kind of fun to have a year that really sounds like it means something. 🙂

Since Tuesday isn’t a great day for large scale celebrations, I meant to spend the night quilting, and just put off the celebration until the weekend. Instead, I got to spend the night talking to a long roll of friends and family, which was so much fun. I almost never get to talk to the east coast crowd during the week, and it was so good to catch up with people. Kevin was out, so I didn’t have to feel bad about delaying dinner or plans between the two of us, and it was just a fun evening. (It actually bears remembering for next year — an alternate date celebration is probably better so that I can do my fun phone call roundup.)

So, tonight, birthday-plus-one, I finally got to break out the sewing machine. My progress before bedtime was pretty minimal, so here’s a photo for ambiance. The buds that broke off from my birthday flowers (yay, Kevin!) are in the background. So pretty! The pictures I took of the full bouquet didn’t really come out with the flash, so you’ll have to imagine the rest of the various pretty pinks. 🙂 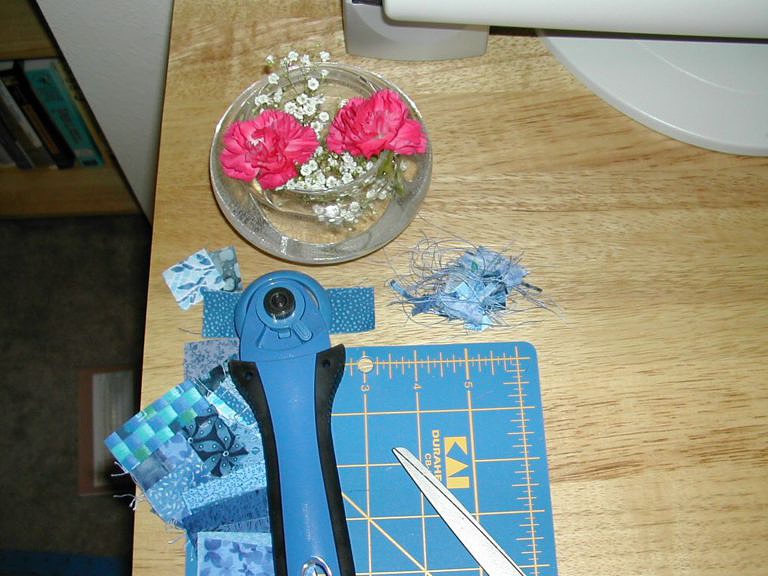 Here’s to 25! May it be as important a year as it sounds like it should be. 🙂

One thought on “Happy birthday-week to me”