I snapped a few quick pictures of the tank last night, since things looked so neat in the “twilight”. (Our daylight lighting is composed of a mix of blue and white light. For about forty minutes at the beginning and end of the day, the white lights go out and everything in the tank looks fluorescent under the blue-only lights. It’s kind of like having a blacklight.)

The first is our Montipora (with the ever-inquisitive Click in the foreground). Earlier in the spring, our calcium had lowered to almost nothing. Kevin (very clever kid) spent a while eliminating potential issues before he identified the problem and since May, he’s been dosing aggressively to push the calcium back up to a healthy level. This montipora was showing the most negative effects from the plunge — all of his mouths were closed, and the pink was actually retreating. He’s come back completely, and is now actually growing. (You can see the white new growth at the tips at the upper-left and upper-right! yay!) 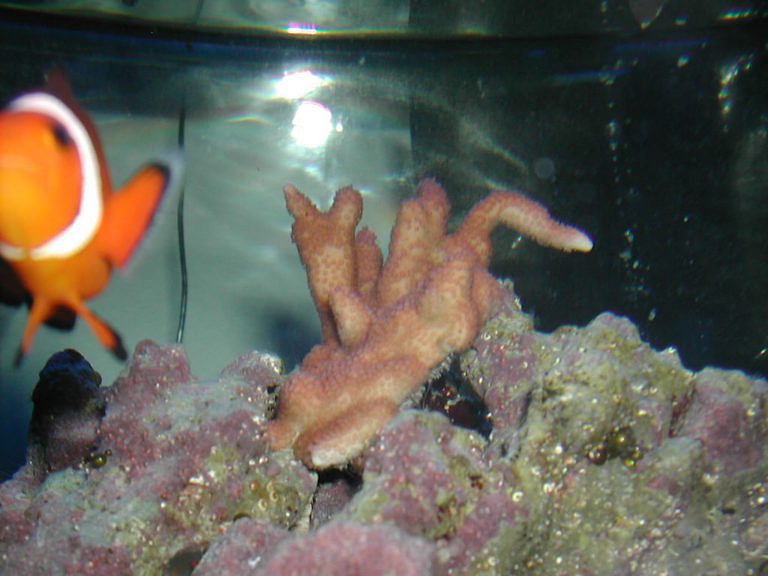 It’s so frustrating when creatures in the tank aren’t looking healthy, because it can be so many different factors. Most of it is trial and error. Is there some trace element built up in the water? Missing from the water? Is the lighting too much/not enough? Is there too much/not enough water flow? Are the ailing creatures not getting enough of the right kind of food? Are two corals too close together? (Corals use chemical warfare as a defense system.) Is something (fish, crazy hitchhiker crab, unknown tank inhabitant…) eating or pestering someone else? Is the temperature too high or low? Does this creature expect a greater depth (and thus higher water pressure)?

So many different possibilities to ponder, and since our little tank ecosystem is all a web, tweaking one thread can affect many of the other variables. I’m so glad that Kevin figured out the calcium piece and that it’s been a pretty straight-forward fix.

Our one guy who’s never seemed to have these issues is the leather. He keeps growing merrily, and looks particularly amazing in the blue light: 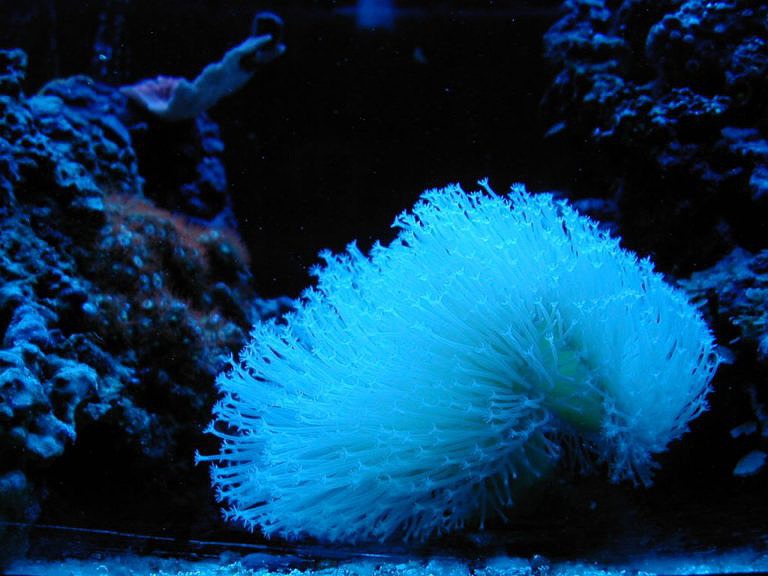 One thought on “Some tank photos”