You ask, and I try very, very hard to comply, but the tang is one speedy little fish. I took 53 pictures, and the bulk of them looked like this: 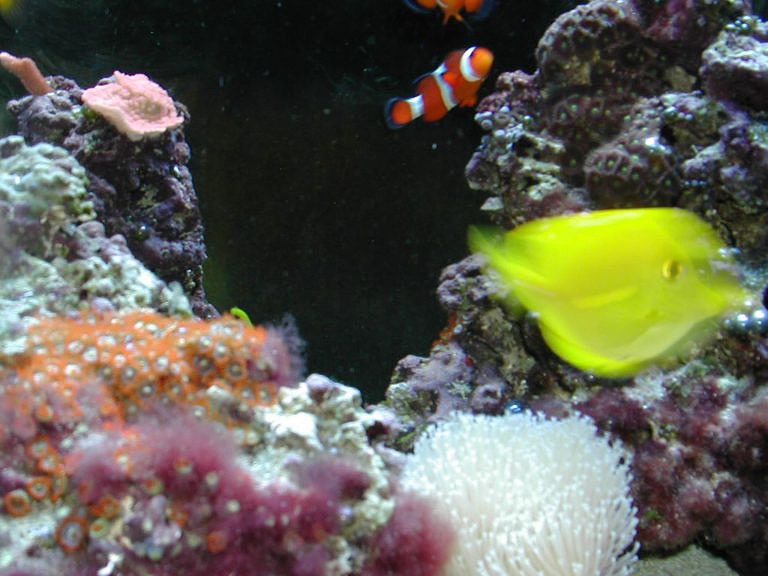 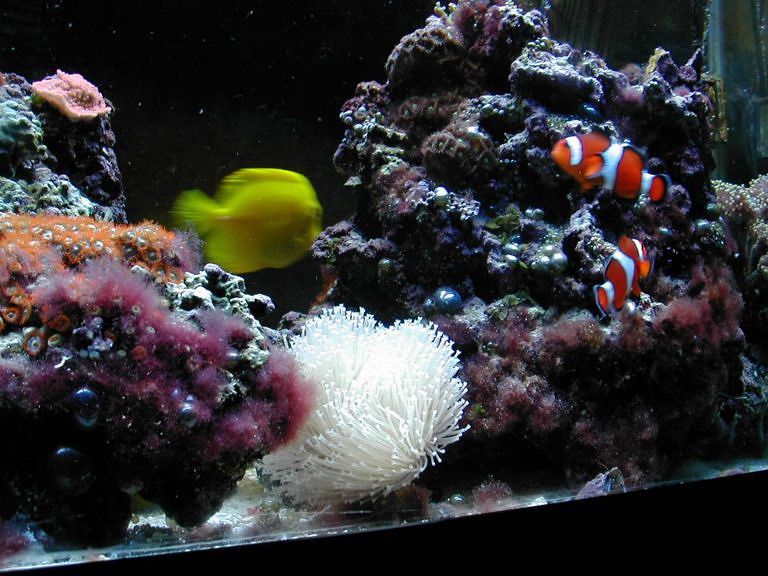 Clearly, he’s in a blurry mood today. When he was new, he was inordinately skittish about daily events like putting in food or cleaning the tank (it makes you wish you could sit him down and explain that it’s all in his best interest). I assumed that he would settle down, but half a year later, he’s as hysterical and scandalized by the sight of me as ever.

That said, he’s a very smart and curious fish, and after 20 minutes of zipping about and hyperventilating, he stopped panicking and started shooting coy looks at the camera. He’s very skinny, and so head-on and tail-on shots visually don’t make sense (and with eyes on the side of his head, there are a lot of tail-on shots as he looks at the camera while zipping away). But then he stopped in what I think of as his “alert pose” — dead still in the water (even with current), looking at something “alarming”, and his fins fully extended in a vertical oval: 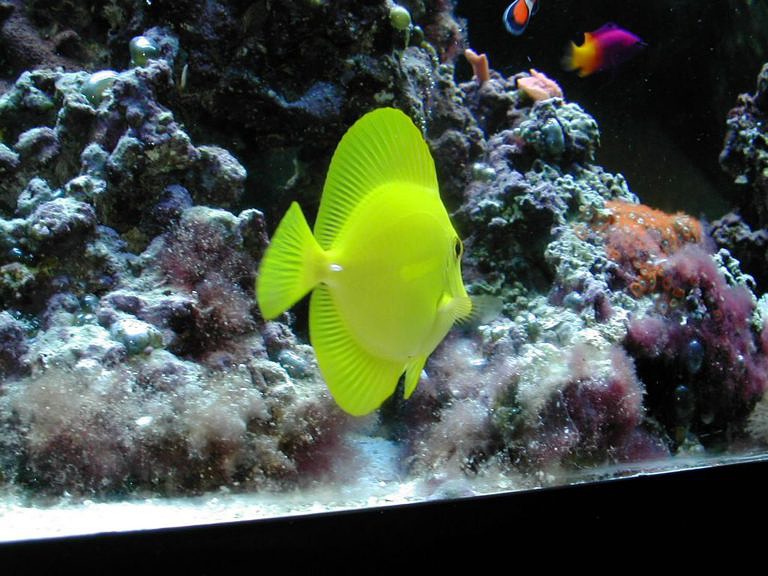 He may look like he’s looking away, but I assure you that those eyes are on the vicious photographer. A minute and a few tank-wide zooms later, I got a more relaxed “alert” pose, though still with eyes firmly on the camera. The horizontal light streak down his side is a typical adult marking. This becomes more pronounced at night (when the yellow body color fades to a white/yellow) or when he’s frightened (he can “lose” his colour then as well). You can also see the bright white “tang” at his tail, which extends away from the body and can be used to spike other fish in defense/pique. He’s quick and wary, and our tank is hardly threatening, but I have seen him use it a few times on the clowns in what seems to be startled irritation. The gramma is too leery of him to get close enough for it to be an issue between them. 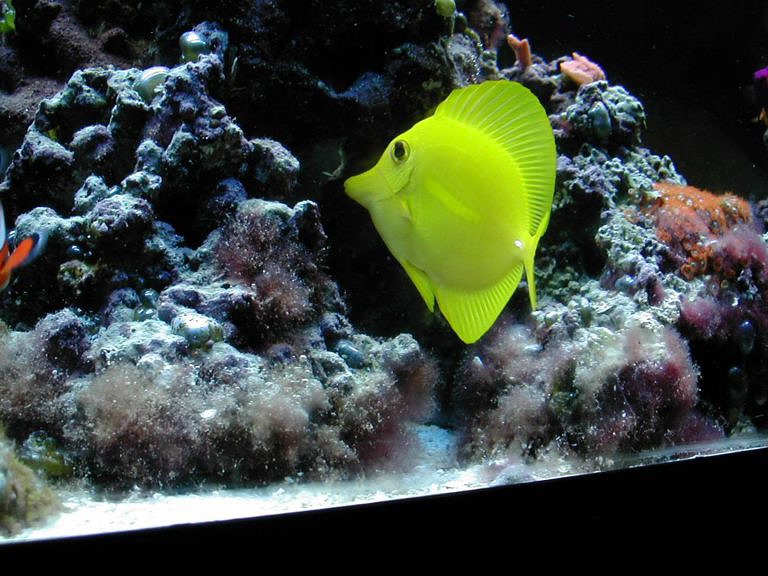 Finally, after 45 minutes or so, I got a more natural pose. The tang uses his tail, and upper and lower fins to steer and for speed. This is a mid-speed turn to his left. As is typical, you can see the gramma heading the opposite direction — there’s really no love lost between the two of them. 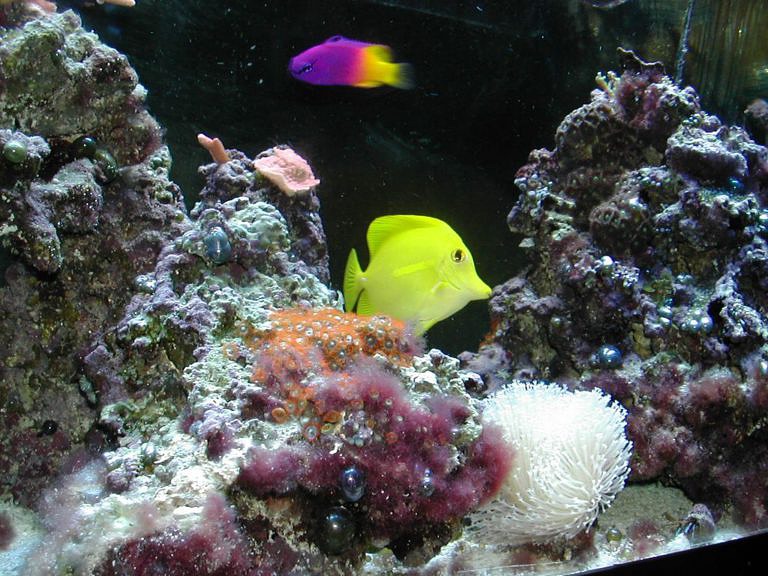 And, I know the color isn’t true in this one (he really is that bright, full, sunny yellow), but this was such an unusual shot in that he isn’t squared to the camera. You can see the shape of his body, his side fins, and the tiger-striped eyes that are very accurate identifiers of where he’s looking. 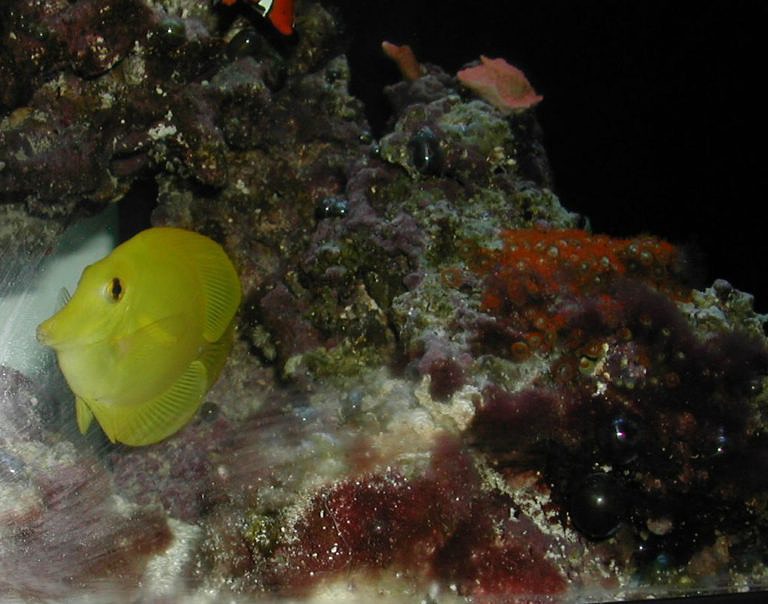