You know when you kind of stall on communicating because there’s bad news, and saying it in writing seems permanent? That’s been the case for me for the blog since the storm. We lost power for forty hours, and the fishtank didn’t do very well. The three biggest issues were heat, current, and light. Over eight hours on Thursday night, the water temp plunged from 79 to 72 degrees. We cranked the (gas) heat, and even though the electric blower on the fireplace didn’t work, the room that the fish were in stayed hot and we were able to slow the temperature drop. However, that big a swing that quickly is extremely shocking to all of our tropical life. The current is important primarily for keeping the water oxygenated, but also for getting waste to the filters and food to the corals. Fish like the tang (and the gramma to a lesser extent) also require high current. And finally, the lights provide food to the corals, balance to the creatures used to their daily “sun”, and the fish won’t eat if they aren’t on.

We lost power just after 10 pm on Thursday. We had candles at the ready, and Kevin quickly found his REI headlamp, and when the temp started to drop and the lights still weren’t on, we wrapped the tank in window insulating plastic (left over from Kevin’s apartment in Boston) and blankets, and cranked the thermostat. (which is aparently battery-powered. smart.) 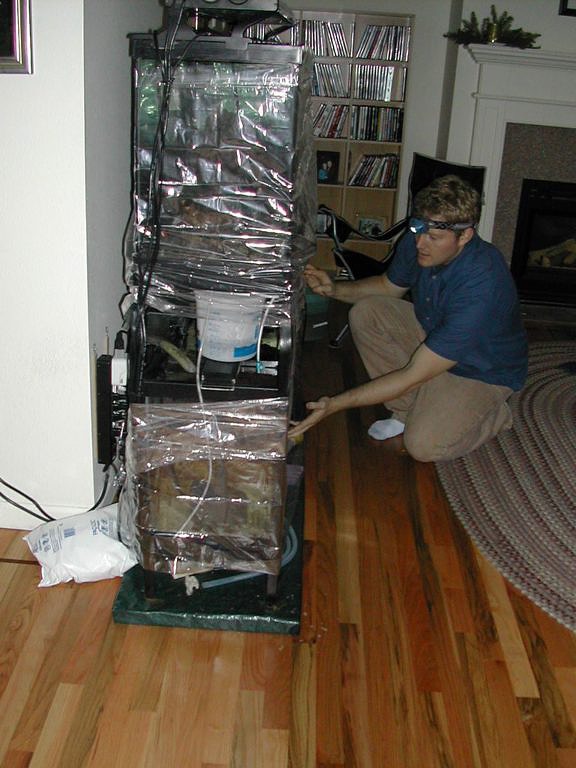 We brought the futon mattress downstairs so that we could be there to monitor the pumps and siphons when the power started back up, since we have almost 100 gallons of water that needed to start flowing again — daunting. The hope that power would be restored overnight turned out to be wildly optimistic. Kevin made it to work on Friday, and called to say not to bother attempting the drive, since all of the power was out on the Eastside. He came back home, and we spent the day cut off — the cell phone towers were down, so even our charged phones didn’t do any good. The tang and shrimp died within the first day. It was incredibly hard to watch and not be able to do anything. We tried to pump a bit of air in with a turkey baster, but to no avail.

We went into Seattle for a while on Friday night to wish our friend Andi a happy 25th birthday, and to use her shower and internet connection (thank you, Andi!! for the company and the civilization!). Driving home across the 520 bridge and just seeing pitch black in front of us was incredibly depressing. Early Saturday morning, Kevin woke up with an idea stolen from beer brewing. If you pour water back and forth between buckets several times, it becomes hyper-oxygenated. The disadvantage though is that it also cools the water significantly due to the evaporation. So we started heating buckets and pouring water, and hoping that we were buying ourselves some time. An hour or so later, my mom called and a tower picked it up for long enough for the voicemail to get through — they’d been looking for solutions for us, and found that you can hook something called an inverter up to a car battery (or even better, a deep cycle battery) and it will provide several hours of energy. She called around until she found one in Puyallup that the wonderful Sears guy held for us, and we drove down to pick it up. We got it home, and were so happy to be able to power most of the lights, most of the pumps, the heaters and the skimmer. We’d been running it for about two hours when the power came back on. Great timing: we didn’t have to recharge it. Here’s the wrapped tank with inverter power: 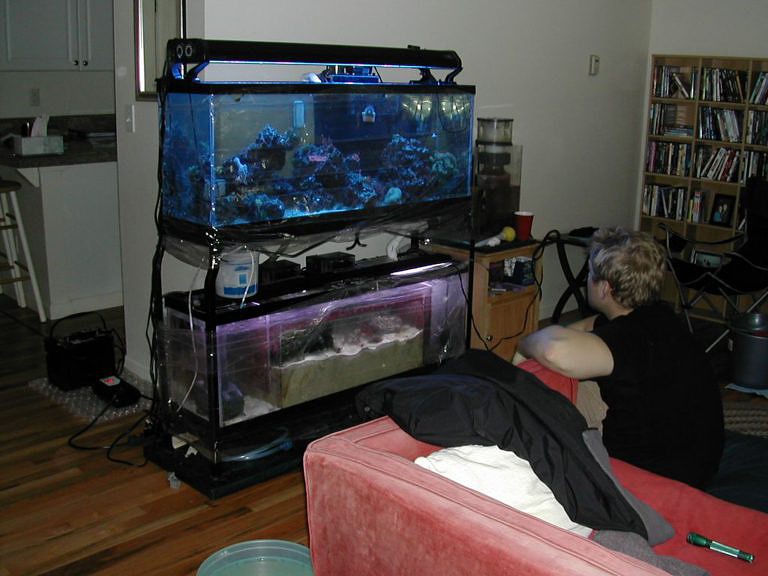 And a picture of the poor clowns swimming together after the inverter power was turned on… It really was amazing to watch the two of them together. They are generally pretty independant now, and then check in with each other every five to ten minutes. When the power went out, they stuck side by side, swam together in unison, and the one would butt the other if they stopped swimming for too long. 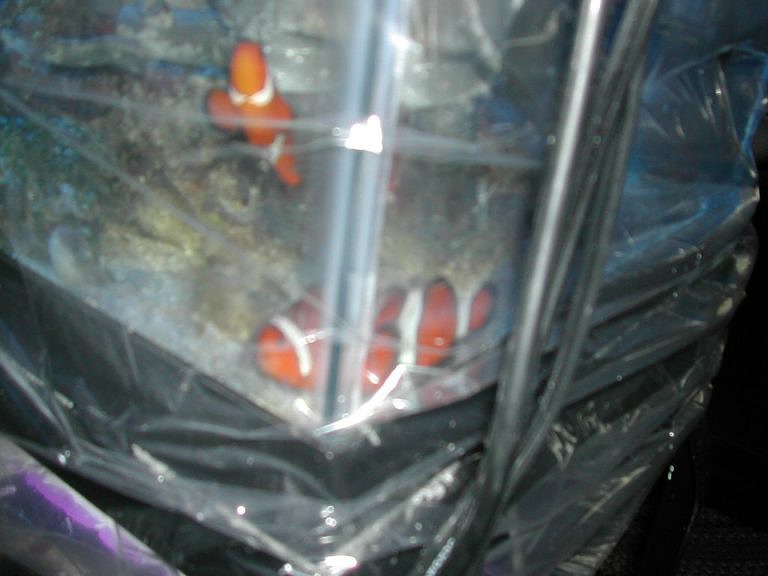 Everything looked horrible for the first day or so. Click and Clack were both alive (but Clack was in pretty bad shape), we couldn’t find the gramma, the tang and shrimp were gone but I still kept forgetting and looking for them, and our corals looked so unhappy. We ended up finding the gramma the next day — he didn’t make it. The xenias all had to be taken out, except for the one in our sump that’s looking pretty happy. They were shriveled and grey, and xenias smell horrible when they’re stressed or dying.

Kevin and I were both very sad to lose the pom pom xenia, which has been growing like mad recently. The leather and torch coral had both retreated and wouldn’t come out — the torch coral took a day to bounce back and the leather finally started looking a lot better yesterday after I moved it closer to the light and into stronger current. Click and Clack finally started eating again on Monday afternoon, and are acting more like themselves by the day. Our two plate montiporas and one branching montipora are looking a lot better, but still not 100%. The acro about half died (another coral that had been growing like mad recently), but we’ve seen a few mouths out on the part that wasn’t bleached, so that’s hopeful. The zoos seem completely unphased — they’re adding a lot of color. The mushrooms looked pathetic, but are now about 90% back. The ricordia is still seeming up in the air — I’ve been keeping an eye on it. And, the one good thing to come out of all of this, the power outage killed about 80% of our red scourge algae.

So, it all could be worse, but it’s been a rough and nerve-wracking week. On one hand, I know that they’re “just” fish, and many people have had much worse things happen, but the livelihood of the tank is so important to me.

Fishtank lessons for future power failures:
1. Use blankets and plastic early
2. Have a battery-operated airstone on hand
3. Use water changes to improve oxygenization of the water, by pouring the over-heated water from bucket to bucket before putting it in the tank
4. Have the deep cycle battery and inverter on hand for backup power.

One thought on “A long, sad post about the tank and the windstorm”