Everyone’s leaving work in droves to get home before the impending Wind Storm of Aught-Six. Traffic has been a disaster all afternoon, so even though I want to go home to watch the Seahawks game, it’s probably better to let everyone clear out a bit first. They’re threatening to close the 520 bridge, power might go out to the traffic lights on the offramps to the highways, and everyone gets sort of freaked about driving here when there’s remarkable whether, so better to stay here for the moment. 🙂

Given that I don’t have much else to post, a quick blogroll of interesting things for anyone who’s also waiting out the traffic:

NotMartha posted such a neat link for constructing amazing things out of large cardboard crates. Since I have happy memories of inhabiting assorted boxes, including a house that my dad made circa the kindergarten years, and a substantial portion of second grade spent sitting in a moving box (with siblings nearby sitting in their respective boxes), decorating away with markers, I think these new high tech rivets are cool. 😛

If you’re going to be waiting for a while, this site is remarkably hypnotic. A collection of every puppy forward you’ve ever received, plus youtube links.

And, finally, a picture of the clowns. Any time Kevin or I approach the front of the tank (such as to clean it, or take pictures of it), the clowns zoom straight to the surface in case any food should manage to be dropped in. They’re very enthusiastic. 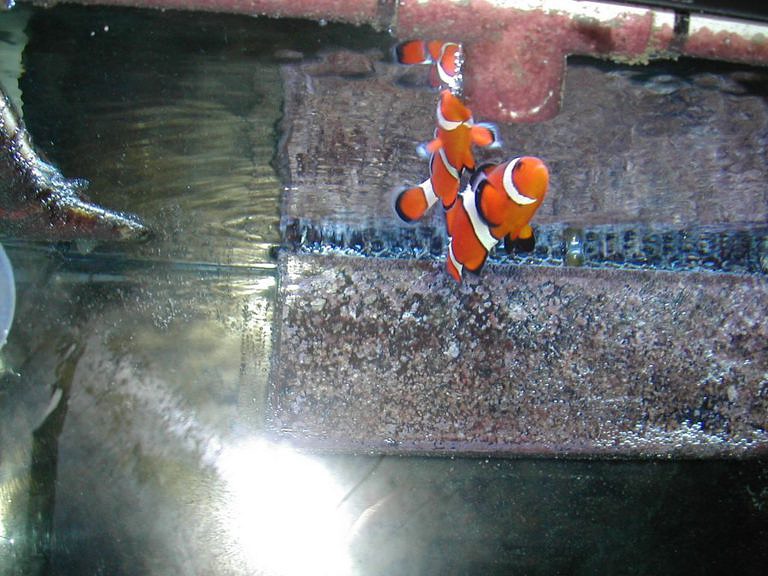 In the foreground, you can see one of the T fittings that’s an output for the PVC sump return that we made. It was all purple and covered with coralline algae after only six months — awesome. We have four other returns, and combined with a stronger pump and a bigger overflow box, they’ve added much better circulation to our system. Fingers crossed that the power stays on, and that the jets, pumps and heaters all keep working through the night!!