The weather has impressed me in the last week. Generally I see Seattle as a place with abysmally repetitive weather, dark clouds, and (no offense) sort of weather-hysterical residents. YET, way after rush hour, we had real snow today, and actual snow clouds in the sky. True, work attendance ran at 50%, but people are getting so much more resigned to snow.

My car, decked in snow: 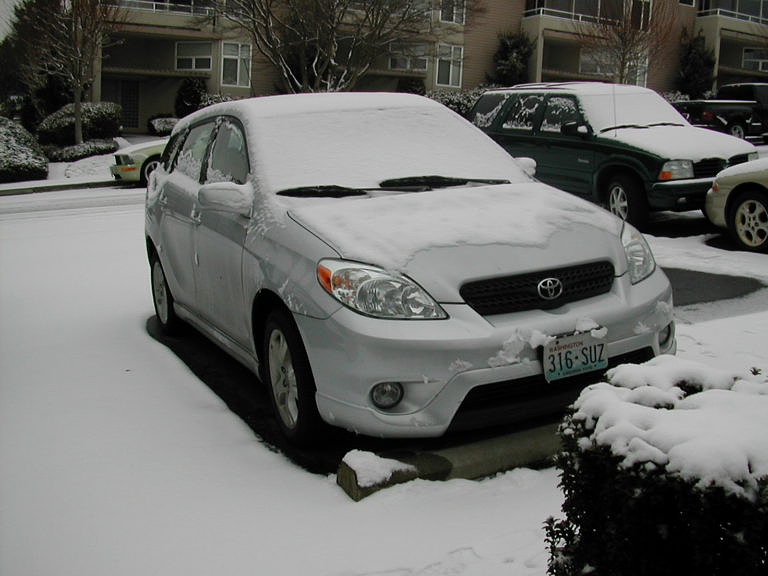 The snow is practically typical at this point! I also took a picture of my view after I turn out of the driveway in the morning. See those snow clouds, all yellow at the horizon? So pretty. It reminds me of driving down Winter Street on the way to swim practice in high school, only with the addition of a lake and major mountains. (Even if I can’t see them, I know they’re there.) Usually at this time of year, it’s just slate gray, with no glitter in the lake, and deep darkness in the sky. I loved the snow clowds, and they lasted for a full day. 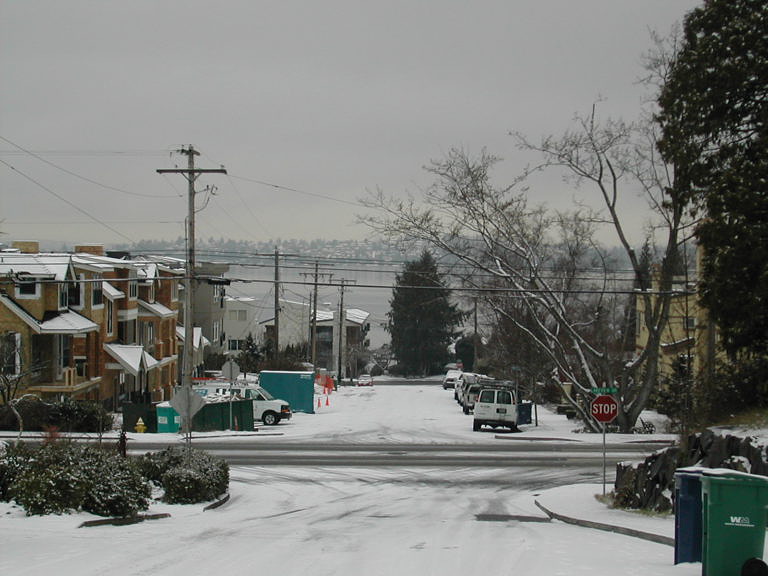 The interesting part of the day was actually via email once I got to work. Kevin was all worried whether I’d arrived intact. His mustang (visible beyond the corner of the 4WD Matrix in the top photo) is not ice-worthy given the hills (it’s really heavy, really powerful, and doesn’t have the tires to be a snow sportscar.) Despite several antilock brake incidents, I really didn’t have a problem taking the backroads to work. Snow is snow. But after he sent a video of the situation in Portland (and I heard that he’d seen two accidents while waiting on the corner for the bus to work), I understood the concern. The Portland home video had been taken off someone’s apartment balcany, and it looked like some sort of car ballet, as all these vehicles slowly slid down hills, off each other, and accelerated downhill offscreen. It looked so controlled, until you realized that there was someone inside recognizing that they had no control at all and were essentially sledding an SUV. Especially with multitude of hills and the lack of plows and sand, it really is dangerous to drive here in certain conditions. Duly noted.