I had a short, short workday on Monday, before leaving for the airport for a conference. 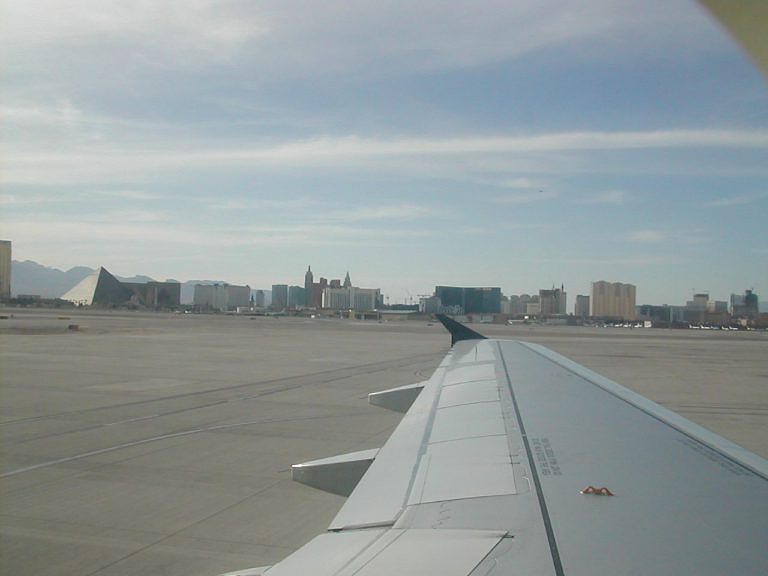 It was my first time in Vegas. I love how it looks like if you hopped off the plane and rolled your bag to the edge of the runway, you’d be at the casinos. I was also very impressed at the mountains — for some reason, I thought that Las Vegas was surrounded by flat desert. The major rocks pushing up everywhere as the plane descended were quite impressive, especially as they were so unexpected. There were huge red areas — some mineral? Quite pretty. (You can see the edge of the city faintly in the background before the next series of mountains.) 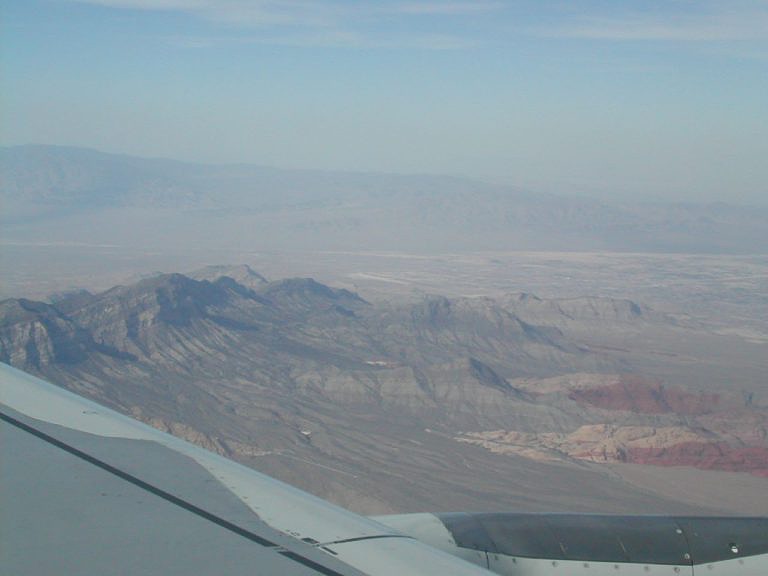 As we flew in closer, I found the view shockingly green. All of the palms, lawns and swimming pools were so bizarre given the brown, tan, and red we’d been flying over. 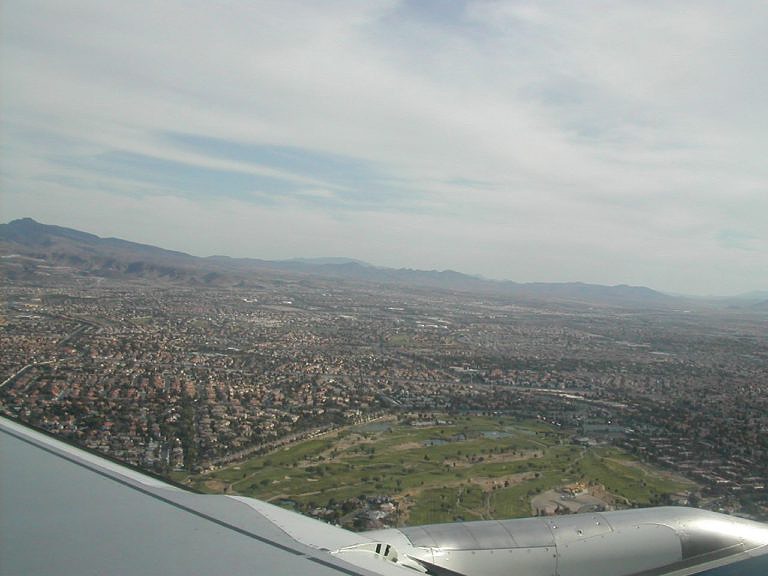 The conference was at the Venetian, and the rooms were enormous. Here’s Kris (Kevin’s roommate from intern days. So fun that he was at the conference, too!) frolicking in my bathroom. 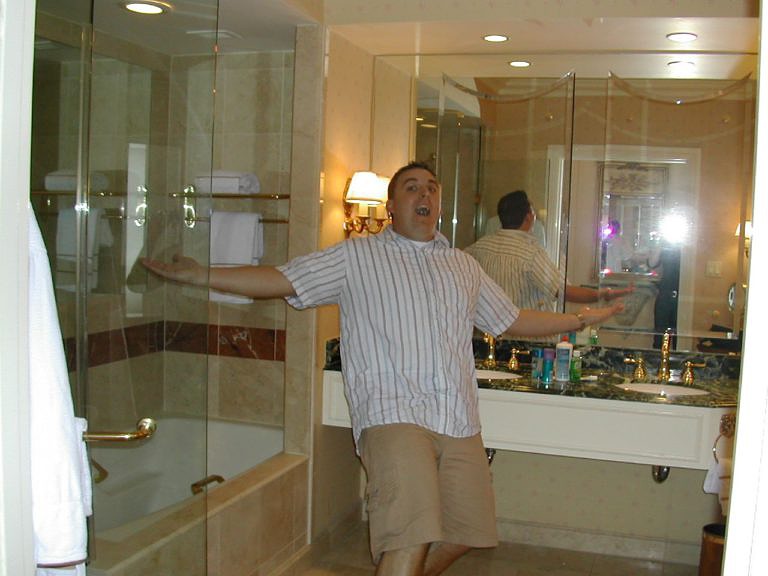 I was up on the 19th floor, and the view was lovely: the mountains, the Wynn, and the pools. 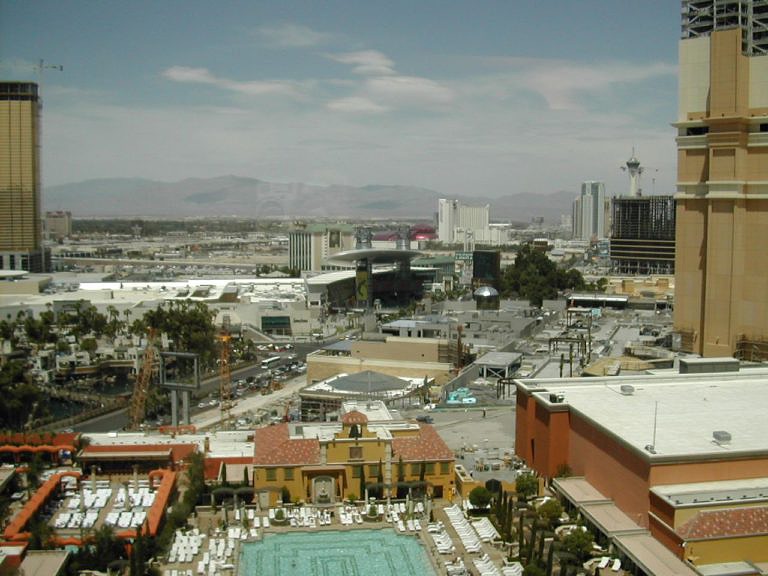 The windows were glazed, and so it actually looked kind of overcast all of the time. It wasn’t until you looked down and saw the dark shadow of the building that you could tell how sunny it was. I managed to sneak a few hours by the pool, which barely made a dent. After two and a half years of Seattle, my body doesn’t remember how to tan. Hopefully it remembers before Hawaii. 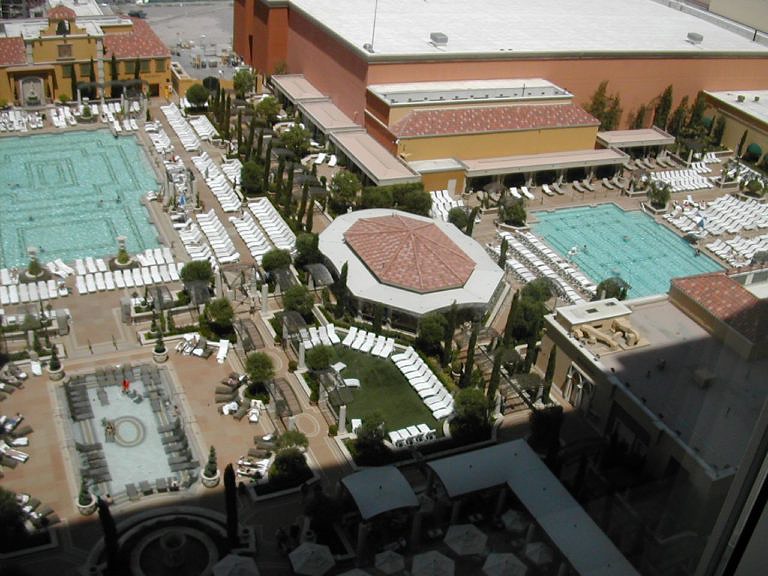 On the whole, I thought it was a very weird, uncomfortable week. The hotel was a maze — they really don’t want you to find your way outside. I thought the casino was disturbing (my first time in one). Given how much air conditioning, and pageantry, and faux-gold finishing, and flowing water, and electricity is used, it’s hard to imagine someone looking around and thinking that they feel lucky. So much money has to be lost for it all to be profitable. Many, many people worked on convincing me to gamble (it’s odd how excited other people get about introducing you to their favourite game), but setting aside money to lose just didn’t seem compelling. The restaurants were delicious, but ridiculously expensive. The gender thing is bizarre. The conference had maybe 5% female attendees (though I suspect I’m being very generous), and most of the women at the hotel ranged from arm candy to the drink and cigarette ladies in their costumes on the casino floor. I felt totally out of my element.

I left at sunset, though, and got some spectacular views of the mountains. (None of the pictures came out — the glass just reflected all of the slot machines next to the gate. I would have included them for artistry’s sake, but they were too blurry. You’ll just have to imagine.)