Woohoo! And, we’re here! They gave us both leis (Me: orchids; Kevin: nuts) when we arrived. Here’s Kevin in his: 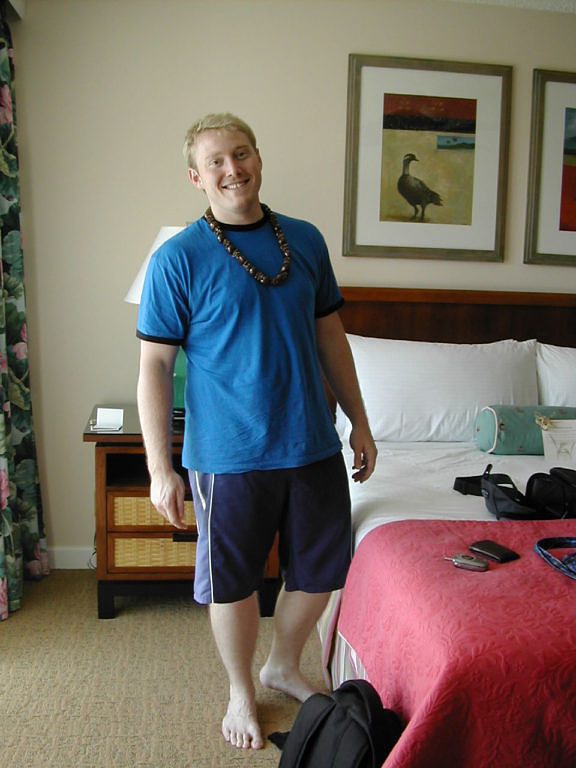 For the first five days of the honeymoon, we stayed at the Fairmont Kea Lani in Wailea on Maui. It was the first resort experience for both of us. Mad fun, despite the price. The sun rises a bit before six, and sets slightly after seven, so we actually kept 7 am – 8 pm hours for most of the trip. This was a major change for me, but it kept seeming like everything we wanted to do happened early in the day. We did yoga overlooking the bay on the first day, and then snorkeled all of the remaining mornings. The fish were amazing. So much bigger than we expect given our aquarium-trade view of things, and watching the fish school was incredible. We saw three days’ worth of green turtles, which was a delight. They are so purposeful and elegant. Several approached us, which verged on the creepy to me — they’re big! I was also deeply amused by their behaviour at the surface. They come up for a few minutes — Kevin’s theory was to re-oxygenate. While they’re up, they hang at the surface, with their heads down and looking around. It reminded me so much of our posture while snorkeling that it was hard to believe that they weren’t imitating/mocking us. 🙂 (“Kick, kick, look, look…. nah! The view’s better down there.”) When they dove down, which many people have compared to flying, they were so stately until they reached a rock or the sand. Those shells and flippers really aren’t so manuverable. But it was interesting to see a *turtle*, of all things, being so expressive. The first one we saw was being hounded by other ignorant/enthusiastic snorkelers (which is a. illegal and b. rude and terrible). He swam to the two of us to surface (we kicked back away — a large thing to be coming right at you!) and then marveled at him as he continued to regard us, then flapped away along the reef. The face was amazing. On the third day, several turtles with many more options, and no antagonism from roudy humans, continued to approach us as they surfaced. Back on the beach, someone said that they’d been watching a turtle approach them, just stayed put, and the turtle came and gave a little head-butt to their mask before finding better things to do… (is anyone else reminded, yet again, of Finding Nemo?)

On our second snorkeling day, we saw three large (25-35 ish) schools of me-sized silver fish. They weren’t sharks, but I was still deeply freaked. Given how closely they schooled, I was afraid that they would be the feeder fish for something truly enormous. Kevin said that their mouths weren’t big enough for harm, but I felt like their fins and mere presence was sinister. Back on shore, assorted guides suggested that they might be jacks (too round), or ava/bonefish (too small). Just from pictures, I’m wondering if they might be tarpon? I’ll continue to investigate…

And since this is a photo-lite post, here’s a picture of me knitting out on a lanai during sunset on the Big Island. Yay, vacation. 🙂 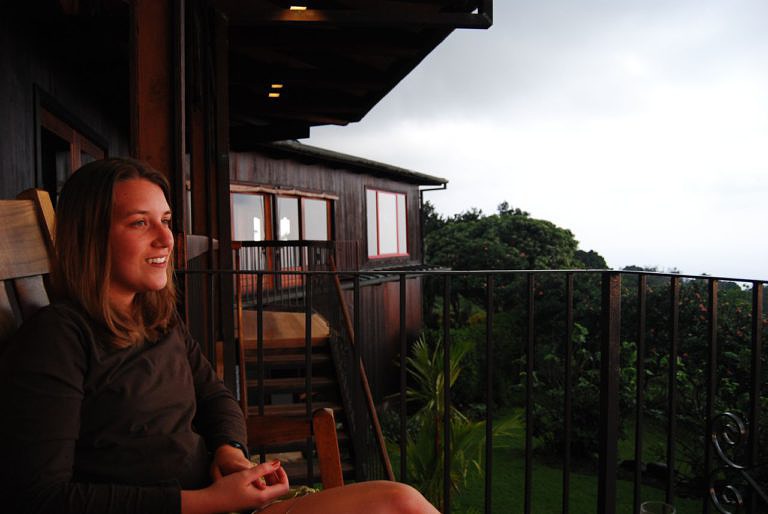 2 thoughts on “Glimmers of Hawaii”