Well, we have a new dude in the tank. We took Kevin’s family to the fish store on their last day here. (To be fair, we merely suggested it as an activity and then they asked – we didn’t drag them.) Along with the typical late December purchases of new lights, more sand, and the hermit crab and snail cleaner crew, we brought home an emerald crab.

The upside to emerald crabs is that some people claim that they eat bubble algae (a constant nuisance, and we have plenty). On the other hand, many people say that they also eat corals, other crabs, and any rock-dwelling fish (like the gramma) that they can corner. I don’t doubt it – those claws are pretty big. But Kevin’s family was here, he loves them, and he promised to trap it and bring it back to the store at the first sign of problems, and so we came home with one.

Once in the tank, he promptly acted like a crab (ie, dissapeared into the rocks and became nocturnal). We’ve seen him a handful of times since. 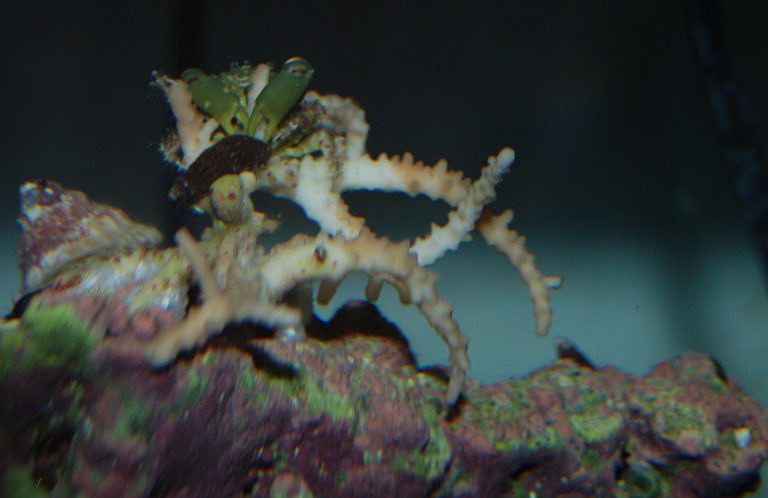 See him? His green forearms and pinchers are hugging the top of the acro. (There’s also a brown shell of a hermit crab on the acro just under the tips of the crab’s claws, and the pointy purple shell of a medium-sized snail to the left.)