Our neighbour, Paul, asked us today if we would mind trimming back the lilac the lilac next to the driveway, since he was having a hard time reaching his gate and mowing. They’re good neighbours, and I appreciated that they waited until after the blooms were done, so I went out about an hour later with the clips and pruned it back and up. The entire thing looks a lot more even now, which is nice, and I think that it will get more sun which should help with the last of the very persistent moss.

Once I was outside, I weeded the front gardens, pruned back a few bushes that had gotten gangly, and then decided to finally just do something about the maple. Two branches later, I can present before and after shots:
View from the street, before: 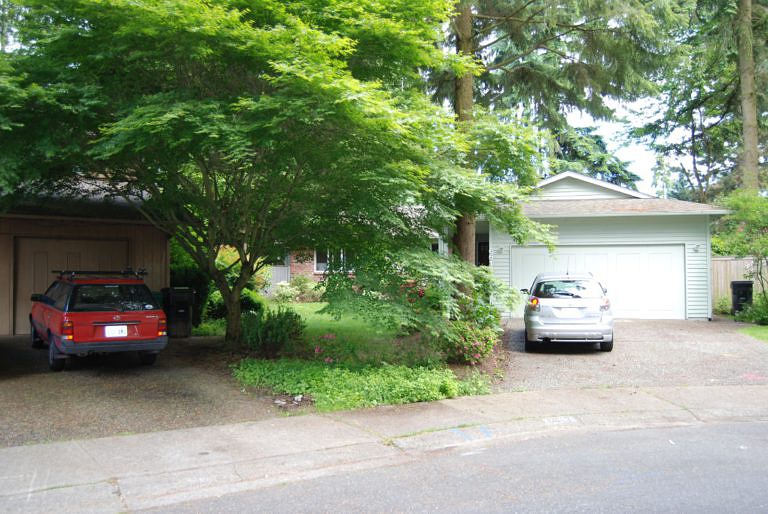 … and view from the street, after: 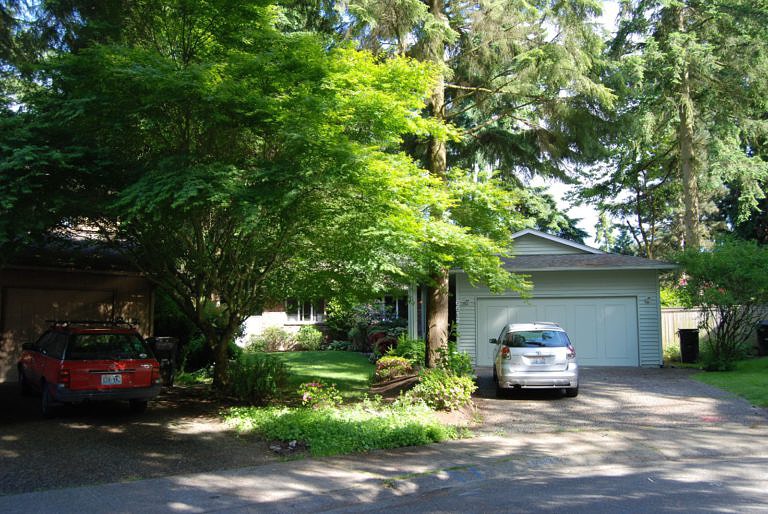 View from the house, before: 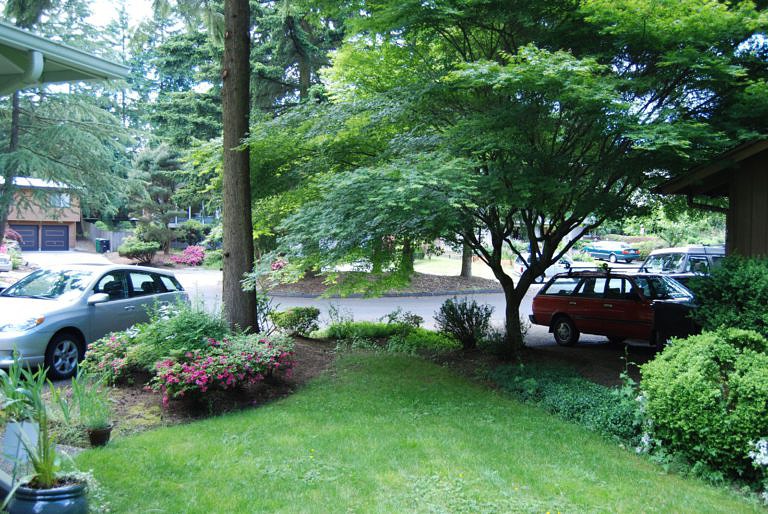 … and view from the house, after: 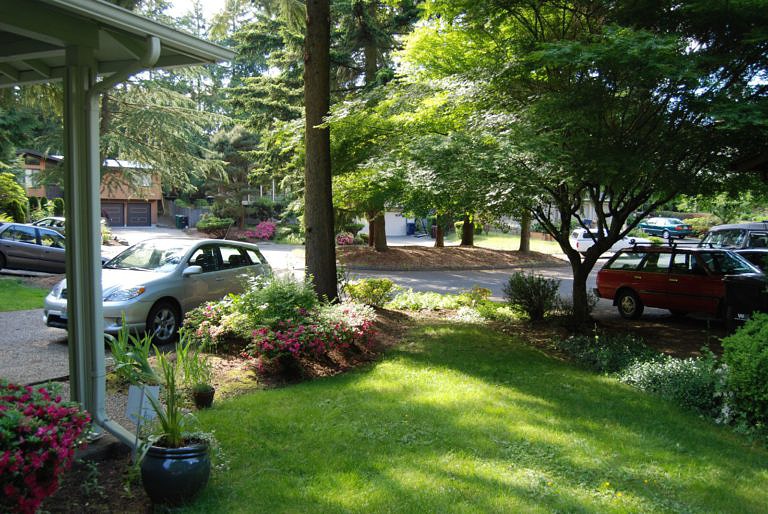 The ground actually gets sunlight now! I think that going up another branch in the middle would entirely be a bad thing, but at least now I can walk under it without stooping, and maybe we can scatter some grass seed and have a chance of it growing. 🙂

By that point I’d filled one yard waste bin and decided to move to the back. I pulled weeds from the rock wall (you wouldn’t believe the number of ivy starts that grow here in a week), pruned the Japanese maple, trimmed the lilac at the side of the house up a bit, and then decided to cut down a tree. We have a pine tree right outside our bedroom window that is just below the maximum size before you need a permit. The poor thing is surrounded by five enormous trees, and tried to compensate by growing as an “L” – it only has one branch, but that was as big as the trunk. 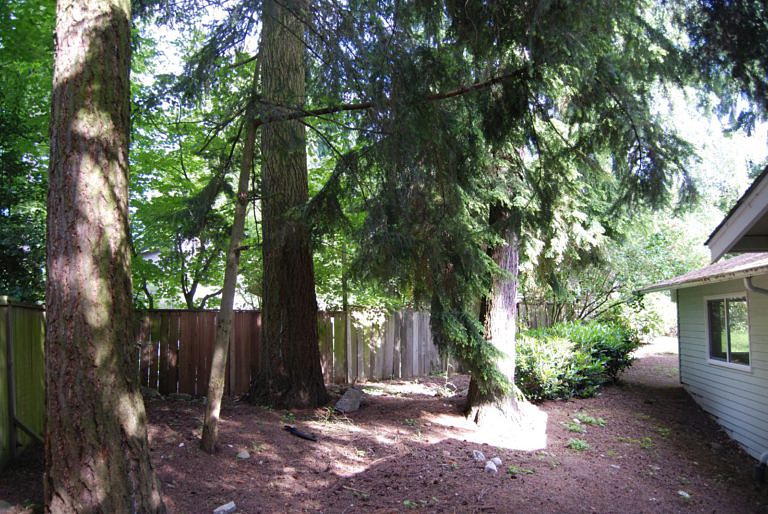 So, I cut it down, snipped and sawed it up, and had just about filled the second yard waste bin when Kevin got home from golf. He did a good job being impressed at all my progress. 🙂 I mentioned that we should probably think about cutting some of the branches on the larger pines at the side of the house – there are a bunch that hang over the roof and side yard, blocking light but not providing any privacy. I’d sort of meant it as a project for another day, but he was enthusiastic starting (and I know better than to stop a project like that when it has momentum!), so he spent another hour cutting down branches – he ended up taking down about 12 big ones from the roof, and then I took down another two from the ground. Even at 8:00 pm, there was an impressive amount of extra light. I can’t wait to see how it looks tomorrow morning from the bedroom.

Here’s Kevin sweeping up pine needles, and our new sky view! (Plus good perspective just how big those trees are – he’s only about 10′ away from that trunk!) 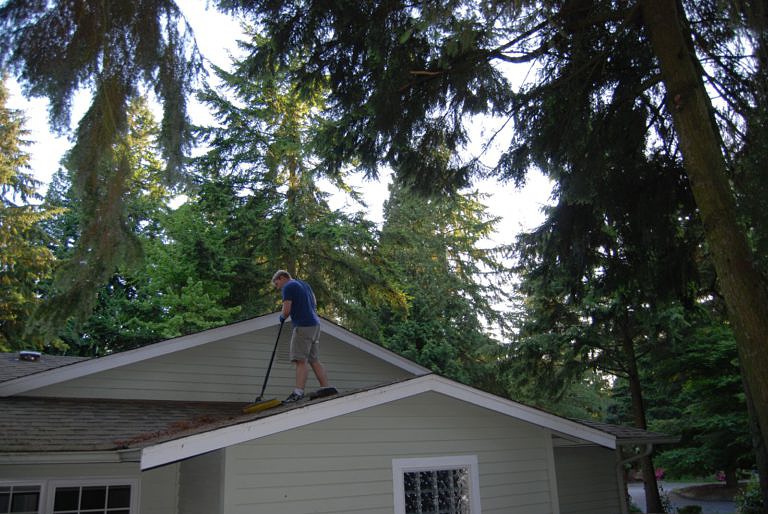 And here’s about a third of the tree carnage. It looked like a major hurricane had hit. 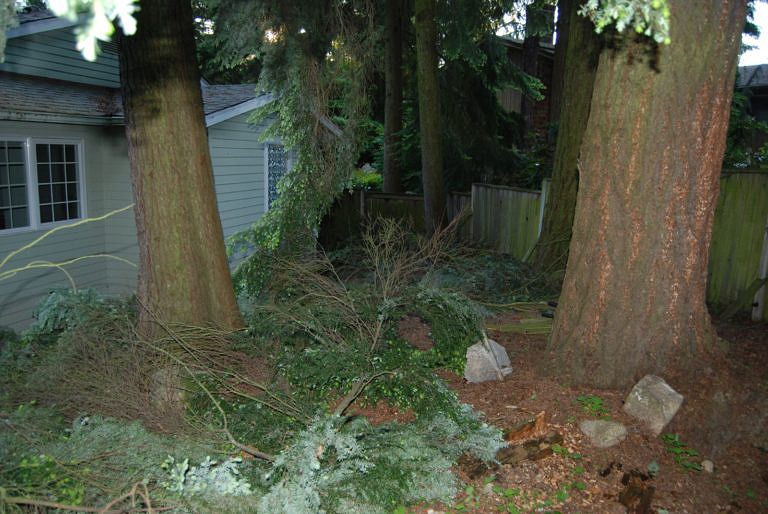 I spent about another hour clipping and sawing the branches into three big piles. There are also branches that fell in the front yard that I didn’t get to before we lost the light. Delicious hamburgers on the grill for dinner, and we are both going to sleep VERY well tonight!

2 thoughts on “The Great Tree Massacre of Aught Eight”