Waking up this morning was amazing – we’d left a window cracked despite the chill (50s) and blowing spray, and so there was bright, light blue surf to listen to and to see. The color is fascinating. Light sand beaches (especially compared to the dark volcanic sand we saw later in the day), accented with medium blue water that had pine green shadows and turquoise crests. I could have watched it all day.

We went to the Beach Dog Café for breakfast. Delicious and wonderful. We realized when we walked in that they only accepted cash, so I had the unique experience of going to a bar at 10 am (to use the ATM). The regulars were amused.

Then, back down 101. We made a habit of pulling out whenever the whim struck for views. Here’s Seal Rock, which amazingly lived up to its name with actual seals! 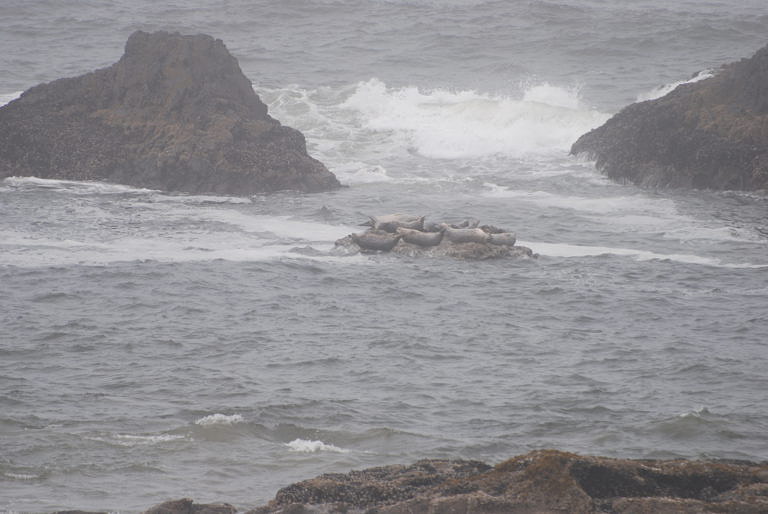 Here’s Kevin overlooking Devil’s Churn (a weak spot in the shoreline rock that has been worn away by the sea and now puts on quite the show with each wave): 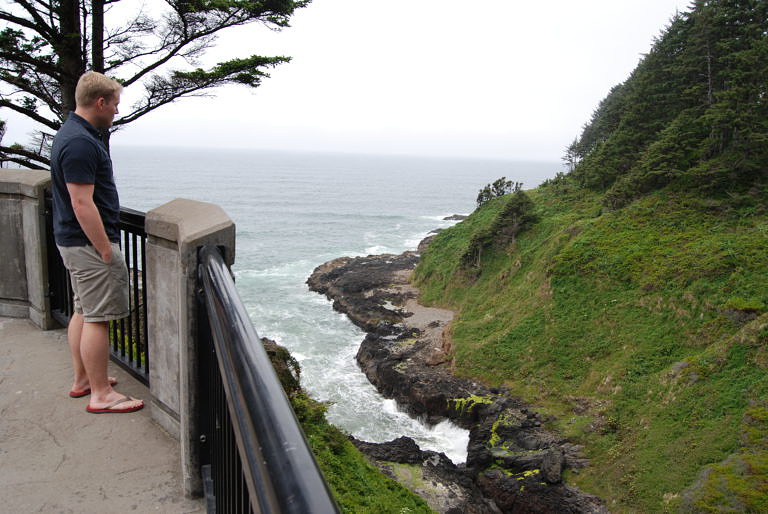 The drive was amazing – lots of fog over the ocean, and when we reached a break in the trees, you’d just see it gusting over the road. Pictures didn’t come out (probably because the speed the fog blew at was as amazing as its thickness), but it was an impressive sight.

We also continued to enjoy the great bridges along 101 in Oregon. Each of them had a different pair of concrete markers at the ends – interesting variation. And there were pretty metal bridges along the route as well. I loved the arches in this one. 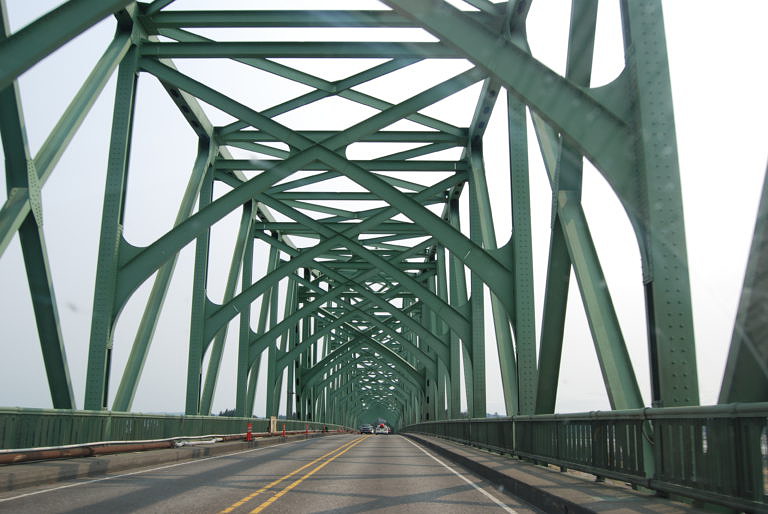 We stopped at Haceta Lighthouse to get out and walk around. It’s an amazing place in a lot of ways – the view, the fact that for the first few decades it was a 5-7 hour trip away from supplies/news/civilization over mountains and beaches (can you imagine?), the number of times per day the kerosene wick needed to be tended to or the glass cleaned, the fact that they figured out a way to amplify light to a point that only the curvature of the earth limited it… more details here. All amazing, though given the fog Kevin and I were a bit skeptical about the curvature of the earth claim. For example, the hills across the way were only occasionally discernable… 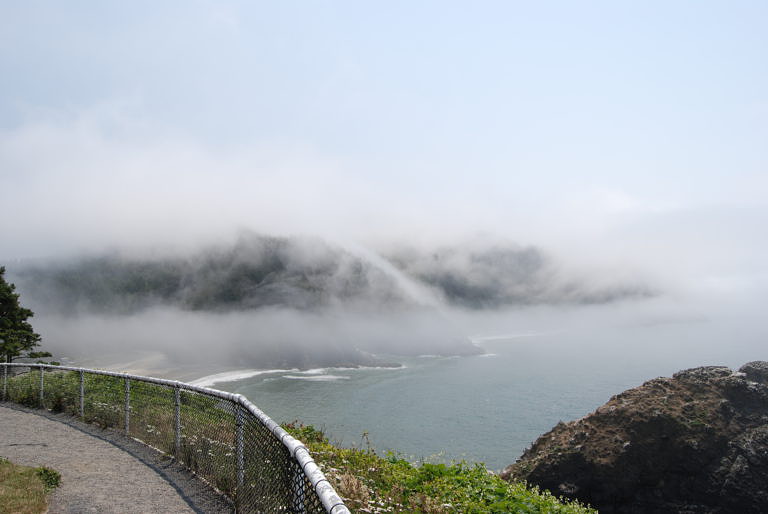 The lightkeepers’ house was exceptionally lovely. (And you can see one of the 101 bridges in the background.) 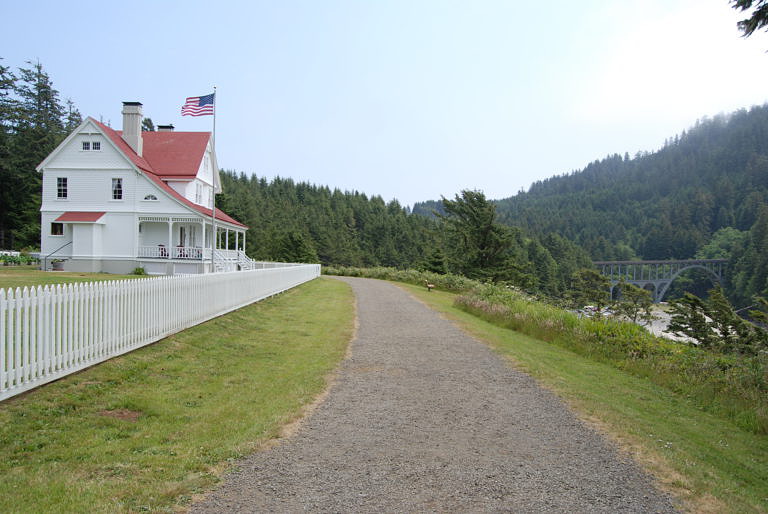 But again, how isolated! There were the prettiest stained glass panes in the front doors – I wonder if that would have been a consolation, arriving as a lighthouse keepers wife, out so far away, for so long? I grew up with so many books that lauded “our pioneer ancestors”, but this was impressive proof of the stuff people were made of…

A view of the lighthouse from further down the shore: 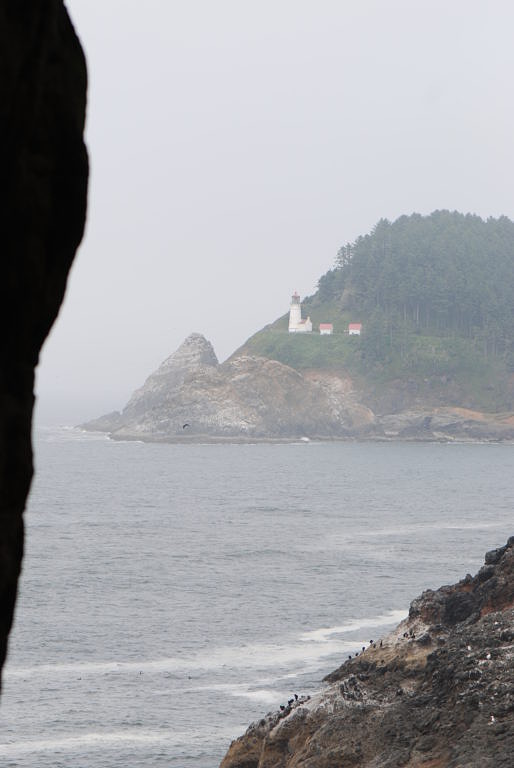 Less than a mile down the road, we stopped at the Sea Lion Caves. A *treat*. The cave is a natural part of the shoreline, where there are all sorts of sea lions lounging about and arguing over space on the rocks. In the ’50s, people carved an elevator shaft in the rock to bring you down to cave level, so that you could see the sea lions in their habitat. Very fun. The bulls, especially, were quite loud, and the cave made their roars echo. 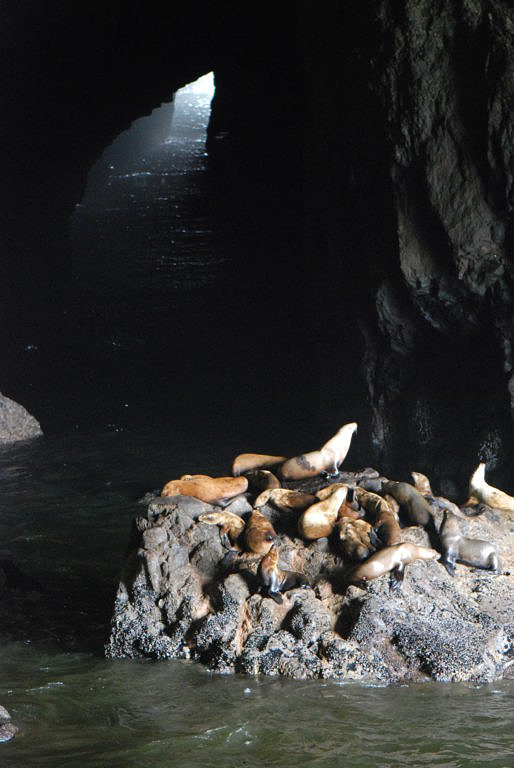 Outside the caves, there were harems of sea lions – apparently it’s mating season and the bulls spend all of their time jockeying for turf with other males, and rounding up the females to keep them in the group. 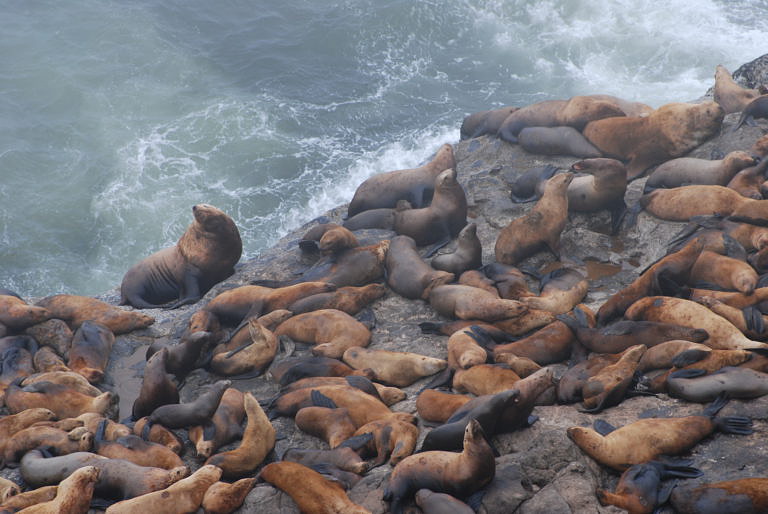 Me, overlooking the ocean and the awesome sea lions. 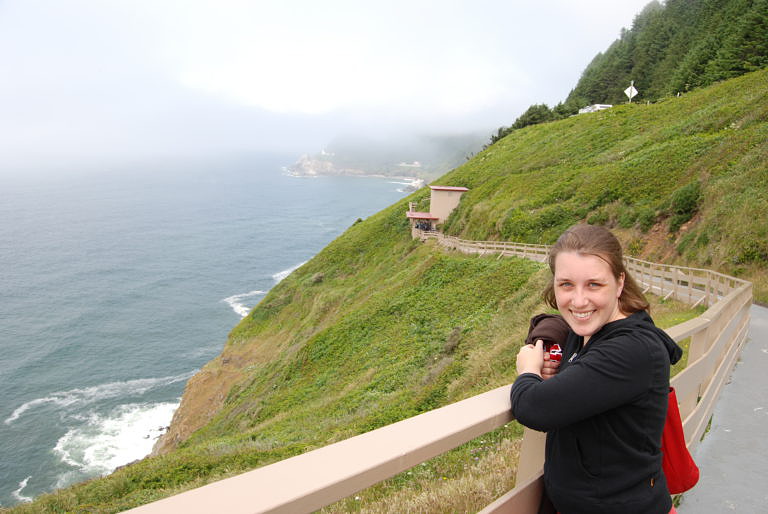 The foliage continues to be interesting. We’ve been seeing these all along the way in Oregon – my guess is that they’re foxgloves? 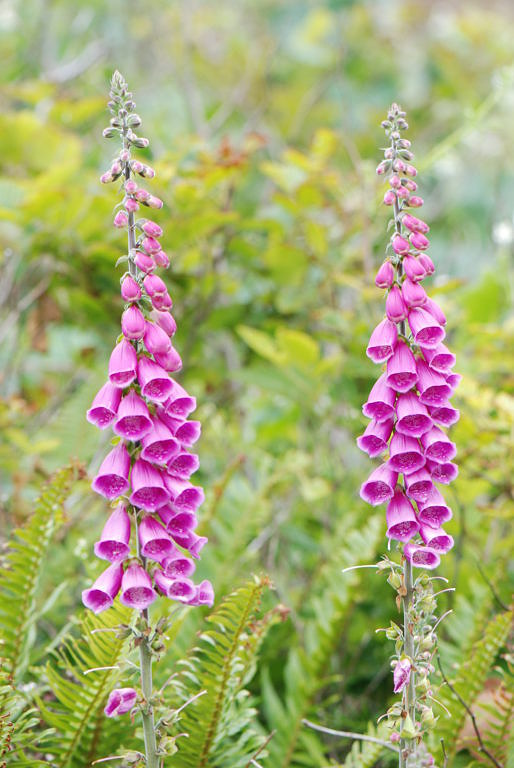 Kevin was impressed once we got to the dunes, because we kept seeing a light green/dark green/golden combination of roadside plants that he thought must be the basis for one of the colleges’ football uniforms, and before he’d just thought the color was bizarre.

After those stops, we made as straight a line as possible for our stop for the night, the Tu Tu Tun Lodge. It was a few miles inland along the Rogue River. Lovely, tranquil, and shrouded in mist. There were deer in the apple orchards, appetizers when we arrived, and wood ready to be lit in the fireplace in our room when we arrived. Luxury. We got in just before seven, and decided to take a tour down the river in the kayaks.
We’d brought our own lifejackets, chose paddles and headed for the shore. Kevin (living up to his reputation) managed, after much deliberation, to choose the only kayak on the beach with a hole in it. As he paddled upriver, I kept getting more annoyed with his insistence that he was getting *lower* in the water. Kevin kept getting wetter, and I kept thinking unhelpful thoughts like, “kayaks ARE low in the water, by definition.” Luckily we were close to shore when he decided his boat was truly sinking. We landed on a gravel beach, spent five or so minutes draining all of the water out, and he half dragged, half paddled it back to exchange it for a new version. I’d noticed, meantime, that my boat was plugged with a wine cork, and so decided to trade in for another model, too. 🙂 After that, we paddled up river and saw three families of wood ducks & ducklings, and one enormous splash. (Not sure what caused it, but it completely spooked me, as it was only feet away from my boat. Maybe a monster fish??). Kevin went to investigate, and got startled by a second splash, but also wasn’t sure what caused it. Intriguing. Once we paddled back, we felt like we’d earned an evening in front of the fire, reading the paper and supping on sandwiches from the deli down the street. Relaxing and happy. 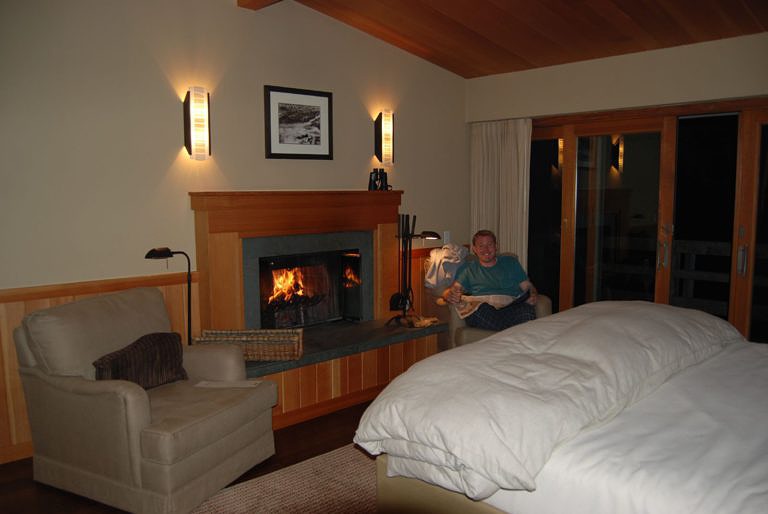 PS. I finally figured out how to link directly to big versions of the photos — if you click on the photos, it will take you to a big version instead of the flickr photo page! 🙂