Day three was another long driving day, as we had to drive from southeast Oregon down to Napa. We got off to a relaxed start. Our room at the Tu Tu Tun Lodge had a soaking tub on the balcony overlooking the river and they gave us a packet of herbs to put in the water, so we had a soak before breakfast. We drank our coffee (they’d brought us a tray when we woke up) and watched the river and the mist. It was cold (50s) and foggy, so the hot water followed by a thick robe felt great. 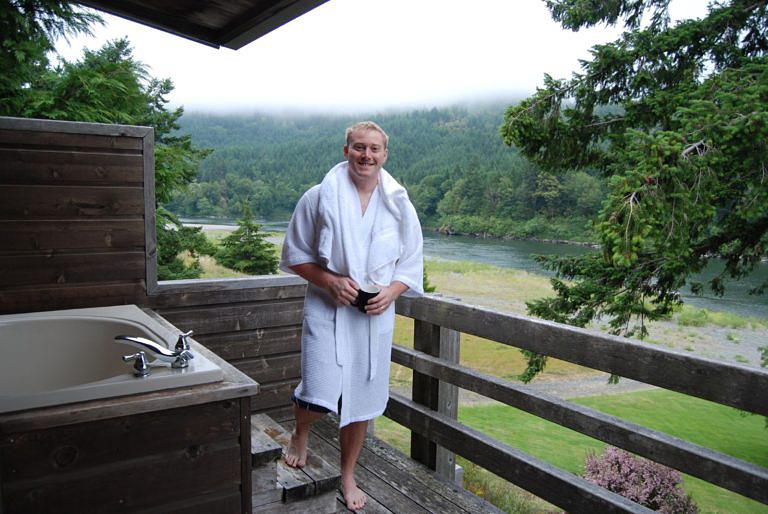 We headed down for breakfast a little after nine, and had a great time talking to the people at our table. One of the couples were retirees from New York who’d been working their way up the coast. They were full of ideas for places to stop and after breakfast loaded us up with maps and travel brochures (several of which were actually very helpful). Another was a pair in their thirties from San Francisco – the retirees thought they must be honeymooners, but Kevin and I thought dating and on the rocks? She seemed exhausted, though, so maybe it was just early in the day. Breakfast was delicious, and we dawdled over it.

We ended up checking out at 11 – a bit later than expected. We wound our way back down the Rogue River to the coast, and found that the fog was even more intense at the shore than it had been on the river. 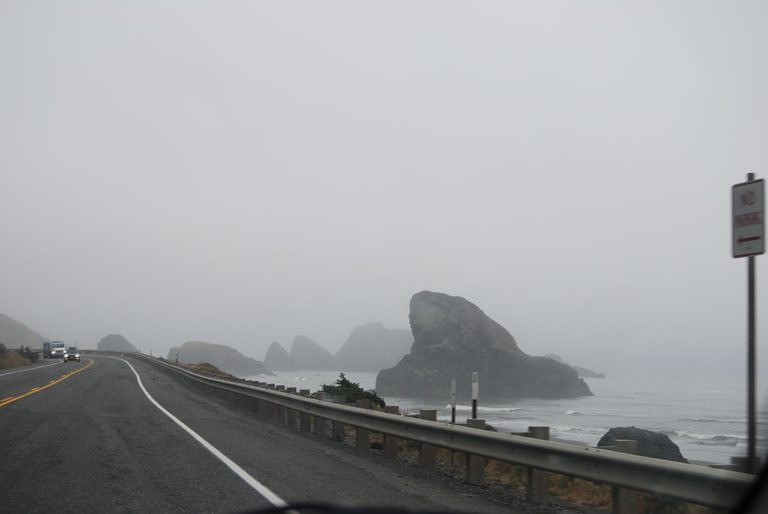 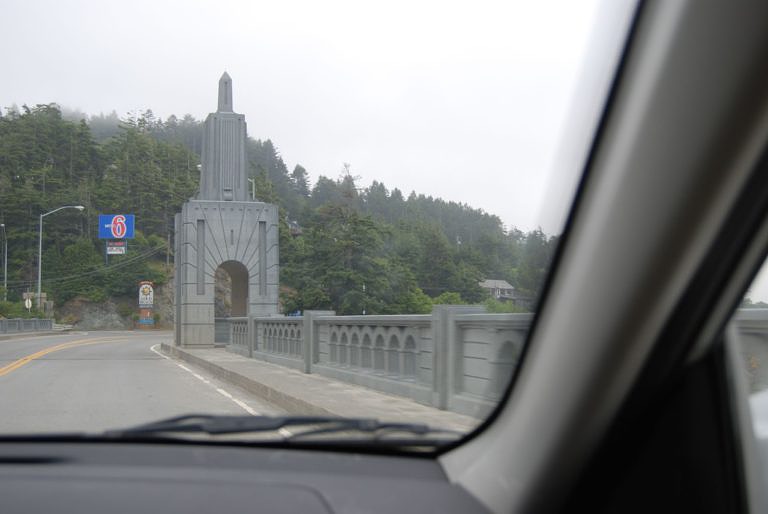 And then entered into California! The fog there was, if anything, even thicker, and as we entered Redwood National Park visibility got even more limited. There were people running carrying carved sticks with fringe tops all along the highway – some sort of treacherous religious ceremony? 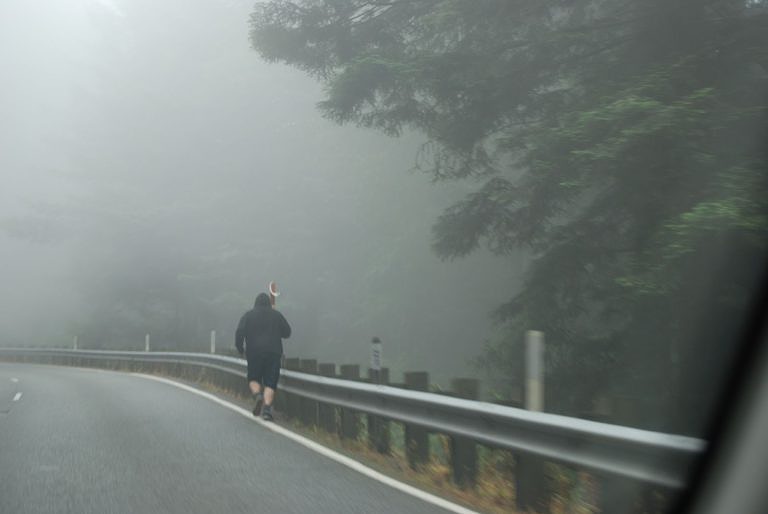 The road was a curvy little two lane thing, up and down huge hills and overlooking steep cliffs down to the ocean, then swinging inland past enormous trees. With the fog, we could sometimes only see about 10-15 feet ahead, and the combination of car-sized tree trunks suddenly appearing, and then drop-offs into grey nothing was extremely disconcerting to me.

101 finally swung inland and the fog cleared. Kevin had been driving, and I didn’t realize how anxious the lack of visibility was making me until we were finally free of it.

We’d heard of several places that were likely to have elk and enthusiastically kept our eyes peeled, to no avail. Yet another herd of not-elk: 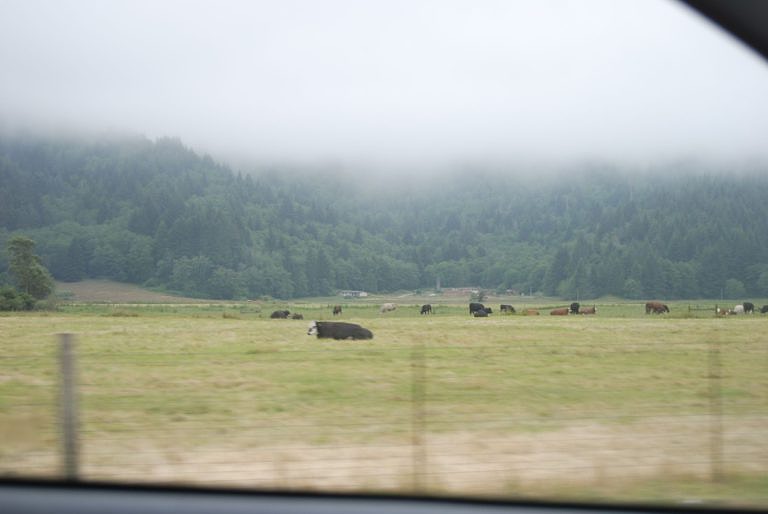 We didn’t stop to get out and walk until we reached the Humbolt Redwoods State Park (quite a ways down from the national park). We drove along the Avenue of the Giants (about 30 miles of amazing, huge trees), and got out to walk around about halfway down. The bark on the trees was amazing – so grooved and thick. Here’s Kevin with a very big tree: 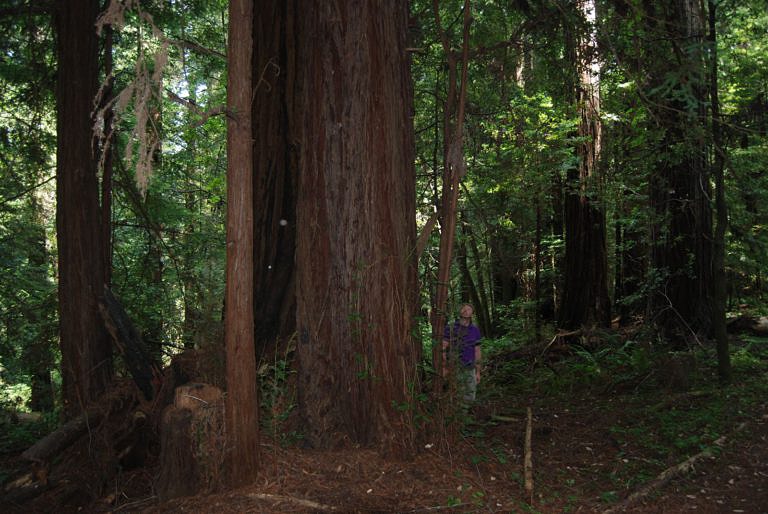 The view looking up: 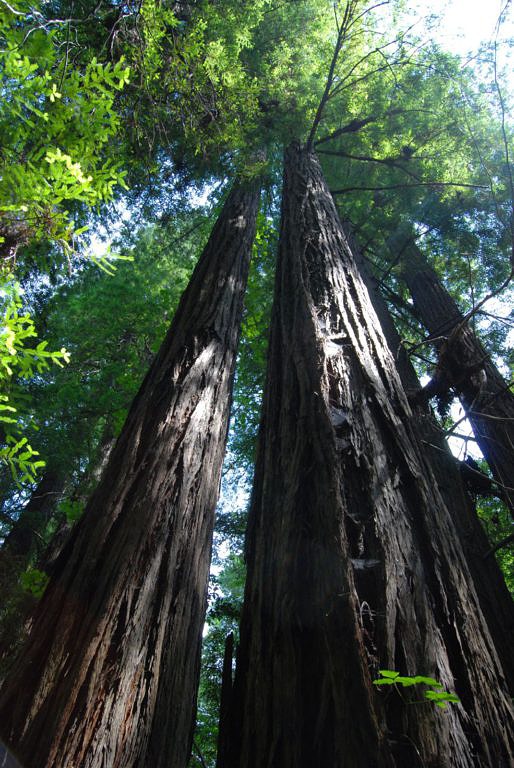 Me in the middle of a stand of huge redwoods: 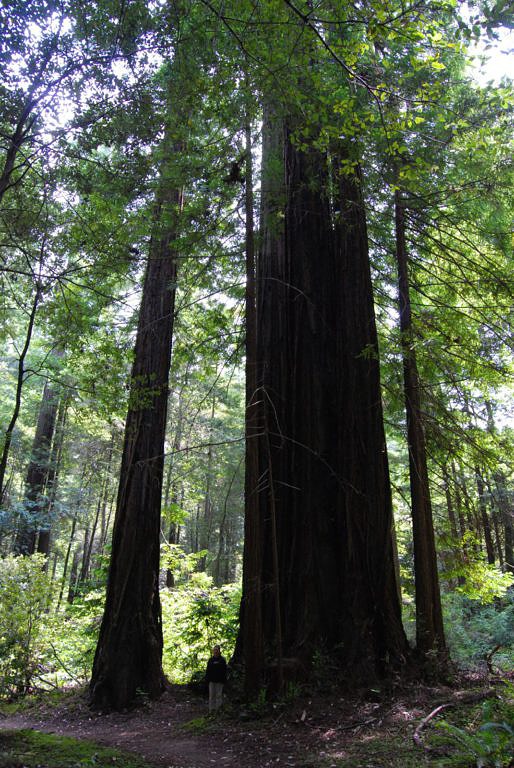 And another looking up view: 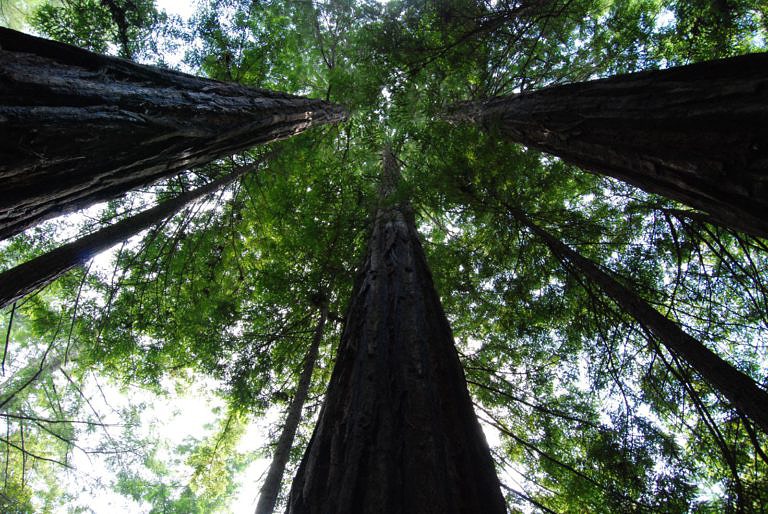 We continued to drive south through the park… (We wondered how they keep the trees from overtaking the road? The difference in width between a 125-year tree and a 200 year tree is enormous, and the park is old, and cars have gotten wider. Do you think they cut trees down when they get too wide?), and then, once we were back on 101, continued through forest fire country to Geyserville. The forest fire driving was something else. Our fog from before was replaced with thick, acrid haze. My previous experience with forest fires was driving through Idaho, Montana, and Wyoming last summer. So, I’d been thinking that as long as the roads weren’t closed and I brought extra contacts, there would be minimal effect on our drive except for crazy sunsets. Not so, it turns out. The smoke and the smell were everywhere, and when we stopped for lunch in Willits there were firefighters explaining the current action plan (including which areas/buildings they didn’t plan to save, from a resources standpoint) and talking to angry and unhappy residents. We didn’t see any flames or burning from the road, but we drove through the hills of the Mendocino complex (fires set by lightning storms a few days before we arrived). Not fun.

At Geyserville, we left 101 (farewell!) for 128, and started to enter real wine country. We transitioned from curvy roads along bleached-grass mountains studded with pine trees… 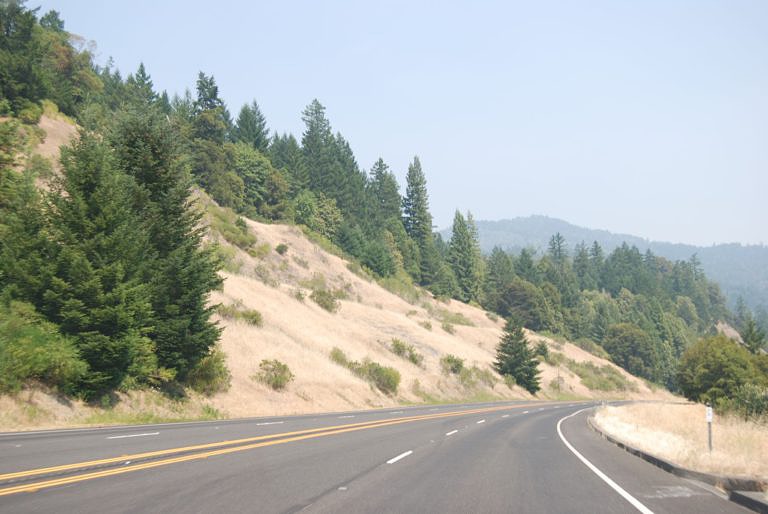 To fields of grape vines, surrounded by mountains: 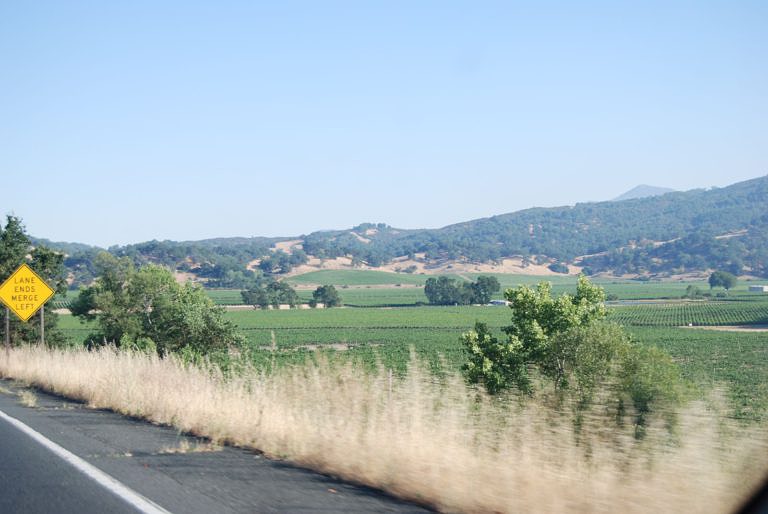 And pastures with trees and ponds: 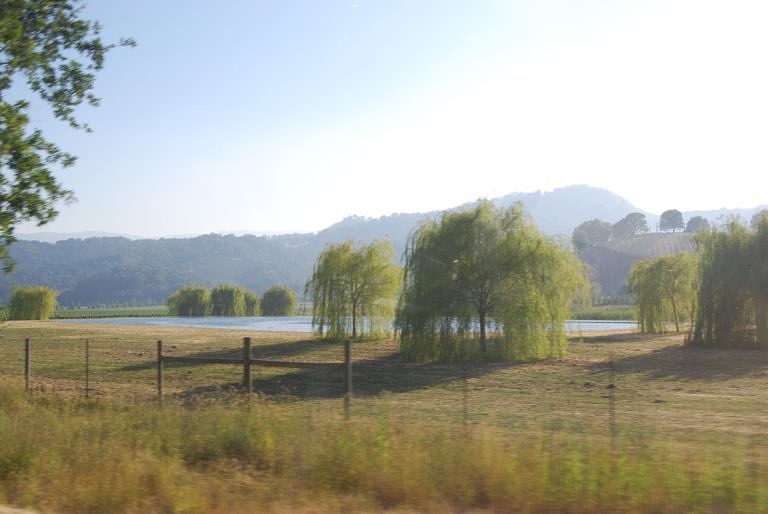 None of our photos really came out, but the rows of vines are neat, curling up around hills and making them look well-coifed. We got to Sonoma around 7:00, and then Napa Valley, so were too late for any tastings, but we had lots of fun passing judgment on the names of the wineries we passed and once we were in Napa, on the architecture and accessories of the tasting rooms and buildings. It was a pretty engrossing game, since you get a new winery at least every quarter mile. (We were amused, later at our hotel, to see how accurate our name-judging was as an indicator of wine quality – according to our hotel room’s Napa guidebook we were on the money. 🙂 Nice.)

We stayed in Napa (the town). We arrived at 8:18 – just enough time to check in, throw on new clothes, and walk to our 8:30 dinner reservation at Celadon. Dinner was amazing. We had great cocktails while we were decompressing from the drive and deciding on our orders, and then had a bottle of the Honig Sauvignon Blanc (yummy, pretty label). I had an endive salad with pears, walnuts and blue cheese; Kevin discovered heirloom tomatoes and fresh mozzarella. Yum. Duck for Kevin, pasta for me, a split sorbet – happiness all around, and a great nearly-three-hour dinner with fun conversation and an attractive setting to end the day.