Checkout at McMenamins was at 11, but Kevin went to the corner bakery to pick up treats and coffee for breakfast, and then we enjoyed the tubs, and took turns reading sections of the impressively local paper (favourite story: the full page on the guys who set up with beach chairs and coolers of beer in their driveways to watch the forest fires, after agitating for brush clearing for a few years…). And we ended up suddenly realizing we were five minutes late for checkout and hustling away – luckily, they didn’t seem fazed.

We decided to have lunch there, since it was a short driving day and we’d both wavered between options on the menu the night before. My onion soup and Kevin’s rueben were yummy, and it was fun people watching since the Bed Fourth of July Pet Parade had just broken up. Lots of red, white and blue costumes on pets, kids and adults. And as we drove out of town, there were several classic cars in show condition on the road, so that was a treat, too.

I’d just called my parents to wish them a happy anniversary when we came around a corner and saw this out the driver side window. Woah! 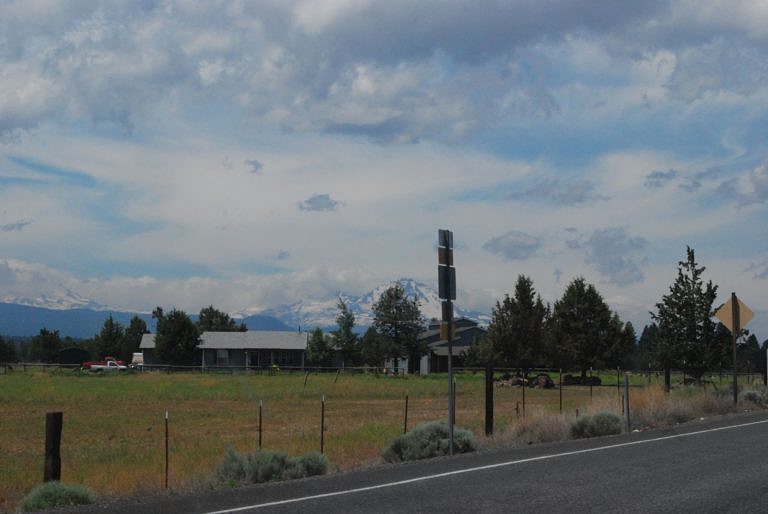 Sorry, Mom and Dad, for getting completely distracted mid-call. It turns out they were the Three Sisters – three huge cojoined volcanic peaks (Kevin turned out at a scenic pullout with a sign that explained the view – thank you, Oregon). If you click through to the bigger photo, you can see all of the big, blue, mounded hills in the foreground. 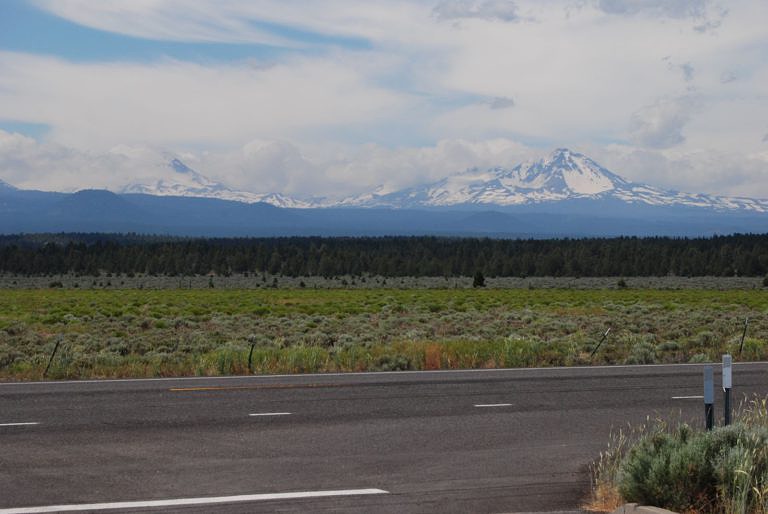 Pretty spectacular. The clouds (and what turned out to be the last blue sky of the trip) were pretty sensational too: 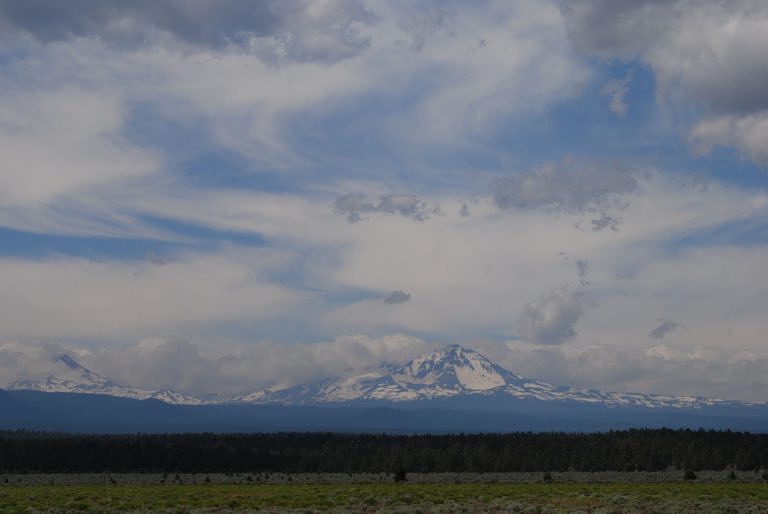 The road took us across the Cascades, along a tiny brook that grew larger by the mile. More elk signs (but still, no elk: sigh). The landscape grew increasingly distressed, and we’d finally figured out that what we were seeing must have been an enormous forest fire when we came across yet another scenic/educational pullout. 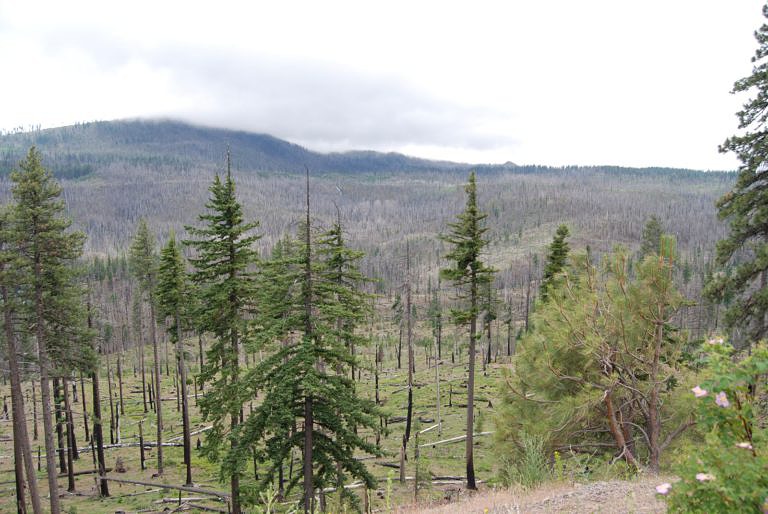 Apparently, this is a corner of the B&B complex – a forest fire set by lightnight in 2003. The hills and hills of dead black trees were sobering, and put a lot our last few days of driving in perspective.The pullout was interesting, as it explained how better husbandry could prevent fires. Certainly not new news, but I was impressed that state funds had been dedicated to education.

We took Rt 22, which followed the north fork of the Santiam River, which continued to be pretty. We switched drivers in Marion Forks so that Kevin could call his family before it got too late in the afternoon Eastern Time. The river continued to get bigger until all of a sudden the road went by the Detroit Lake and Detroit Dam – sort of amazing in a flyby way – the more I thought about it and the depp dropoff down the road, the more impressive it seemed.

Kevin fell asleep just before we picked up 15 south of Salem. For the most part the passenger time on this trip was attentive and active – we spent more time talking to our families on the phone on the off shifts than we did sleeping. I wouldn’t say that he missed much in this stretch though. It rained a little, and there was just general sprawl along the highways (lots of big box stores and billboards). You couldn’t see the mountains, so I was mostly just making haste for Portland.

Last time we were in Portland we got seriously lost, but I blamed us for inattentiveness. This time I just blame the city. Portland pretends to be a nice, grid-based western city, but in reality it’s a mess of one way streets, bridges, misleading highway exits, and you-can’t-get-there-from here. A little Boston wannabe. We missed our I-5 exit heading north, got off the highway to turn around, missed it again going south, and then got on a different highway and finally managed to find the hotel via surface streets. Stressful! 🙂 Crazy Portland. Our hotel had mandatory valet and they were amused to see all of our roadtrip baggage (cooler, lifejackets, sleeping bags, yoga mats, etc). Apparently we weren’t the first car they’d seen en route. We managed to leave the camera in the hotel room which was a pity because Portland was awesome and now we have no visual proof. We walked over to an Andean Tapas place in the Pearl district for dinner. Wow. They had really unusual and yummy drinks (though we recognized some ingredients like tamarind from the Sengalese restaurant in San Francisco), I had oysters for the first time (interesting, but not a new favourite), and we had a great selection of small plates. I can’t remember all of them, but here are ones I remember from the online menu:

After dinner, we went down to the riverfront to watch the fireworks. I haven’t see a major city display in several years (the Seattle fireworks we’ve watched have been from across the lake), and Portland’s was spectacular. Happy Fourth!