We got off to a slow start – tired after all of the fun of seeing friends for the last two days!

Far from anything approaching a city, we couldn’t help but notice all of the heavy advertising on the highway for the Olive Pit in Corning, so we stopped there on the way out of town for bagels, lattes, and to be impressed at the variety of ways that you can use olives.

The road north was *rural*. We were back in log truck country: 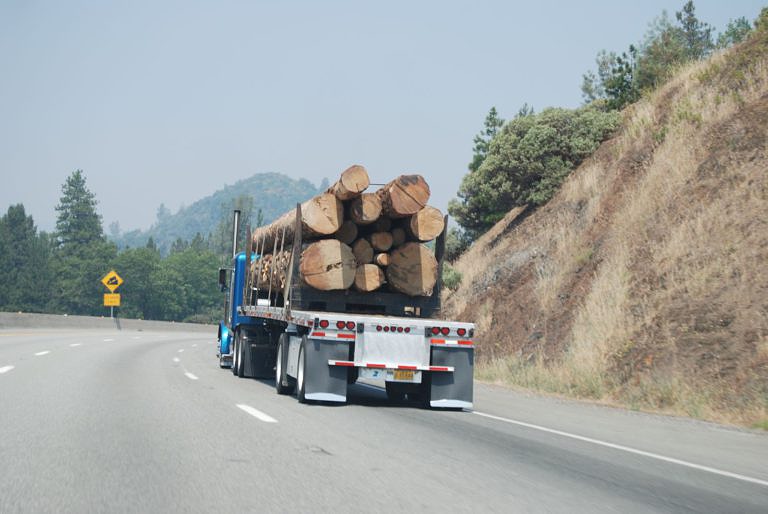 … and forest fire country, so a lot of the pictures didn’t turn out. Lake Shasta was gorgeous, and it looked like all of the party boats and house boats were having a great vacation. After Redding, we were pleased to be seeing Cascades again (before that, the mountains to the east were the tail of the Sierra Nevadas). These mystery rocks to the west were amazing: 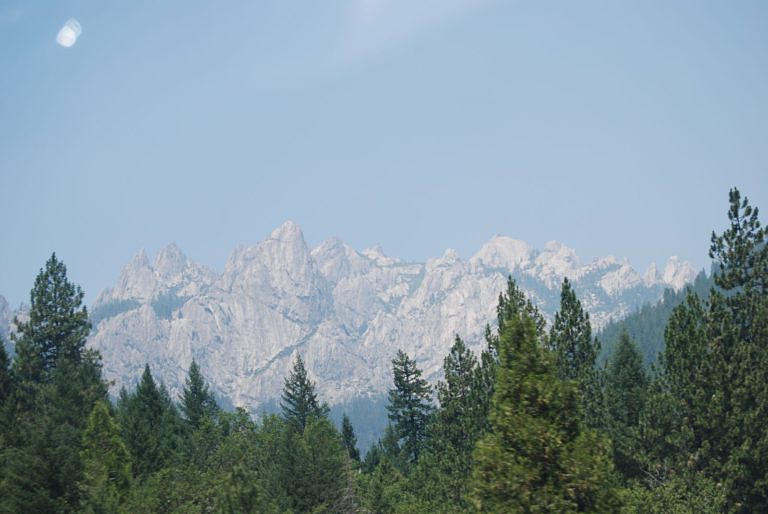 Mount Shasta is one of the huge volcanic peaks on the west coast, yet we could barely even see it due to forest fire haze. (And note trucks for scale!) 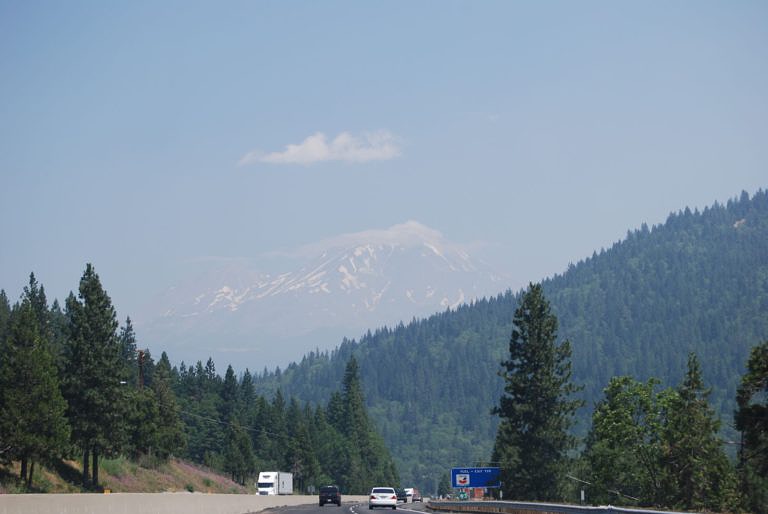 The road has views of it from the south, west and north, so we had a long time to contemplate the glaciers and how very volcanic the mountain seemed. This little volcanic nubbin (3917 ft, Black Butte Summit) was clearly related. 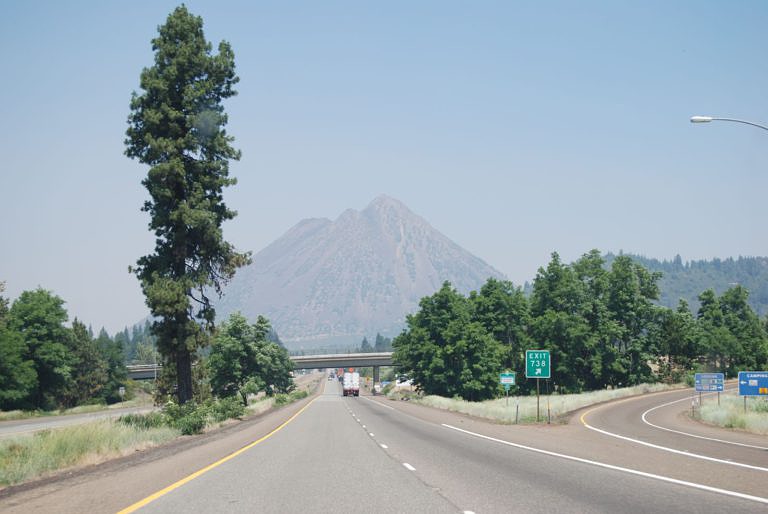 Once we crossed into Oregon (and got to use our neat new laminated map! An awesome gas-stop purchase!), we paused for take-out pizza in Klamath Falls. The town was pretty and lots of interesting storefronts; we could have spent much more time there. So: pizza, gas (I have to say I’m not a fan of the mandatory non-self serve), windshield and windows cleaned by me, change of drivers… and on past Klamath Lake 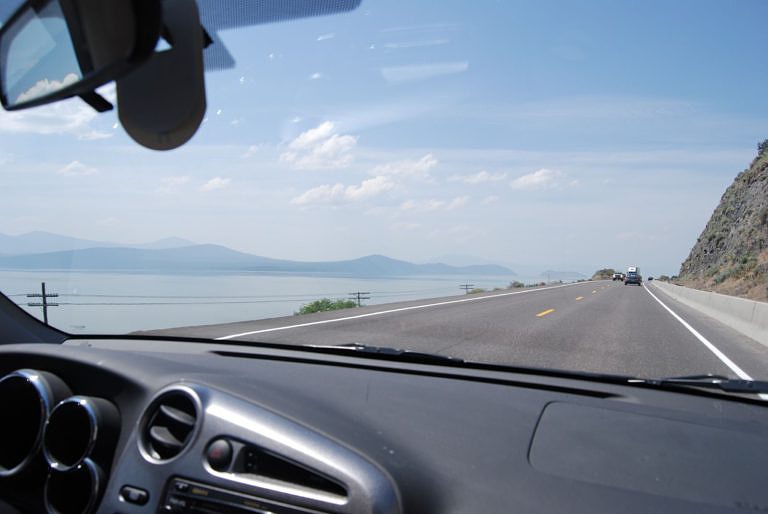 I have to say that I’d been fairly vague and middling in my expectations of Crater Lake. I was expecting pretty mountain ranges, an unusual and pretty headless and water-filled volcano, tons of tourists (in the main season, there are all sorts of boat rentals and things apparently get all full of tour buses and activity), and nature despoiled for the sake of tourism. I was wrong every step of the way and loved the experience of being there.

We’d been taking 97N and split off onto 62N to get to the park. It still looked like a reasonable sized road on the map, but turned out to be a meandering, wide lovely two-laned thing that curved through farm country, with 360° mountain views. 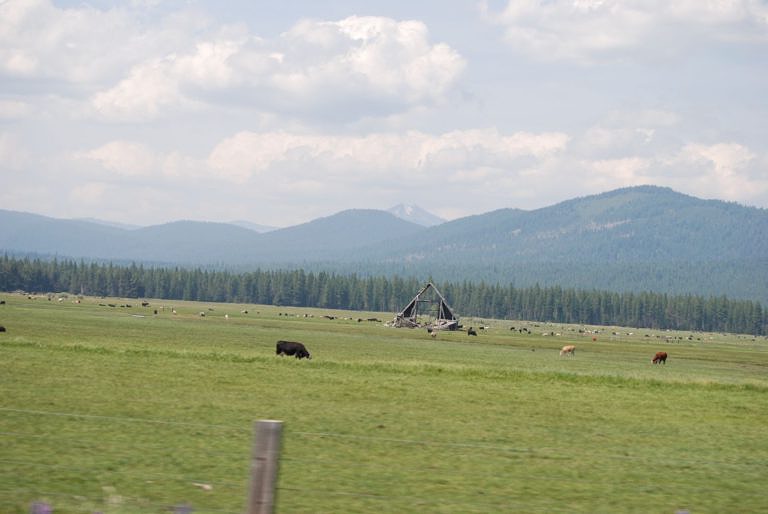 There were pulloffs all the way along with educational signs about which mountains we were seeing and how the geology had changed over the last few millennia. I’d thought this before, but after reentering the state on the way home I had an even higher level of appreciation of what a great state Oregon is to drive through – gorgeous (ocean, mountains, lakes, wildflowers , and interesting weather), great signage, the roads are taken care of, they make a point of including passing lanes, and the pullouts are constant and well-marked. I love Oregon.

We had to stop along route 62 to get out and just smell the air. Wildflowers and hay and heavenly. (And aren’t the clouds neat?) 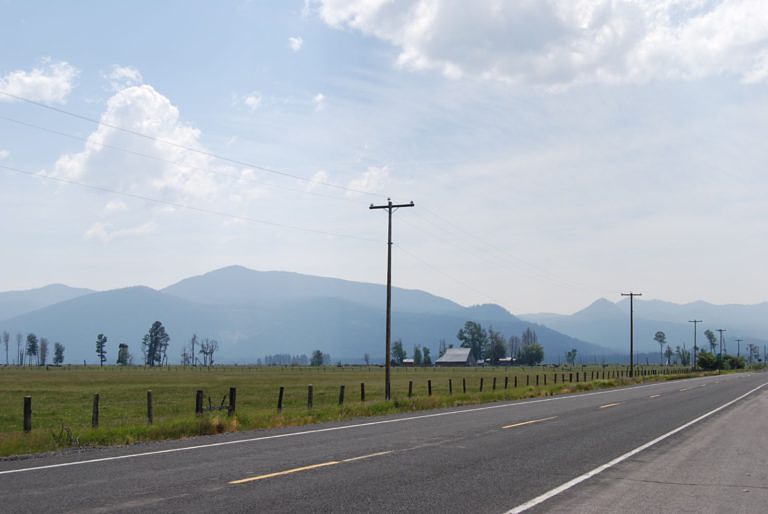 The road curved into the park, and we tuned to the National Parks radio frequency to find out that the majority of the park (including the east rim drive and almost all of the hiking trails) were still closed for the season due to snow. Craziness! As we climbed out of the farms (along blessedly straight roads – mountain curves aren’t usually my thing), the road curved along a deep river chasm – too deep to see the river even when you looked over the edge, but the canyon walls were sculpted and impressive. More signs for elk, but we didn’t see any.

We stopped for a moment in the visitors’ center to look at maps and orient ourselves, then drove to the rim. Wow. Here was one of the first views down to the lake after we got out of the car: 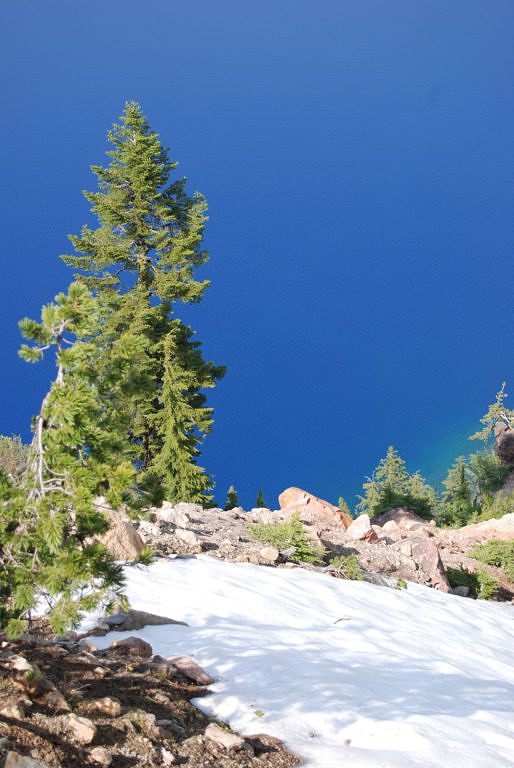 That’s looking down an almost-straight snow slope, and the blue you see is the lake, not the sky. Wow.

We found a spot on a rock-wall-lined outlook to admire the lake and eat some of the CSA cherries we still had in the cooler. Something of a trend this trip – locate gorgeousness, eat fruit. 🙂 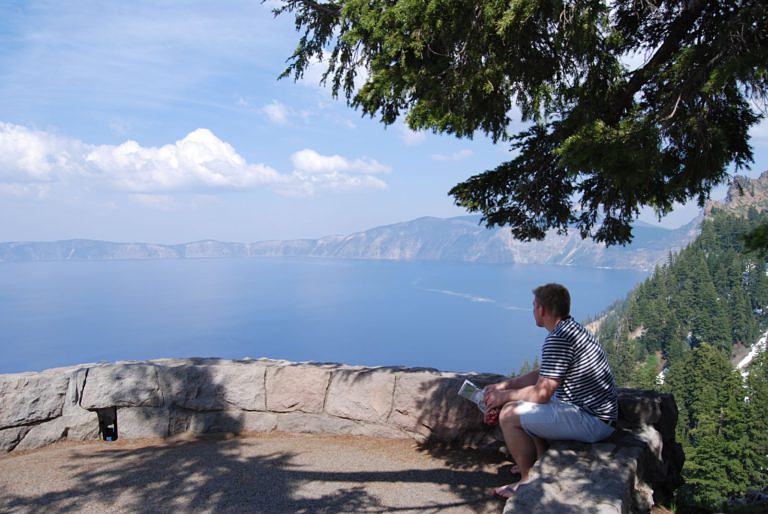 And here’s the shot of the view across the crater. Neat. 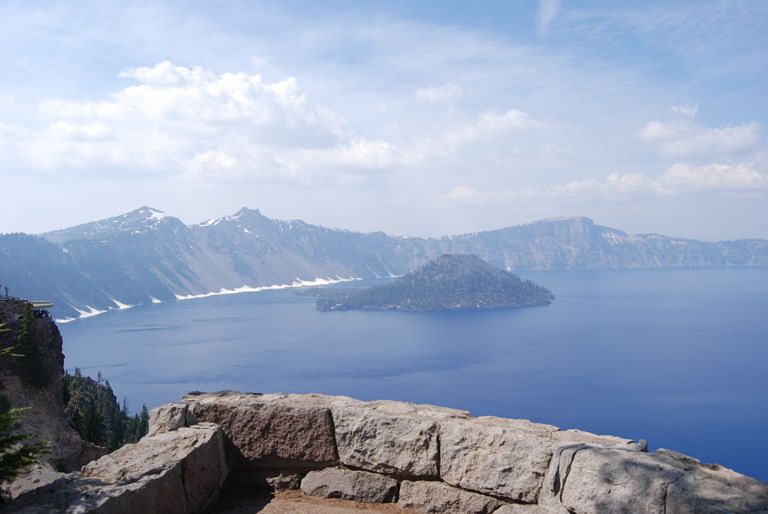 We enjoyed watching the wildlife. A fun chipmunk, and then this is a Clark’s Nutcracker – it’s about twice the size of a robin, and we saw dozens of them. 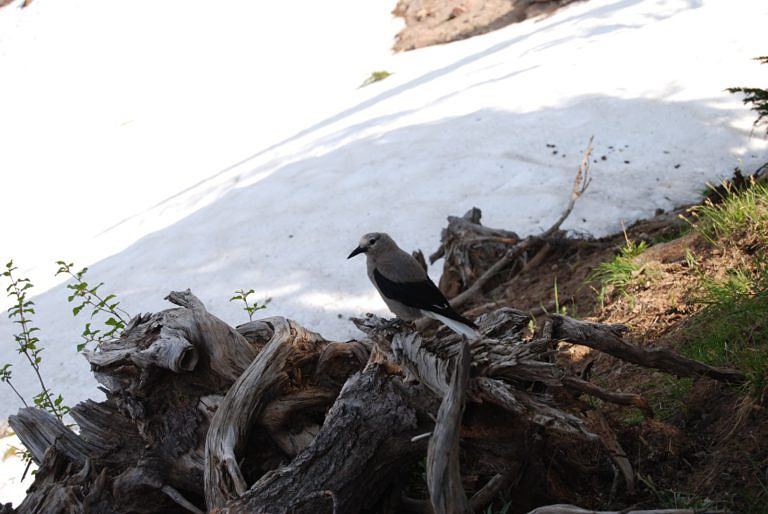 On the drive out of the north entrance of the park, we admired the snow banks: 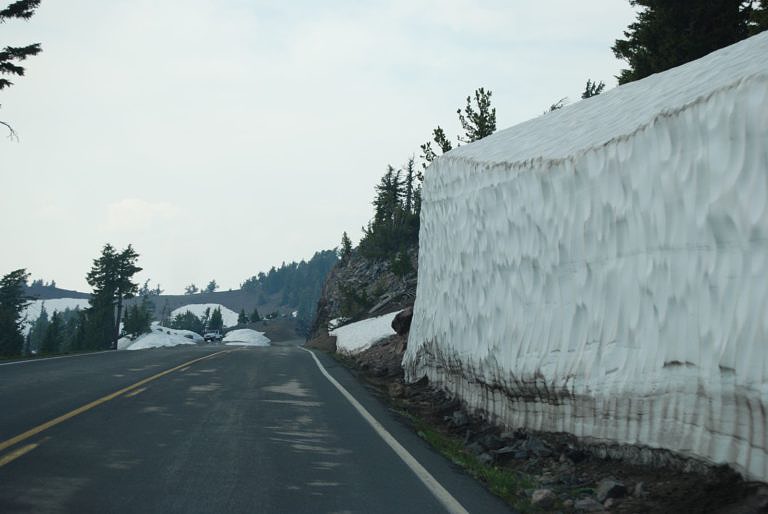 The fields of snow on either side of the car looked like they’d been scooped away by yard-long oblong chisels. The result is that they looked groomed, like snow versions of vineyards. I have to assume that the wind does this? 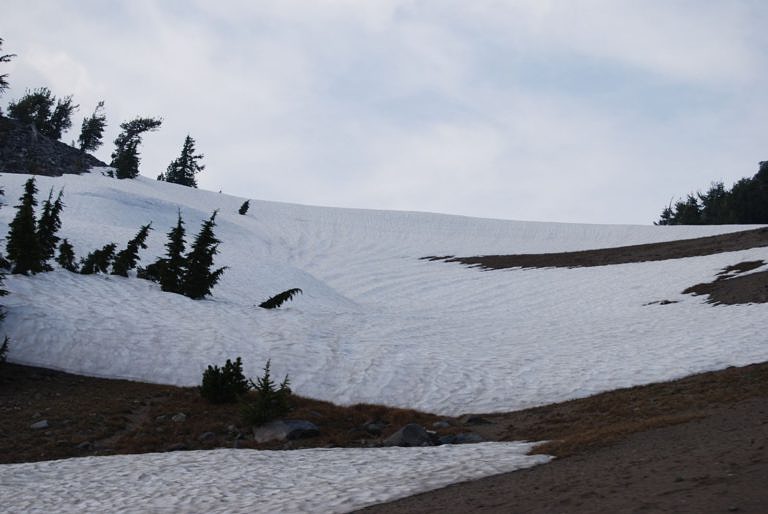 Forest fires made most of the view a haze, but we could see this volcanic specimen as we descended. 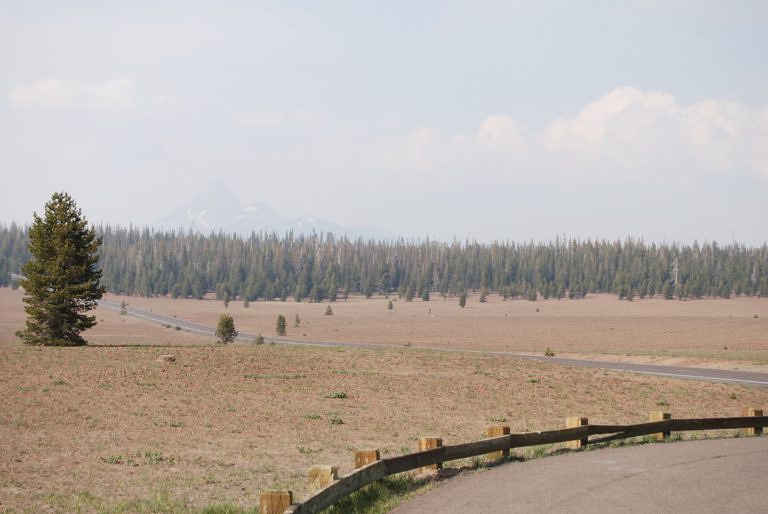 We thought it was Mount Hood when we took the photo but on further reflection and a study of the map decided it was probably Jefferson.

We arrived in Bend, OR in the late afternoon. We stayed at the McNenamin’s Old St. Francis School – a catholic school converted into a 19-room hotel, restaurant and brewery. The place was very neat, and lived up to its billing for quirkiness. We stayed in a room called “Alter boys” – here I am reading in the room reading news stories and captioned photos on the wall from its former life: 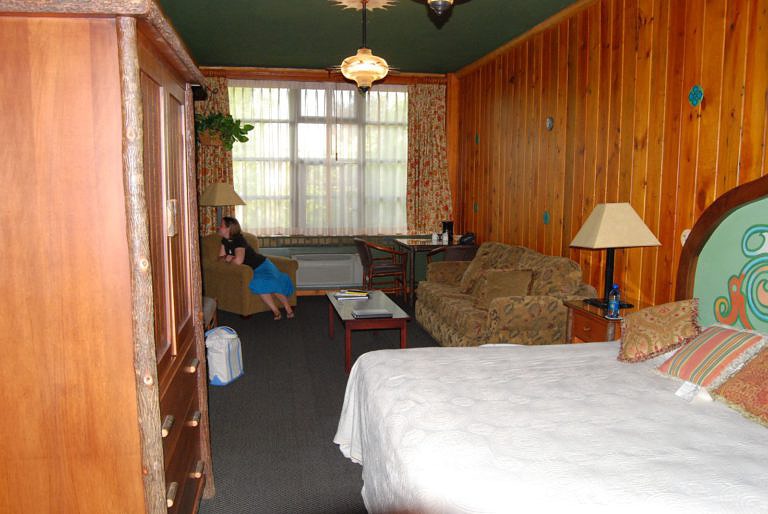 The bathroom was something else – side-by-side claw foot tubs, two showers, a sink, and a toilet stall with no door, plus quotes from the former students painted all over the walls. 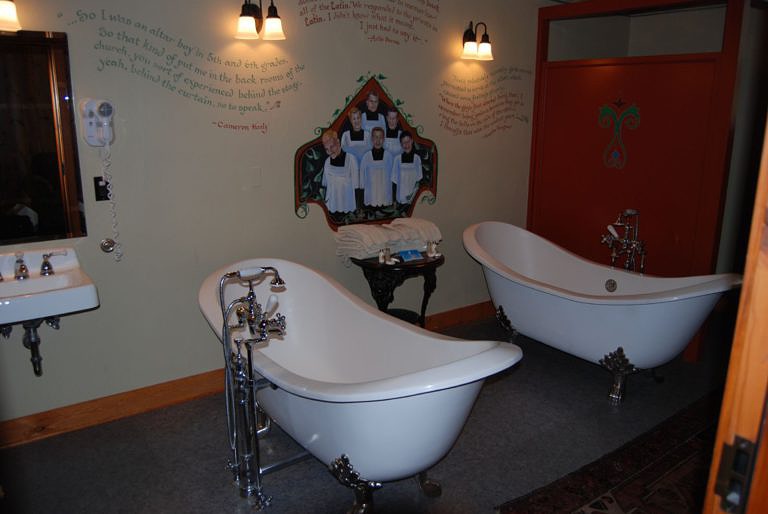 We went out to find a better parking spot, then came back for dinner and beer – both were delicious. We had free admission to the movie theater but the 8:00 show didn’t appeal so we played pool instead. I’m incredibly rusty, but we had a good time anyway. A neat place to stay the night after a very full day!