Kevin went skiing at Crystal yesterday, and I decided to take the day for fun errands. There are two thrift stores in Redmond that I keep meaning to peek into, so that started the day (I was more interested in getting the lay of the land than actually buying anything). Then I headed up to Woodinville to visit Molbaks. I’ve been meaning to go since we moved here four and a half years ago, and this was my first trip. I get the local paper’s weekly gardening email, and they’d mentioned that vegetable seeds were in, so a trip seemed in order. The store itself is amazing (read: enormous, comprehensive, and fairly overwhelming). There were aisles of seed packets, which I spent a good 45 minutes browsing through. I ended up with these guys: 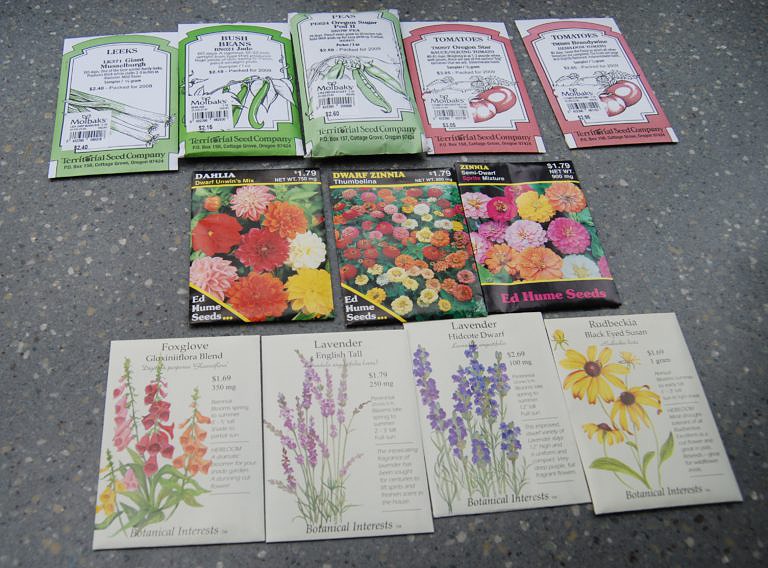 The veggies from Territorial Seed Co were the main reason I went. I just didn’t get in gear last year on the vegetable gardening (two late tomato plants notwithstanding), and I’m all excited about the beans and peas this year, not to mention heirloom tomatoes. The leeks are an experiment, but I’m optimistic. I’m not sure where I’m going to plant the veggies yet. The over-the-top plan would be to build a raised bed or two on the side of our house by the bedroom window. We have all sorts of space and sun there now that the trees are down. And with an actual bed, we’d be able to grow lots of peas and beans, instead of just a token plant or two. Downsides include all of the effort of building the raised bed and figuring out drip systems and other irrigation (there isn’t a good source of water on that side of the house, so rather than a million trips with a watering can, I think I’d have to figure out some sort of system with a rain barrel that I fill every week or two. The cop-out alternative would be buying more containers and just gardening on the patio again, but then we’re basically limited to one container/plant of each kind. I have a few months to decide. Opinions?

The rest of the seeds are more straightforward. 🙂 The dahlias and zinnias are for the beds around the house (front and back) and for the rockwork. I had a few of each that I bought piecemeal and planted mid-July last year, and this will hopefully be a *much* cheaper expansion of that – they thrived and the color was spectacular. The Black-eyed Susans and lavender are for the now-empty space outside our bedroom window. I’m trying not to get my hopes up too much, but both of those are such great summer flowers. We’re both all excited about the Foxglove – we loved seeing these on our Oregon road trip last summer, and they’re supposed to prefer shade (which we have plenty of!). They don’t flower until the second year, I’ll just get them established this year.

After Molbaks, I drove around the top of the lake to Seattle – interesting driving. Quick clothes shopping at University Place, delicious lunch and a croissant at the bakery/sandwich place, and then I went to Acorn Street Shop to use a gift certificate from my brother and sister that I’ve been hoarding. 🙂 I had two small projects in mind, and found perfect yarn for each of them (a pretty green shade of Provence cotton, and some gorgeous blue variegated cotton that’s wonderfully soft and lovely colors. 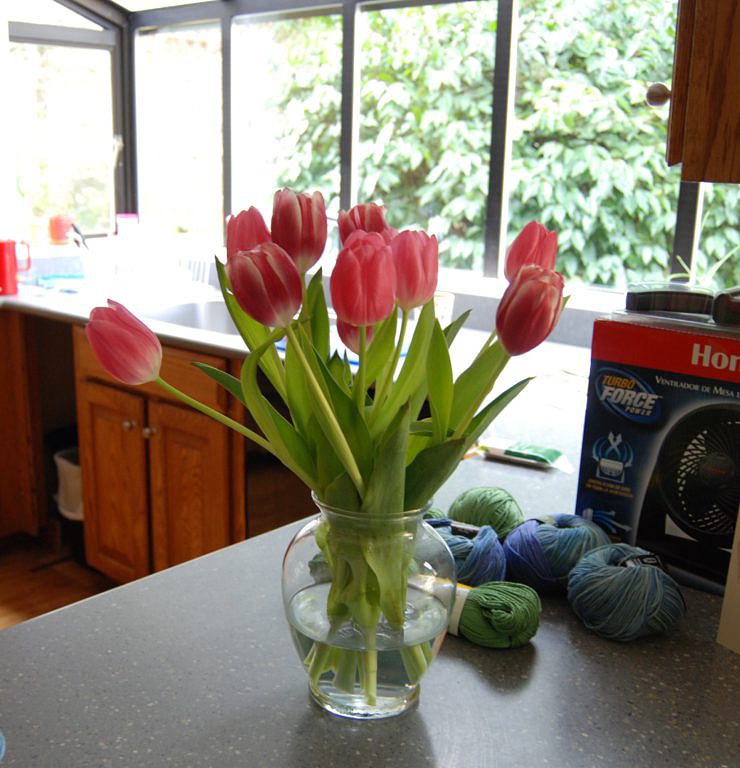 On the way home, I knocked some less-interesting things off the list: cashed checks, bought a power strip at the hardware store, and stopped for groceries. That last errand was a treat, because the tulips are finally back! Bunches were 2/$7, so I picked out a medium and dark pink in honour of Valentine’s Day. I am so glad that we’re back to tulip season – it makes February and March so much more enjoyable out here.