I’m starting to feel like if I don’t speak up soon on the blog, the plethora of baby knitting projects will soon give it away: I’m pregnant. 🙂 I’m just shy of four months, and due mid-August. January was a long month (while Kevin was busy renovating rooms and keeping the fish going, I ate cheerios and snoozed on the couch, waking up just long enough to take a photo of whatever he was up to), but I seem to be improving on the energy front and the knitting has commenced in earnest. 🙂 We won’t know gender for another month or so, but I have several patterns that would work quite well either way, so those are at the top of the list in the meantime.

I finished the kimono baby sweater last week, but I haven’t blocked it yet. I thought to test the yarn for color-fastness only after I’d made quite a bit of progress, so of course the darker one bleeds. Oops. Not ideal for a striped sweater. I’ve been soaking it in cold water and vinegar baths which seems to be helping. I’m going to try it in hot water tomorrow, so fingers crossed. I’ll get photos as soon as it’s blocked.

In the meantime, I’ve started knitting Kate Gilberts’ Pea Pod sweater, shown here with the tulips in the morning sunshine: 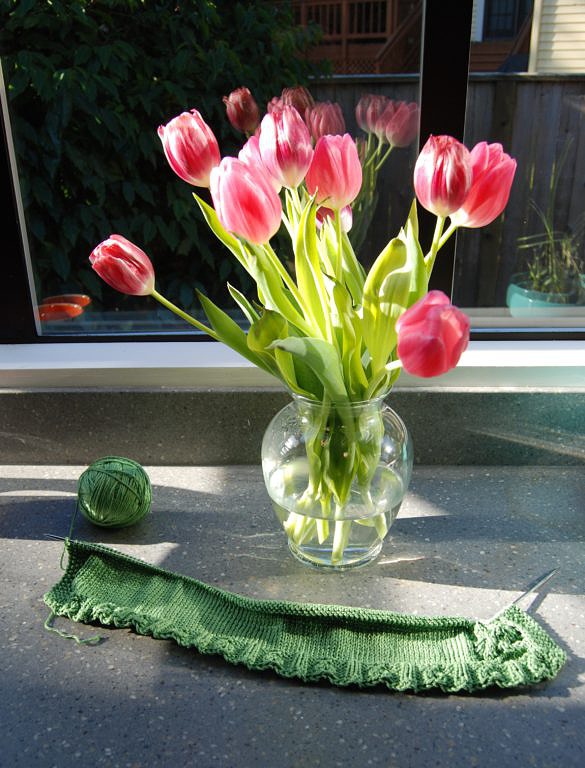 I love the yarn (Provence – a really nice DK cotton). The body is knit in one piece, starting with a leaf rib, and then it switches to mostly stockinette with a lace panel. It feels like I keep only making it through a row or two at a time, but the progress is starting to feel noticeable. Here’s a closeup of about 6″ of the leaf ribbing. 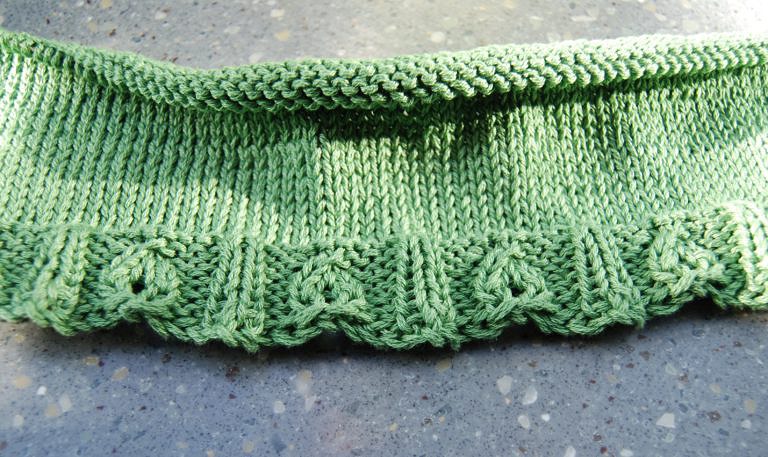