We’ve been doing lots of evening walks in the dark after work recently. Work has been especially interesting and hectic recently, and it’s nice to have time to rehash. We’ve been picking a different route through the neighbourhoods each time, which works well because it’s easy to add loops or cut back. We’re getting better at ending up where we expect to instead of facing dead ends and cul de sacs.

Last Sunday, we went for a walk in the daylight, with the express purpose of taking photos of some of the places we’ve found on earlier loops.

There’s a huge park down the street, and while it was already great and constantly in use before, the town has been doing a series of improvement projects for the last year or so. They started by resurfacing some of the playing fields and fixing the utility buildings, then they overhauled one playground and built a second from scratch, and now they’re redoing more playing fields and fixing drainage on the walking trails where it used to get swampy. This photo of the redone playground was taken late afternoon after it started to drizzle, but there were still lots of families out. (Sorry for the tree-filled photo – it’s hard to get far enough away to see the size of it without having trees in the way of the view.)

They have bunch of towers, slides, bridges, climbing nets, and balance beams. I don’t know who designed it, but they seem wonderfully free of the “playgrounds are dangerous” mentality – there are lots of moving parts, things to hang from, and high heights. It swarms with kids. There’s a separate area with a little structure for toddlers (a basic structure with a slide), a set of big swings, and a set of baby swings. The new playground is on the other side of the playing fields, and has tire swings, more climbing webs, a merry go round (one of the ones where kids run to make it spin and then jump on), a water park, and some huge (10’ tall) climbing boulders, plus new basketball courts. I love that the park is used by all ages – young families are well represented, but you also see a LOT of teenagers, adults of all ages, dogs, etc.

If you cut through the park on a diagonal, there’s a new street (used to be one house and lots of empty forest, now it’s been chunked into teeny lots with packed-in houses that list at $800K). The construction is relatively pretty, and the location is great, but it all just seems so new, fake, and somewhat pretentious. Pretty much as sanitized and unmagical as things get. At the end of the street, there’s a cul de sac next to some fenced off “wilderness”. And if you look over the fence, this is what you see: 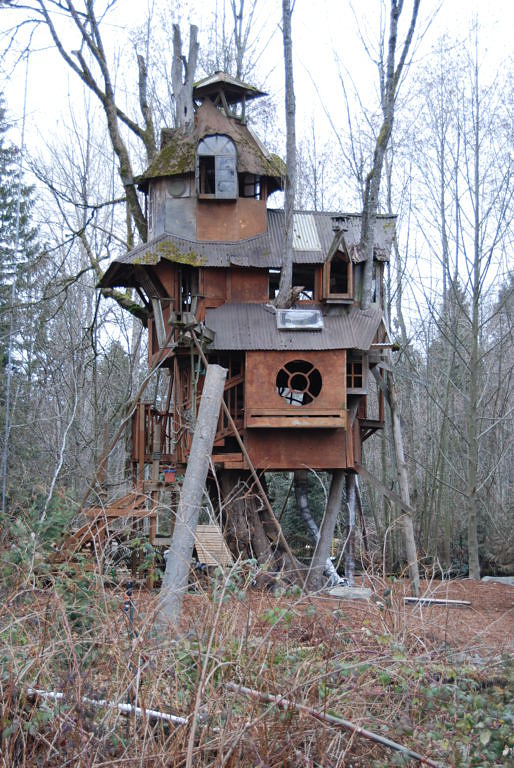 Pure magic. Pictures aren’t going to do this justice. Someone build a three story tree house (and raised it up a good 12 feet off the ground) out of scrap wood and metal . They surrounded it with a moat, built a tire swing, and built windows and skylights. It looks like something out of a fairy tale (the non-Disney version, where the evil magic is probably more powerful than the good), or out of an imagination-tinged dream/memory from your childhood, and we keep going back to check on it and make sure it’s still there. There’s a gorgeous, huge house tucked behind it, and a guest house with amazing wood and stone detailing. I would love to know what sort of eccentric, wonderful people built it. 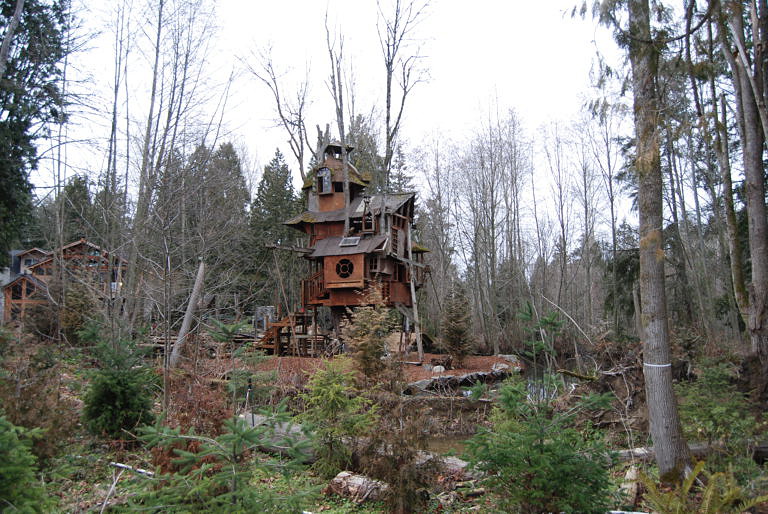 If you take the trail back through the woods and cut the fourth corner of the park, you come out in another neighbourhood, right across from this treasure (pun intended). 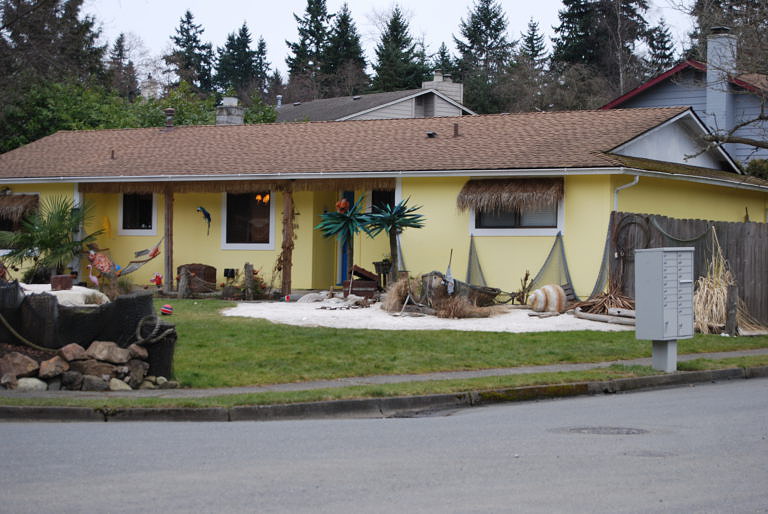 I can’t imagine what possessed them, but it looks like they were aiming for the look of a tourist trap seafood place. They were VERY thorough: white sandy beaches (plural) in the yard, fishing netting and thick ropes draped artistically over the fake piers, plastic parrots, a marooned rowboat, a stuffed guy snoozing off his daiquiris in the hammock by the front door, fake flamingos strutting under fake palm trees, and tiki fringe everywhere. 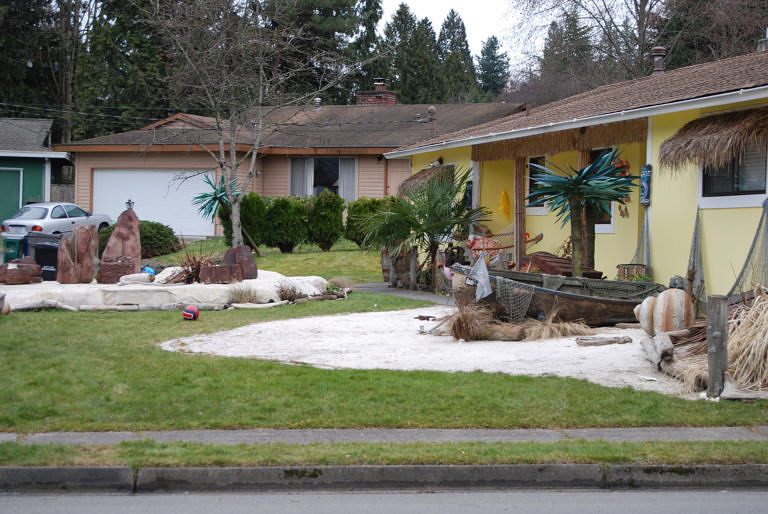 Can you even imagine what the neighbours think?