We had a huge tank event tonight! The clownfish spawned!! Kevin was starting a water change and saw the eggs!! 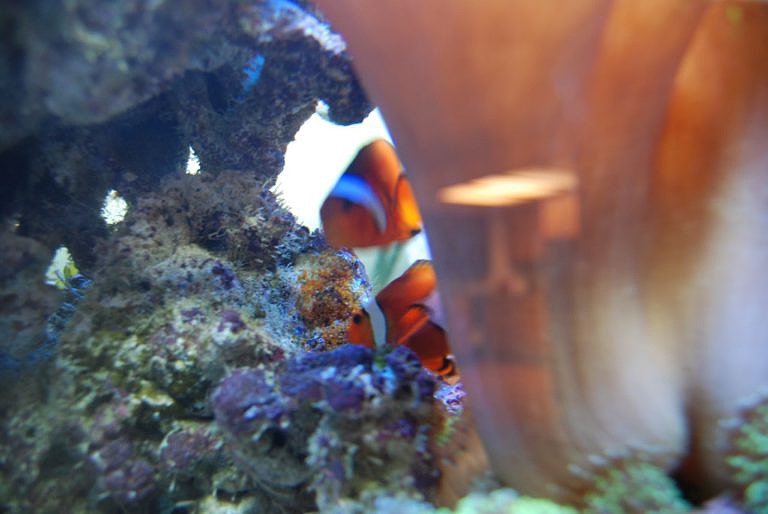 We’ve had the clowns for more than four years, and kept hoping they’d mate. Clownfish are hermaphrodites: they start out male, pair off, and then one fish becomes dominant, quite a bit larger, and female. Clack has been the bigger fish for years, and they’ve displayed lots of the typical clownfish pairing behaviour, but no spawning until now!

I need to read up on more about exactly what happens (since clownfish are one of the most successfully captive-bred fish, there’s a lot of information out there), but Click (male) and Clack (female) did alternating passes of circling around the eggs. They bind them to the rock (I think that’s Click’s job?), lay eggs (Clack) and fertilize them (Click). They chose a spot right behind the leather, which makes sense as usually Clowns lay eggs on rock near the base of their anemone. 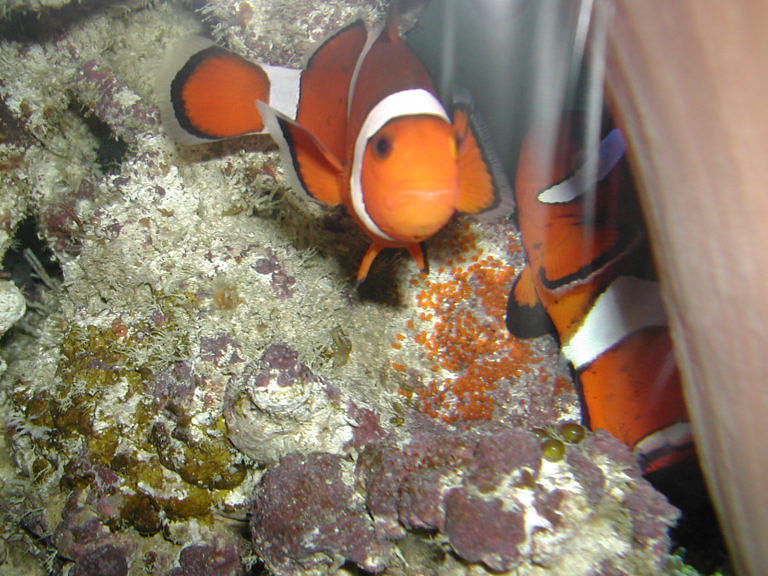 There are many steps, special food, and extra tanks involved in raising fish fry into baby clowns, so we’ll probably let things take their course (ie, either the eggs or fry will be eaten by other creatures in the tank), but Kevin was having fun brainstorming baby clownfish names: Clickety, Clackety, Yakkity, and Yak were leading contenders. 🙂

I got a few videos of them as they spawned. We were so captivated and delighted. The first has reflections from the kitchen light (oops! sorry!) but you can see well how first one circles, then the other. They repeated this for ages (We watched for well over a half hour, and only saw a portion.)

At first I was disappointed by the second video because Click stopped mid-circle and seemed to lunge at Clack. I wasn’t paying enough attention to the other creatures in the tank though, since the shrimp had decided to come check things out. I might not have noticed him, but the Clowns definitely did and they chased him off.