I’m having fun working the first front of the Sunrise Circle Jacket. You knit the sleeve up from the wrist, and then in addition to decreasing as usual for the shoulder, you start increasing to form a steadily growing semi-circle for the front.

It’s an interesting design, but it takes a fair amount of attention to knit. The designer made the increases appear at random (a very pretty effect, so you don’t see spokes radiating out across the chest), which means that the increases are in a different spot on each row of the chart. I’d been counting as I went, but that was going poorly since I tend to knit while reading and I kept flying past the increases. Finally, I got smart at row 47 and started marking the increases with white stitch markers in advance before I knit the row. Now it’s going much faster, since I only have to stop and count once at the beginning, instead of several iterations of counting and ripping back. Here’s a closeup of the semi-circle forming, with randomly-spaced increases, and my white stitch markers waiting for the next row. 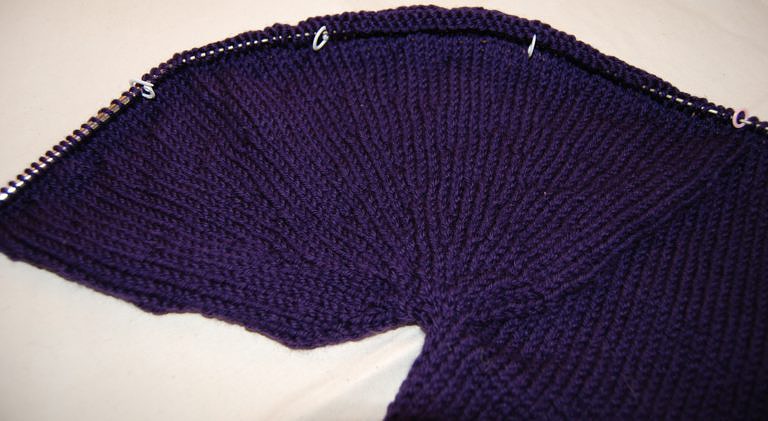 I’d love if I could ever finish the sweater this week. I’m in great shape on maternity clothes except for long-sleeved shirts. All of the maternity sites I know only seem to sell short sleeves and ¾ sleeves, made of surprisingly thin fabric. Since it’s still in the forties most days, that just isn’t sufficient. I’ve been just wearing a few loose pre-maternity sweaters, but all but two are suddenly too short and I’m in dire need of new options.

One thought on “Getting smarter”