We had a great treat this weekend – a package arrived from California with a hand knit baby sweater from my friend Amanda! It’s so well done, and I love the offset cable and the seed stitch detailing at the edges. 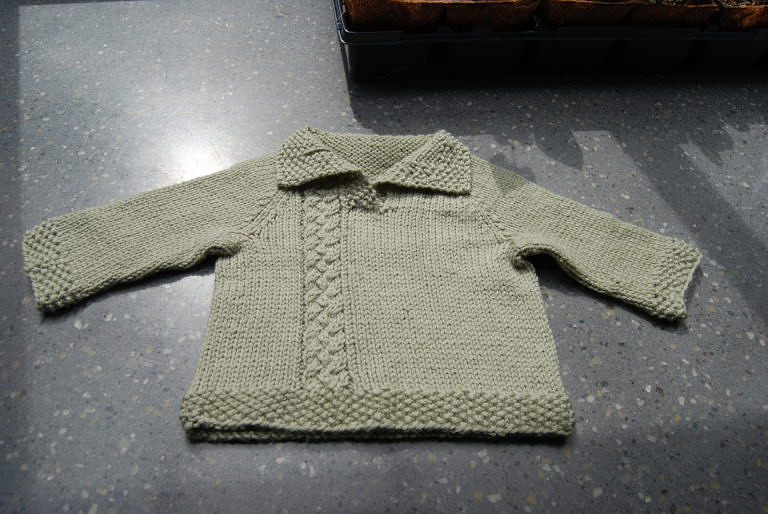 As much as I love the color and pattern, my favourite part is the way it feels. I wish that you could blog texture – the yarn is a gorgeous merino/microfiber/cashmere blend and it is so wonderfully soft. It’s such a treat to have a hand knit that I didn’t make myself, and such a beautiful one at that!

All seems to be going well with the baby. He’s been kicking away with increasing intensity. Kevin felt him kick for the first time almost two weeks ago (so exciting!!), and when he was describing it to a friend later he mentioned that he could see the kick as well. I thought he was exaggerating but he turned out to be sincere – it hadn’t occurred to me to try to watch. When the baby really gets going, as he seems to in the evenings, it’s kind of like watching a lightning storm pass overhead – you’re not entirely sure where to watch for the next one, and never sure whether the previous kick was the final one of the series. Most of them you just see out of the corner of your vision, but every now and then there’s a kick that’s so obvious and exactly where your gaze fell. It’s a bizarre sight, but captivating.

For the last week or two, we’ve been sorting our way through all of the tons of baby gear out there to figure out what we think we’ll need. We’ve arrived at decisions for many of the big things (a crib, cloth diapers, breastfeeding details for when I go back to work, daycare, assorted must-haves), and are making good progress on others (a pediatrician, car seats, sorting out the zillion options available for pack n plays…). We certainly are not wanting for options. We still probably won’t start buying things in earnest for a few months, but it’s nice to have brands and rough price points figured out, and an increasingly complete list. (We both seem to be magnets for advice right now, and I’m appreciating a larger context to fit all of it into, instead of trying to keep track of all of the individual comments and data points as they’re given.)