When we bought the house, all three of our bedrooms had the same stained, unravelling Berber carpet that we’d had replaced in the family room last winter. I’m not sure when it was put in – it seems slightly unlikely that it dated all the way back to the family room addition in the mid-eighties, but not impossible given its condition? The previous owners had all of the carpets cleaned professionally, which really didn’t make much of a dent, and then we did our best to cover the worst of the stains with furniture and ignore the rest. Once we knew that everything was going to be moved around for the baby, though, it didn’t take us very long to start talking about using that opportunity to replace the bedroom carpet as well. We decided to go with the same carpet we installed in the family room, just different colors.

It’s hard to photograph expanses of horrible beige berber, but here’s a sample before photo: 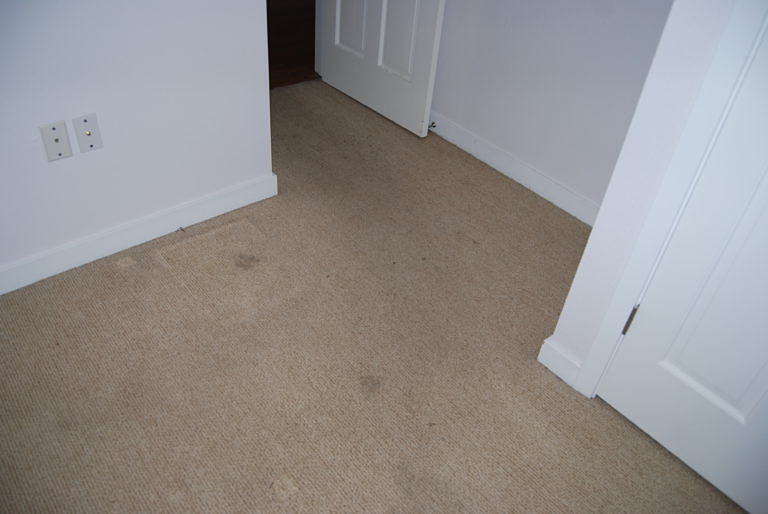 The guys showed up, took out all of our old carpet, and revealed this linoleum loveliness underneath: 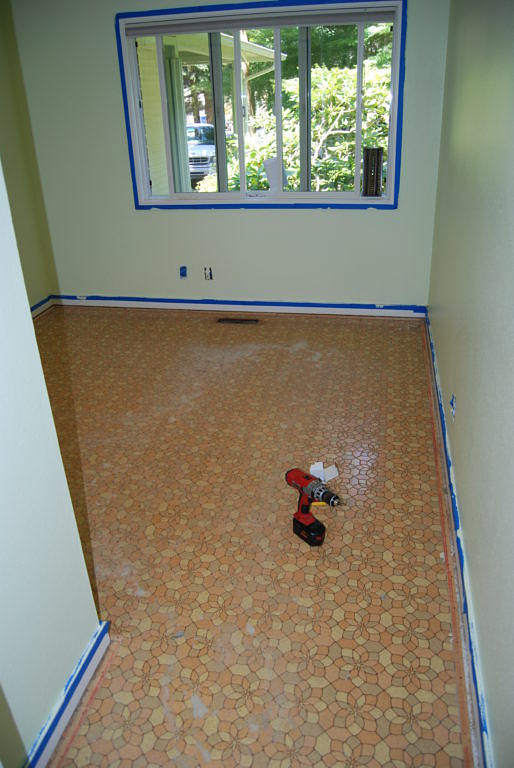 (Who puts linoleum in a bedroom??) Glad that we covered that right back up. 🙂 Kevin took advantage of the exposed subfloors/linoleum to fix a bunch of loud squeaks, especially in our room and the baby’s room. It makes such a difference to have silence while walking.

While the guys were working, we had an unexpected visitor fly in through the open front door: 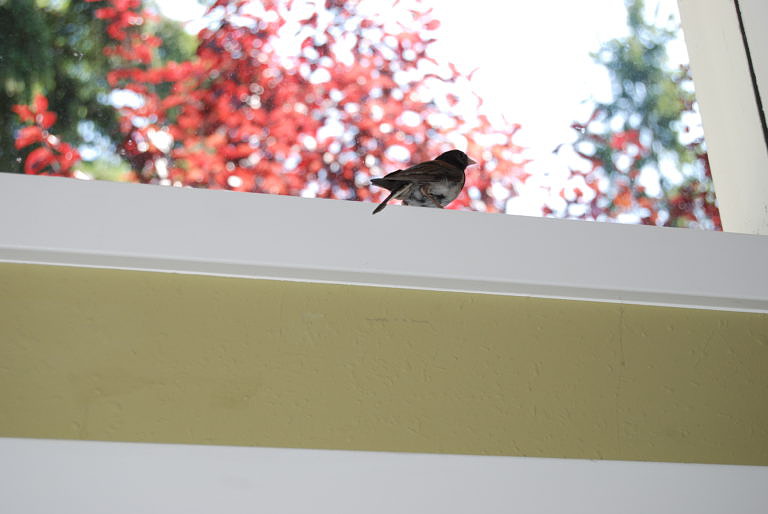 He was quite determined to get back outside through the (unopenable) living room windows, but we managed to coax him off his perch and out the door pretty quickly, and without a mess. The carpet guys seemed amused by our efforts.

The new carpet looks amazing, and we love the colors we ended up with. Here’s our new shared office – I really just love the way that this one works with the pink walls. 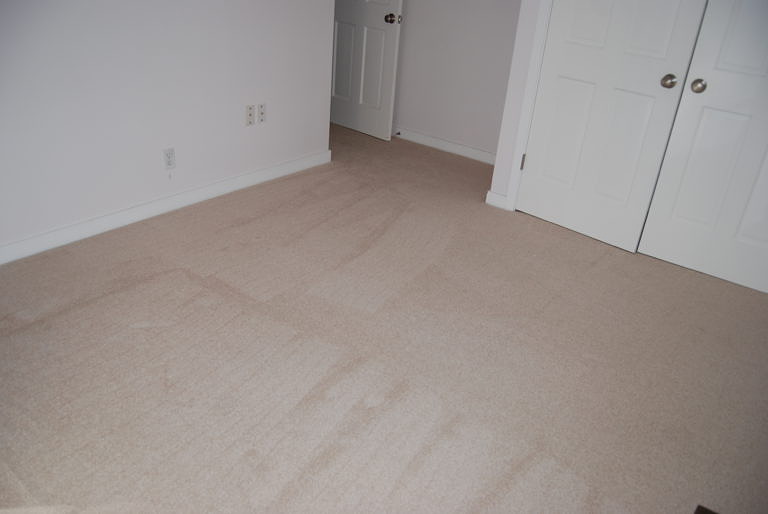 We have the guest bed and trundle moved back in, and have started assembling our new desks. The closet is where we’ll store most of what’s now in the family room once we weed it down a bit, and my guess is that it will be a work in progress for a week or two.

Here’s the baby’s room, with its pretty new carpet and paint: 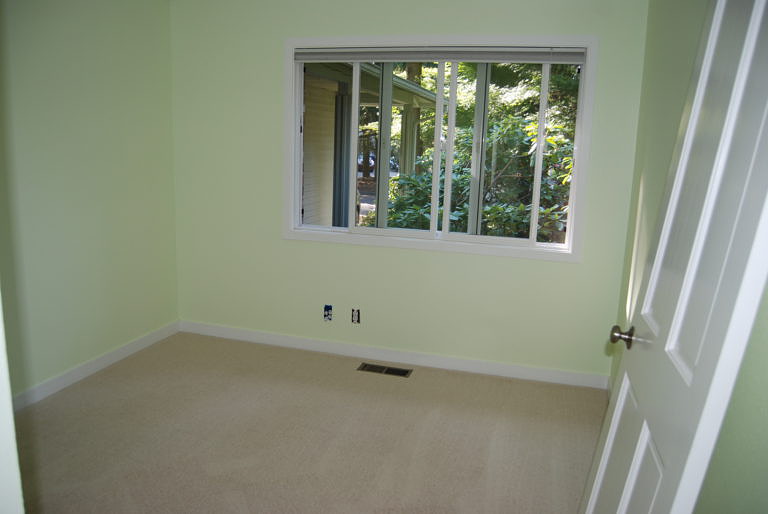 The paint color looks yellow in the mornings, green at night, and varies remarkably in brightness during the day depending on the light. There’s one part of the day that seems to bring out a color that I can only describe as “lime yogurt” and that I’m not that fond of, but other than that one shade we’re both quite pleased with it. Between the north-west exposure and the fact that the garage blocks almost all direct light, we worried about finding a color that would have some saturation without making the room too dark. I like the end result. Here’s the view looking from the window to the closet: 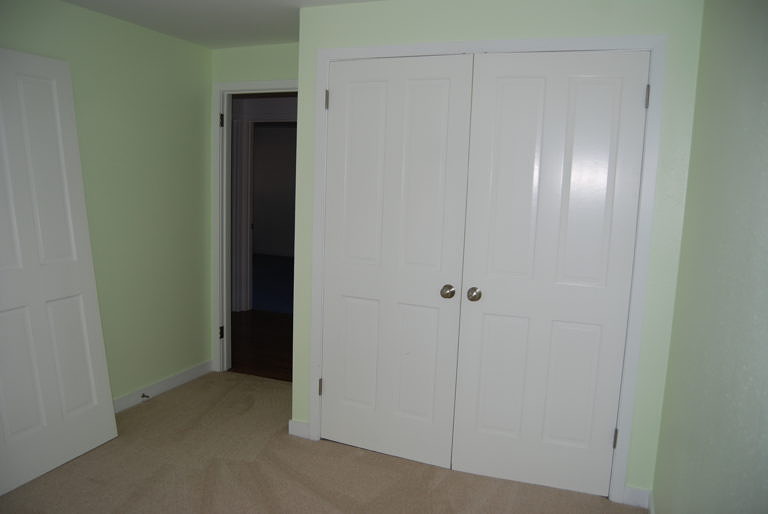 (Unfortunately the new carpet and pad are higher than the old, so we’re going to have to remove most of the doors, sand and paint the bottoms, and rehang them. Ugh. Nothing like unanticipated extra steps.)

And we chose a medium blue carpet for our room:

I was afraid that the new carpet color wouldn’t work with the existing wall color, but I’m actually a huge fan. We were both especially impressed with the work they did in the closet, installing around all of the parts of the built-in and modular shelving. (This photo came out pretty yellow, so the carpet looks greyer than in reality). 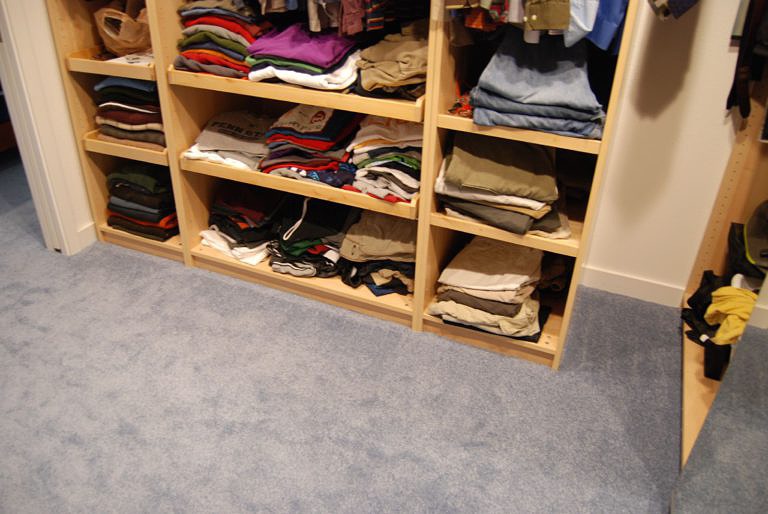 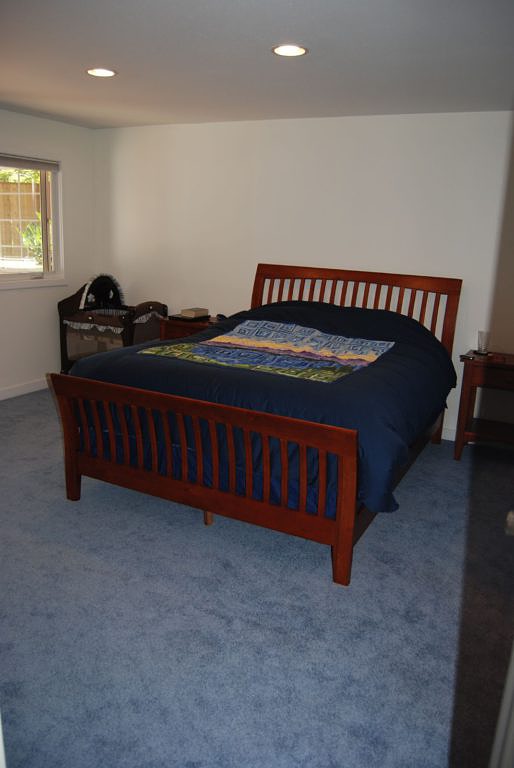 … including the baby’s bassinet!! Very exciting to see that waiting for his arrival! 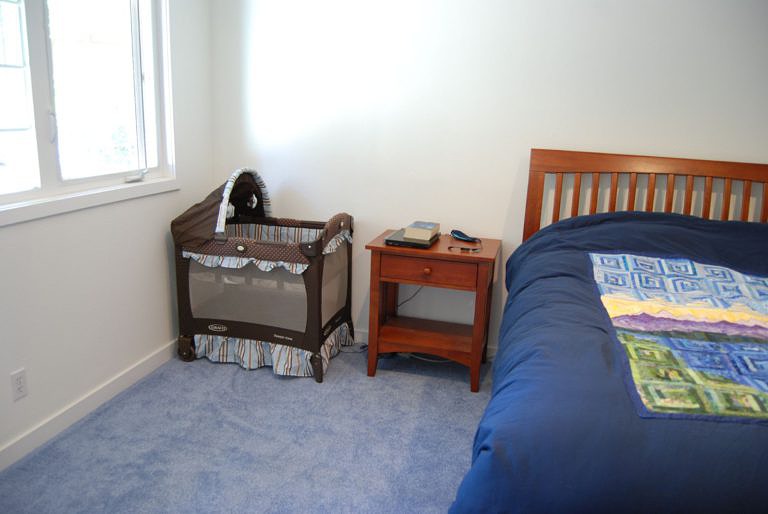 Such a huge improvement!