Our house doesn’t have great cross ventilation in the living room, fish room and kitchen. The bedrooms manage to move some air with the windows open, and the family room is great with all of those big screened windows and the ceiling fan, but the main rooms of the house get hot and just stay that way. When we went back to Kevin’s parents’ house in May, I was impressed at the retracting screen door that they’d installed in their kitchen. We decided to get quotes for them, and now we have screens on the front door, and across the double door in the living room. You can just see the white frame around the edges, and the handle on the far right: 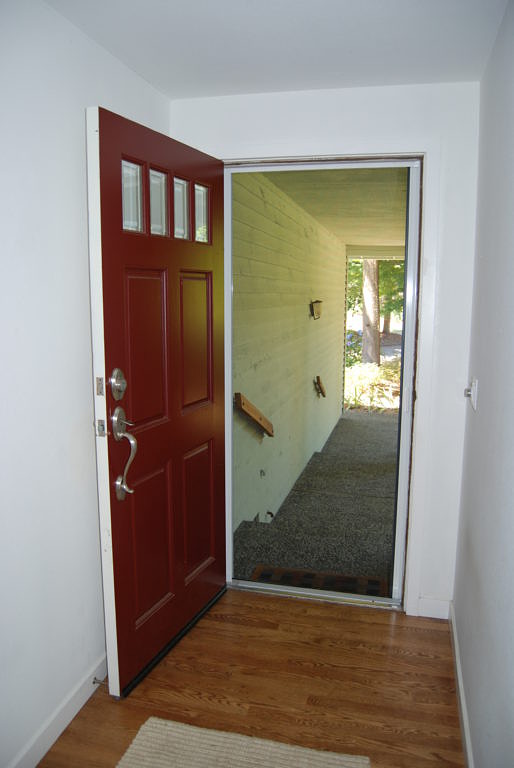 When the doors are open, we get an amazing corridor of air flow through the living room. With all of the heat this week, the air outside generally doesn’t start to get cooler than the house temps until around 9 pm. By that point, the house is hot and stuffy, and we’re wild to get new, cooler air through. The guy came and installed them right before the worst of the heat hit, and they’ve been an amazing addition.

I think they’re going to be just as exciting once the heat finally breaks (supposedly Tuesday or Wednesday of next week?) and we can keep them open during the day for nice breezes through the house. (Again, I know these aren’t great photos – it’s hard to photograph something that’s effectively see-though – but at least you can at least see the white trim around the edges and the handle on the far left. You can also see how scorched the poor yard is.) 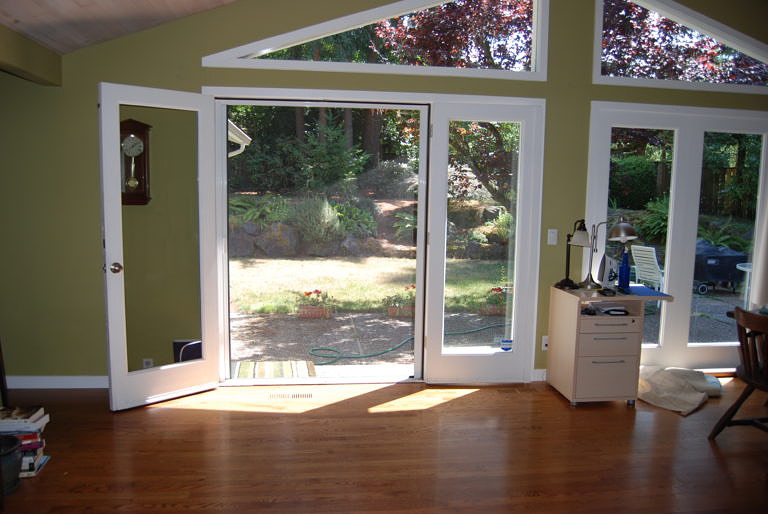 Those double doors in the living room are so appealing when they’re open – our back yard is one of our favourite parts of the house and it’s nice to feel like it’s even more accessible. I’ve sort of felt like we haven’t gotten to take advantage of our Seattle summer this year, since time on my feet or out in the sun hasn’t been as appealing as it usually is. We both have parental leave (Kevin’s taking two months, and I get five), and I’m having visions of how pleasant August and even September might be with our new screens. Hopefully that won’t doom us to another cold, rainy August?

One thought on “Marvelous Additions”