Kevin and I apparently had a bit of a miscommunication about the wasp nest in our backyard. (I think I posted about it, but a quick recap: I’d been out in the yard in early July trimming bushes, when I decided to go deadhead the poor, ugly rhododendron in the backyard. I was only a few flowers in when all of a sudden there were bugs everywhere – I thought they were horseflies at first – and I ended up with 7 stings. Ouch.) Of the two of us, Kevin’s demonstrated quite a bit of success as the bee-fighter, and the whole poisons and late pregnancy thing confirmed that he would be the one to take on the nest. While I was calming down after the stings, I thought I’d said something along the lines of “you don’t have to eradicate them this instant, but of COURSE the nest needs to go”. For some things, I’m live-and-let-live, but there are definitely limits (like spiders who find their way into the house, and wasps that sting me in my own yard). Kevin heard something more along the lines of “bees are our friends, we’ll just avoid the area”. I was trying hard not to pester him about it, but finally asked, and we were both so pleased to realize there had been a misunderstanding.

So after work, Kevin went out with his telephoto lens to assess the situation and find the entry hole that he’d be spraying the killer foam into. The nest is an amazing thing. 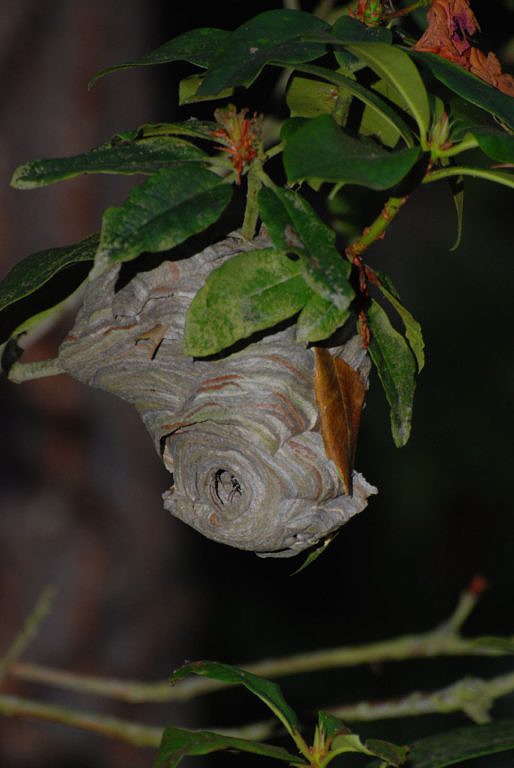 It was built right under one of the groups of leaves. You can actually see in that photo where I’d removed one flower completely (center bottom), and gotten most of a second one (right above the nest). Since I was working with both hands, no wonder they went after me – I must have nearly had both hands directly on their home.

I think the colors are so pretty, as is the wavy construction. It’s pretty impressive, too, the way they just add more layers in spite of the things in the way, like the leaves that you can see being encompassed by the growing nest. 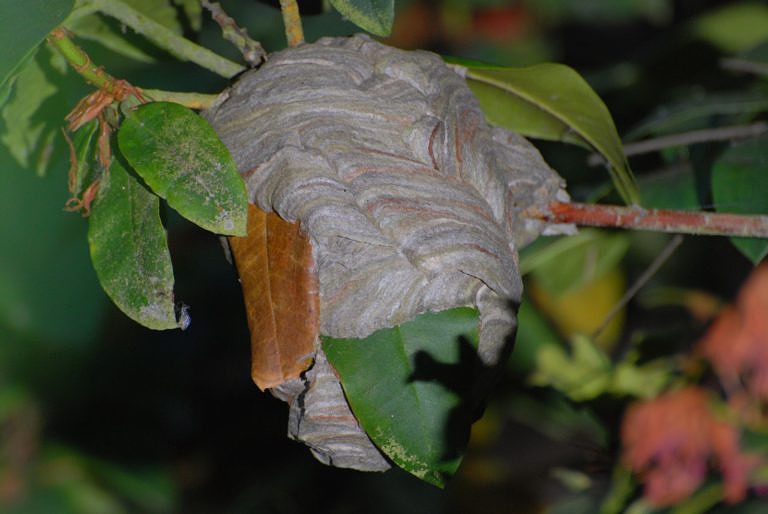 I was so glad that Kevin got the neat photos, and even happier when Operation Wasp Removal was a success and Kevin emerged victorious without any stings.

One thought on “Pretty, but gone”