After relatively few mishaps so far (the worst have involved accidental water spillage from the buckets), we made a massive mistake last week. The addition of the quarantine tank was supposed to keep our clowns happy and healthy so that we could put them into the main system in about three weeks, confident that they were disease-free. We were doing twice-weekly 30% water changes from the main tank and seemed to be cruising along until one of our clowns all of a sudden started acting like a terribly sick fish. He was just sitting inside the pvc tubes breathing, stopped eating, and his face all of a sudden looked all sunken.

We tested the water, and realized that our ammonia, nitrite and nitrate had gotten way too high. The symptoms (thank you, Google) matched perfectly for ammonia- and nitrite-poisoning (and had been there for several days before we realized: breathing at the surface, listlessness, etc). We did two water changes in 10 hours, and it didn’t bring the quality up at all, so we put the clowns in the main tank to try to save them (the second one was having symptoms too by that point).

When we let them go in the main tank, our sick guy looked like this for the entire first day: 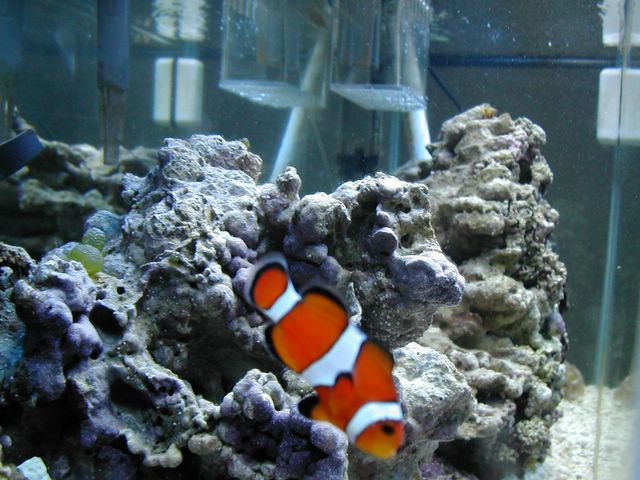 head down, tail up, and breathing hard. The fish store gave him a 50% chance of pulling through, and I was utterly wracked with guilt, since we’d essentially poisoned our fish and it should have been preventable. Our second fish bounced back pretty fast and he would go off to swim around the tank for a few seconds, then beeline back and nudge his friend, then go off again. They’re such a pair.

This was a typical scene by yesterday: the sick clown down in the corner, spending minimum energy, the well one off exploring and playing with the currents, and the gramma lurking unhappily by his cave, ready to give chase and nip any dumb clownfish that got too close. We had to rearrange the rocks to give the clowns a corner with some protection because the gramma wasn’t graciously adapting to his new tankmates. 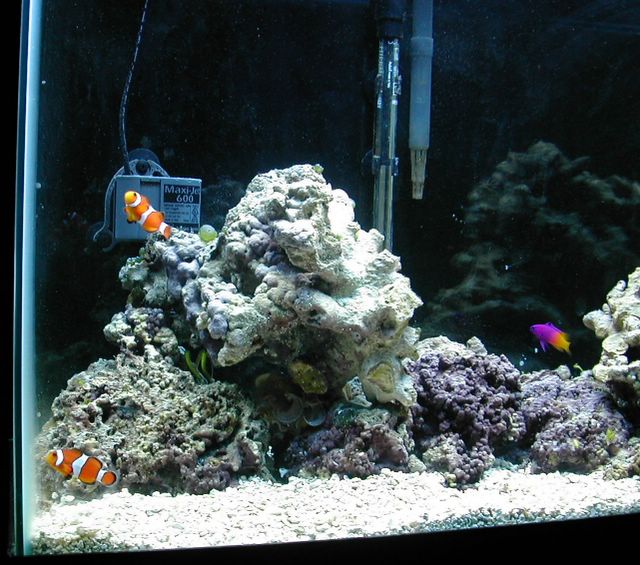 Today, our guy was looking a bit better, and even had enough energy to go play with his reflection. 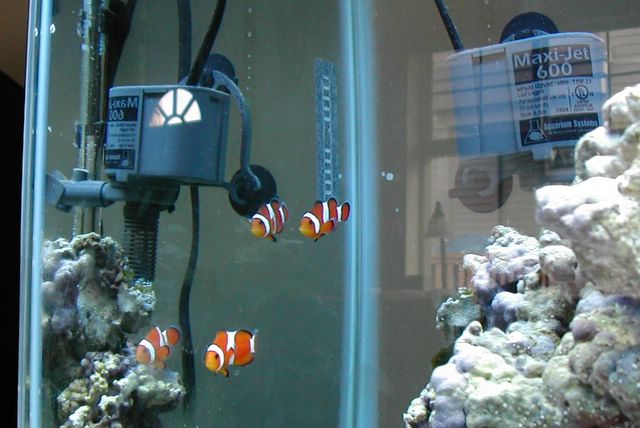 He still hasn’t eaten though, so it remains very much a fingers-crossed situation.

3 thoughts on “Tough Week on the Fish Front”