Alison of the blue blog fame is hosting a fix-a-thon knit-along for February.

I don’t have any knitting of my own to go back and rework. (This isn’t a sign of knitting perfection as much as my slooow progress — if you don’t make a lot, there isn’t much to go back and fix.) Instead, I have two store-bought sweaters that have been irking me. One’s the lovely J. Crew one with the unfortunate pleated shoulders that I ripped out way back in October. I would love to get this finished.

The second, which I just attacked and finished as a show of good faith is a dark blue turtleneck that I would love a lot more if it was less suffocating. I cut off about 2/3 of the neck, picked up the stitches, and bound off to make a mock turtleneck. I forgot to take a picture before I started, but I actually have two versions of this sweater since Express cut the price so much late last winter. So, here’s the post-op dark blue with it’s unaltered counterpart:

And here’s a rather serious shot of it on: 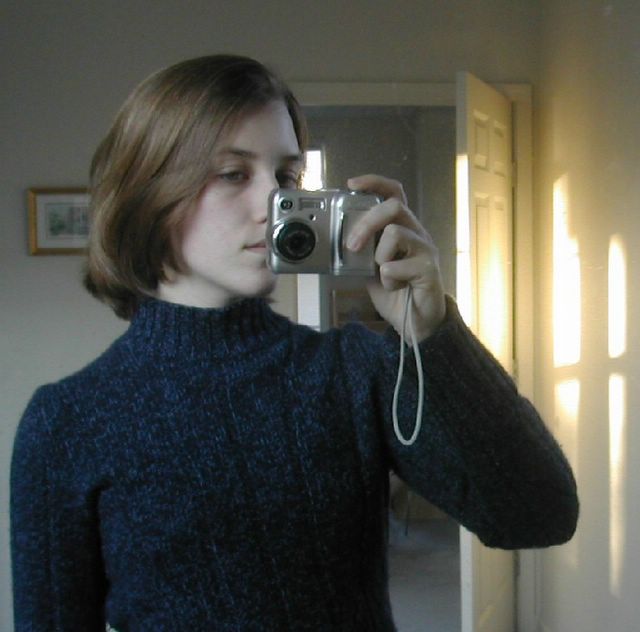 (You would think that pressing the button on the camera was an extremely difficult maneuver, based on my facial expression. Geez. 🙂 Also, note the *bright* sunshine streaming in through the window. Not as fun as the northeastern snow storm, but at least further proof that it isn’t always raining in Seattle.)

Also, thanks to everyone for the fish-hoping. He’s eating again, exploring, and playing with his mate. I tried to take a picture of him as proof that he really is looking better, but he wouldn’t stay still long enough to get a non-blurry shot:

I suppose that ought to be proof enough. 🙂

One thought on “Finally some knitting”