Perhaps inspired by my parents’ impending relocation into a grander space, Kevin took mercy on the hermit crabs yesterday and went to the fish store to buy new shells for them to move into. There’s been a high level of fighting over the last week, which tends to be the sign that they’re in need of more housing options. He bought 34 shells (we have about 15 crabs, give or take. Lest the number of shells sounds exorbitant, they will need a series of new homes, so it’s not too bad. Also, as he correctly pointed out, our nearly two hours of fun watching them with the new shells completely justified the $1.85 that they cost). Here are a few of them all laid out: 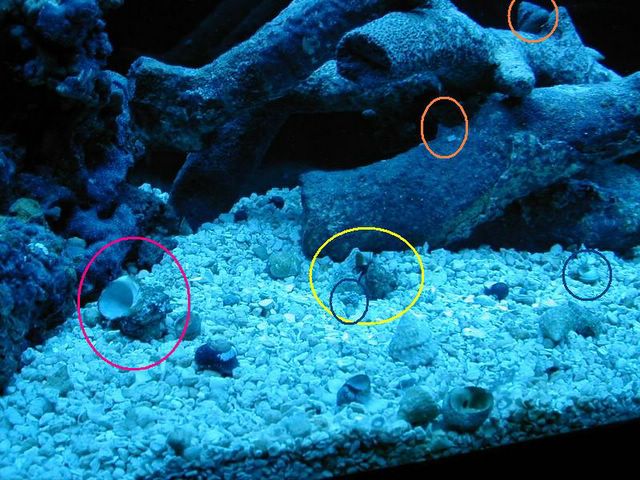 Pink circle: The biggest of the new shells is over an inch wide. I’m guessing that no one will pick this up for a while, if ever, but it’s a neat shell.
Yellow circle: our biggest guy (in the purple shell to the right) looks at a new white home.
Orange circles: some of our snails, cleaning the rocks.
Purple circles: 2 of the recently-abandoned shells.

By the time we headed for bed, there were 4 crabs in spanking new shells. Meanwhile, here’s the best shot of the gramma that we have to date. 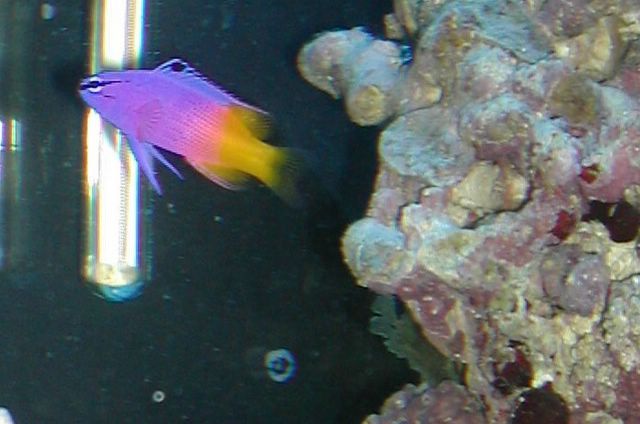 I used to feed the fish around noon and again a bit past nine. Obviously, with my work schedule that isn’t feasible anymore. Instead, we’ve switched to before and after work. Unfortunately, the fish haven’t really been on board with this plan. The clowns seem to feel the same way about eating early as I do, and the gramma generally doesn’t leave his rock cave until the blue lights come on, regardless of feeding. (We have a set of blue lights and a set of white lights. The blue lights come on around 10:20 a.m., the white come on close to 11. In theory, this is supposed to create a sunrise effect for our guys in the tank.) The clowns stopped eating altogether for a few days, then were so hungry that they’d wrestle with each other at night rather than eating the more-than-enough food. It was like they were more concerned with making sure that the other guy didn’t get more food than they did than they were with actually eating.

In the last two days, the gramma has started coming out around nine-thirty a.m. (it’s been sunny, so that might help), and the clowns have been eating in the morning, though only a bit. They still dive at the food, but they spit most of it out immediately. I’ve switched the night routine to giving them a little bit when I first walk in the door and they’re too hungry to take much, and then doing a real meal an hour or two later.

The most interesting behavioral consequence of this is that the gramma is finally leaving his cave and taking over the tank. I don’t know it the new feeding schedule is to blame/thank, or if he’s just finally used to the clowns, but he’s been zipping everywhere. It’s fun to watch, even though the clowns give him more space than I think he needs. The photo above is on one of his missions about the tank. You can see the v-line heading back from his eye — this showed up about two months ago and really concerned me — I was afraid it was a skin disease. It turns out that it’s a sign of maturity, so our gramma is an adult. Cheers to him acting like it.