Another fun trip to the fish store last weekend! It’s taken me a while to post because all of the things are hard to photograph. It’ll be 50 pictures later and this is the best that I’ll have. I’ll keep working at it, but here’s a sample for now.

We have a small colony of 5 red mushrooms, captive bred. I was thinking that they would be pretty, but boring, but it turns out that they’re constantly moving and slowly sucking in and out, so they’re quite interesting to watch. I still don’t think that they have appropriate water flow, but we’re working on that and hopefully the little guys will start looking happier. The largest is about the size of a silver dollar when he’s extended this much. 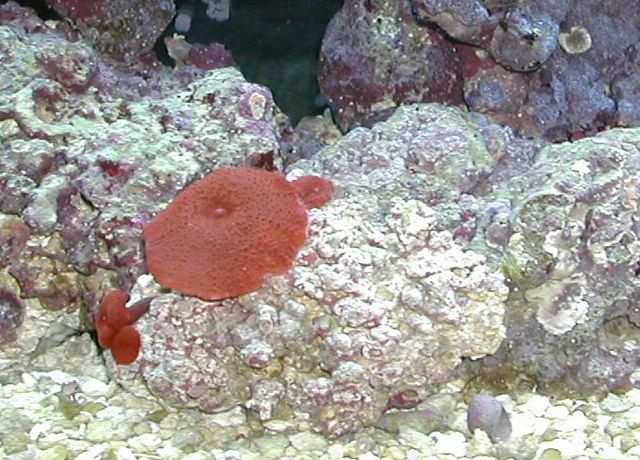 We also have a new little cleaner shrimp. (“Jacques” — thank you, pixar.) Last night he molted, which was alarming at first (I saw that brightly colored tail floating around in the tank and my heart sank), but interesting once I realize he was alright. We’ve heard that these guys set up cleaning stations for the fish, so I’m keeping my fingers crossed. It’s hard to picture the gramma getting spa treatment… 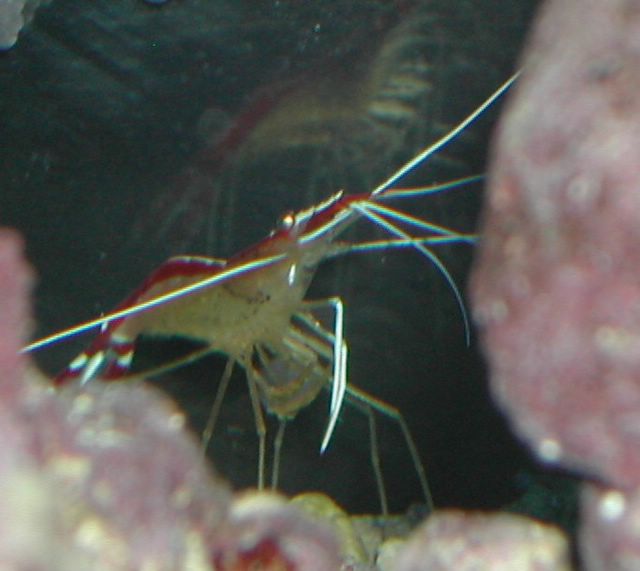 The photo above is after it picked up extra food that fell through the xenia (see below for the story), but here are some better options if you want more professional photos of him and his lovely tail. 🙂

We’re also the happy owners of new zooanthids (round little tubes with a fringe of antennas that grow in colonies) and yellow polyps (similar, but taller tubes, larger fringe, and a “button” in the middle of the face). Our original three zoos that came attached to our live rock have been thriving, as seen on the left. We have two colonies, and at last count, there were over twenty zoos. These new ones have thus far been impossible to photograph (not enough contrast with the rock they’re on), but you can at least get a sense of the colors, and I’ll keep trying. (You can see one of our blurry bluelegged crabs on the edge — whatever muck was on that rock, they loved it. We had to move it to the gravel after 7 (!) started fighting over a particularly yummy spot and knocked the whole thing down.)

Other than the new guys, the big excitement in the tank concerns the xenia (ever growing and branching off a separate trunk!) and the clowns. About a week and a half ago, the clowns suddenly stopped ignoring everything not man-made, and started very methodically brushing by the xenia. They worked up to swimming through, and even though they still spend the majority of their time in their usual spot in the corner, there’s definitely an ongoing interest in the xenia. We brought it up at the fishstore and were told that this dance is used to gradually accumulate anemone’s proteins so that eventually the anenome recognizes the clown as part of itself and doesn’t sting it. The xenia is tolerating it, but we’re keeping an eye out, since two clowns taking up house could be stressful. I don’t know how we’d discourage them exactly, but… 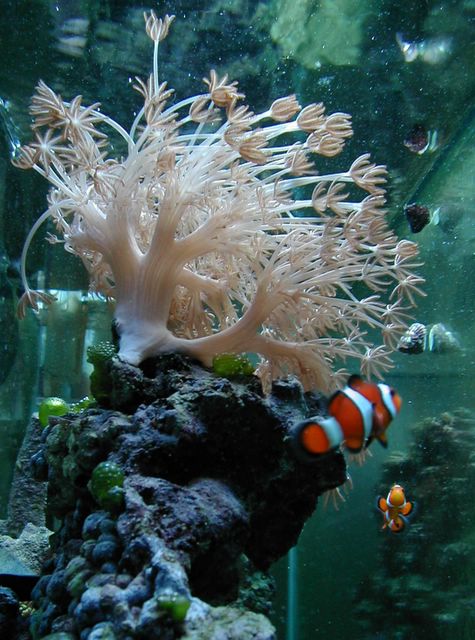 Then, this week, the clowns started racing over to any food we put in the tank (not atypical, they eat like golden retrievers) then zipping back to the xenia and spitting it out. As funny as this game was, I lost my amusement quickly — the gramma and clowns weren’t getting any, the xenia was getting littered with pieces of food it can’t digest (enter Jacques’ role…) and I was getting worried about leaving the food in the tank, since extra food decomposes and can poison the water. I’ve started reaching into the tank and putting the food closer to the gramma (he hates the hand, but seems hungry enough to ignore it) and the clowns have desisted a bit. Only 55 gallons, but always busy.

P.S. WOW. This is a tank full of zoos, xenia, and other awesome easy corals… Something to aspire to? It’s beautiful. 🙂