I finally got a step closer to the vision of two 55 gallon tanks, the top one being a fish and corals display tank, and the bottom being a refugium. In one marathon session on Sunday, I moved everything (including 2/3 of the original tank’s water) over to the new sandy-bottomed tank. I am so happy with the result. I flipped a few rocks, and so now we have more space for corals, and with the new tank’s placement in the room, we can now see the view fully from three side, and about a third of the way across the back of the tank. We’ve discovered new clams, new crabs, and an enormous new stinging worm (the source of my endless rash?) since making the switch. (Pictures below, and with my pinky finger for reference. It was about an inch behind the glass, so the comparison is pretty accurate. How does something that enormous go undetected for eight months??)

For those, like me, who find clams much more benign, here’s a photo of one of our four-and-counting new ones: 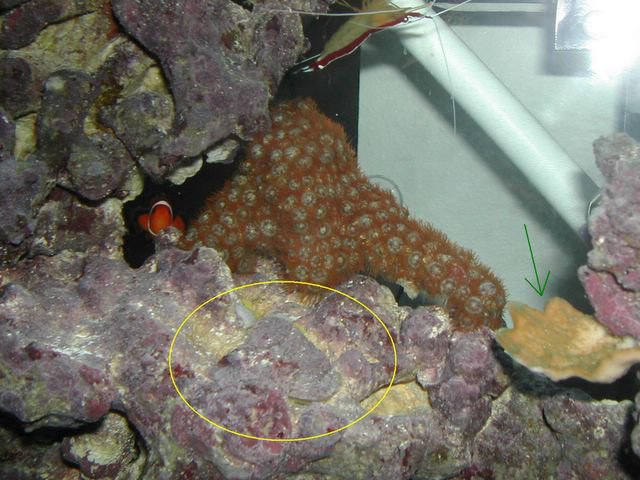 The yellow encircles the clam, and the green arrow points to one of our SPS guys, who I’m delitghted to say is growing again now that we’ve restarted the kalkwasser drip (for calcium/alkalinity). Also visible are the orange zoos, and Clack who came over to see what the previous flash was about.

I plucked nearly all of the xenia off of the back glass, so now we’re back down to a “small” colony of three trees, plus the pom-pom xenia. The sand looks great, especially with the additional T5 light that Kevin picked up. I need to figure out some sort of veil or sheild to make for our top lights — now that the tank is higher and the tank is more in the center of the room, it’s quite blinding to glance at the tank when you’re sitting on the couch. I’m thinking some fabric and velcro ought to do the trick. 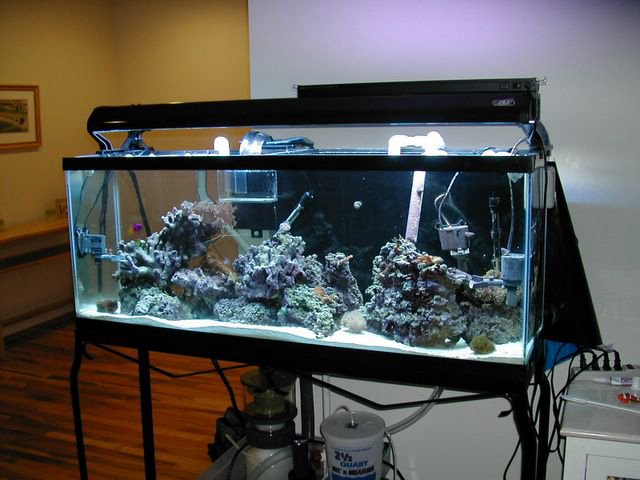 Now that the original tank is cleaned out and dry, I’ll start siliconing plexiglass baffles into the tank to create three sections: one chamber for water to enter from above and run through the protein skimmer, a second to pump it back up to the main tank, and a large space between them for a deep sand bed and plenty of algae.