I made a bit of progress yesterday, but didn’t actually start knitting until well after dinner. Instead, I made progress on two projects so that I could get them folded up and out of the way before my job starts tomorrow. First, I finished redoing the sleeves of my purple cable sweater and wet-blocked it: 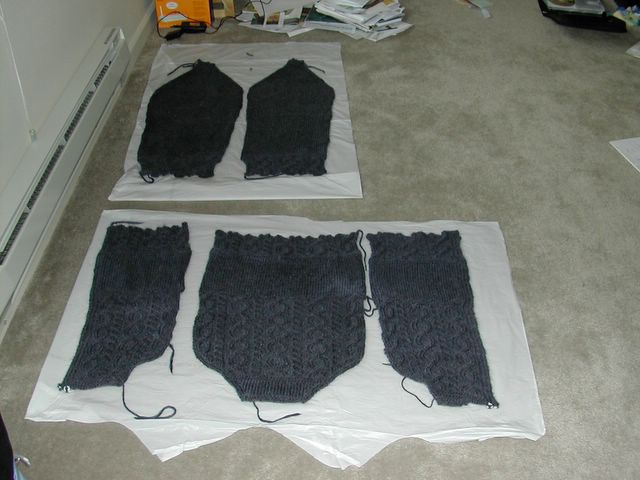 I know a lot of people don’t like wet-blocking wool, but I needed to widen the cable sections, so it seemed like the best option. In general, I find wet-blocking much more effective than spritzing or steaming.

Then, I finished up the sky squares of the quilt: 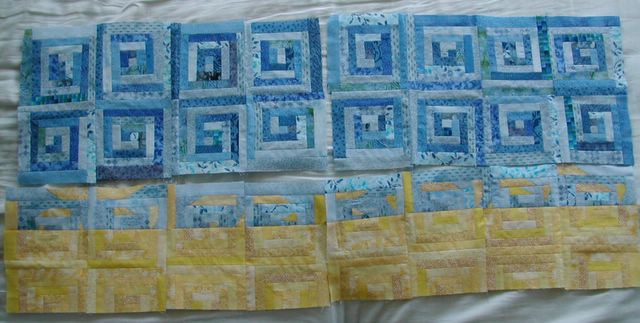 I’m pleased with the way they came out, but I’m not completely sewing it up yet. I think I may end up adding another row of sky squares underneath the two pure blue ones. It would be a mix of the light blues used in the blue and yellow squares plus two or three of the medium blues. I think it may make the transition work better. I’m waiting until I have more of the quilt done, though, to decide if it would work proportionally.

And finally, here’s the scarf progress:

Right now it looks a little bit Vegas, but I think that once I’m past the beads it will look more subtle. I’m pretty sure it’s just having *all* beads that’s making it so gaudy/brilliant. It looks better in daylight than it did last night.