Barring a nasty accident where the yarn somehow snaps, all of the beads are finally strung! Laying out and stringing the second side took about four hours last night. I didn’t manage to knit a stitch (or post progress, for that matter) since I’ve been trying to get to bed earlier and it was already past midnight by the time I finished. I made the mistake of starting to lay out the beads in the living room, so I was stuck watching ice dancing rather than the skiing and ice skating and snow cross that was saved on Kevin’s Media Center. You can imagine my disappointment when I realized that moving many, many 100s of carefully laid out beads was impossible. How dumb. I loved the Russians’ music and thought they were fun to watch, but I like the jumps and lifts of pairs skating better. Though I did have to laugh at the announcers when they were doubtfully eyeing the girl from the third place pair — the top half of her costume, for those who didn’t watch, was two white pasties with fringe. Apparently the rules dictate that the costumes must be athletic in nature, while still embodying the spirit of the dance and music, and the announcers thought that this was crossing the line a bit. 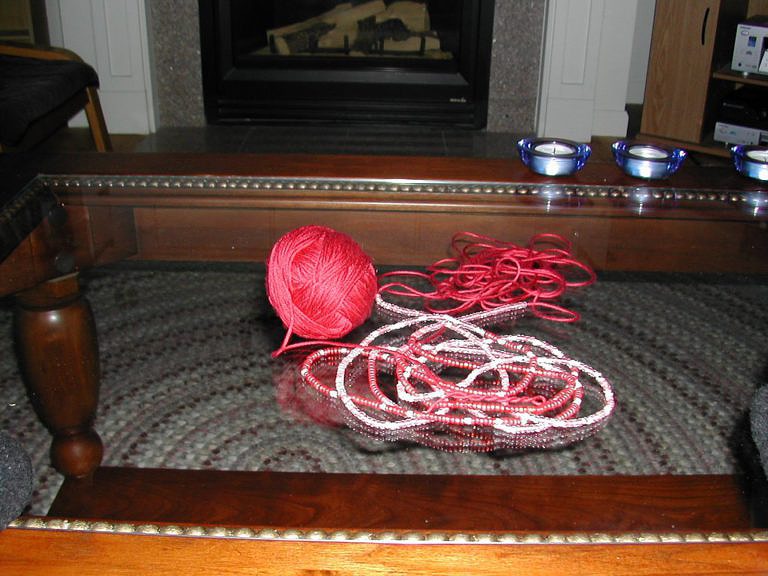 After the ice dancing was the team ski jumping. I never realized how technical ski jumping is — I guess I just thought that not that many people would be attracted to hurling themselves off of one of these jumps and so maybe it was just luck? I guess I didn’t think it through, but even if I had I didn’t realize what a smart sport it is. And I love the team aspect of it. When I used to swim in high school, one of the most exciting parts of meets would be when you’d be on a relay team and someone would “pop a swim” and all of a sudden push the team into the lead. As a middle of the pack swimmer, I always loved the idea that if it was you this time, you’d get out of the pool with a completely different perception of yourself. Such potential. Last night, there were a bunch of people jumping who had the shortest jumps on their teams going in and then jumped so well out of nowhere. It made me so proud of to watch them go from the weak link to the person who opened doors for the team — very cool.