As of yesterday afternoon, we have a new baby yellow tang! After weeks of no options, the fish store had six great tiny guys when I swung by yesterday. They were all small enough to still have the faint white juvenile tiger stripes and seemed really perky and attentive. Kevin had said that he trusted my judgment — we’ve been looking long enough and walked away enough times from too big, sick, or personality-less fish that he was happy to stay home and prep the quarantine tank. I ended up picking our guy because he was so playful, and kept swimming backwards and sideways under pieces of faux-coral. I got him home, fresh-water-dipped him, and let him loose in the quarantine tank. 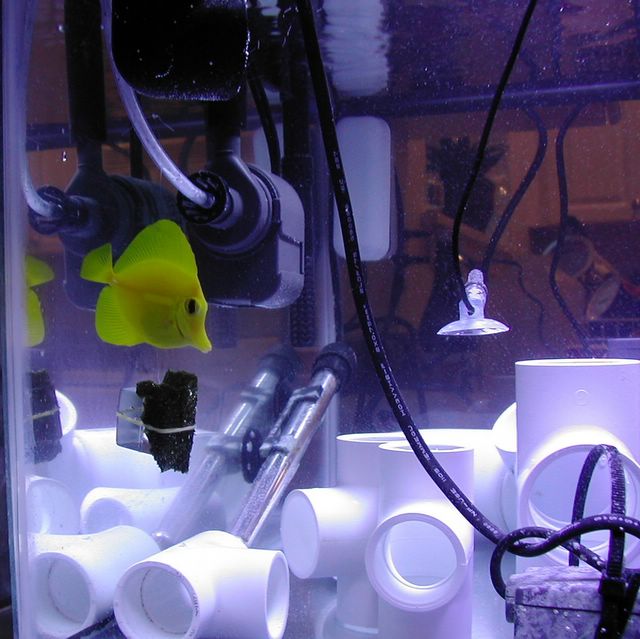 He found the Nori and started working on it within seconds, which seemed like a good sign. Everything that I’ve read about tangs says that they’re constant grazers. The fact that he wasn’t too stressed to eat seemed really promising, especially after being caught in the fishstore, brought home in a bag, subjected to a net, and watched by two people in a new environment. A few hours later he’d made quite a dent and had a fat green belly. We have a lot of circulation in the tank, and he’s been playing in the current, letting it blow him around and then swimming back again — it’s almost like he’s surfing it. He’s been hanging out a bunch in the 1/4″ of clearance between the heater and the side of the tank (tangs are so narrow!), and in the curve of a plastic tie on one of our heaters. I was planning to cut it, but he likes it so much that we decided to leave it. He doesn’t have any signs of black spot, so with luck it will be a quick one month quarantine and then he can go meet the clowns and gramma! 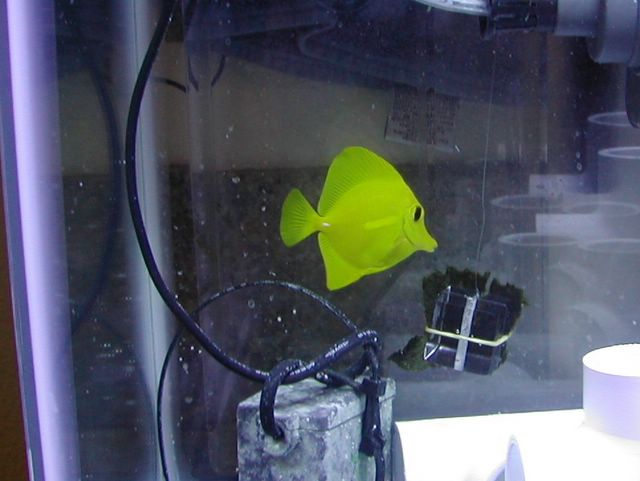 One thought on “A New Tang!”