The tang is getting a “bonus week” in quarantine while we figure out how to remove our hitchhiker crab from the main tank. You may remember the hairy crab we pulled out a while ago? And how there was another still in the tank? Well, we finally saw the one that’s left out of the rocks last night, and he’s grown a lot. I’m completely creeped out by him, as he’s now a solid three inches wide (that’s bigger than our fish), and very fast. In a slip of the toungue the other day I called him a hijacker (instead of a hitchhiker) – Kevin laughed at me but we both decided the more ominous meaning was actually more accurate. So far he’s shy in daylight and scared of the fish, but he’s big enough to shift the (10 to 15 lb!) rocks as he feeds (I saw him do it when I was watching with a flashlight last night) and there’s no guarantee that his diet doesn’t include corals, so it’s definitely time for him to go. Unfortunately, he may be more difficult to convince, and so far we’re lacking a strategy for how to get rid of him. Until we have a plan, the tang is staying put.

Luckily, he seems pretty happy where he is. The quarantine tank has recently bloomed in florescent green algae, and there’s a good bit of bright red and purple coralline algae in front of the pumps. 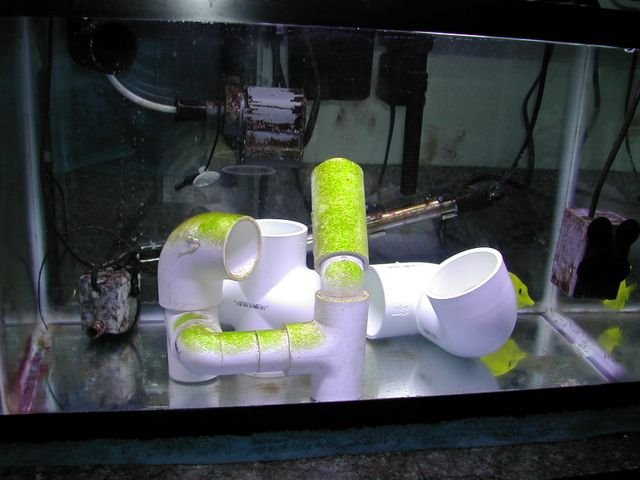 (The color in this photo isn’t distorted. It’s amazing.) We can’t tell if the tang is nibbling on any of it, but he’s clearly well fed and fat with Nori. He’s grown a lot already, and is pretty rambunctious. We need to get that crab out so that we can let him in with the gramma and the clowns! I think he’d be a lot happier with the interaction.