First of all, have you all seen the website of the people who decided to crochet a reef? How cool! It may even beat the endless procession of knitted food.

Since we’re already talking about reefs, perhaps you’d like a plumbing update? 🙂 The checkout woman at Lowe’s laughed and laughed when I showed up at her register and plunked down a single 78¢ piece of PVC. Clearly, she is not dealing with fishtank piping and still has her sense of humour.

After the last “fix” for the tank, which involved flexible tubing and dumped water all over the floor at an astounding rate until I could unplug the pump, I’ve been working on a rigid PVC solution. The problem, roughly, was that I had to find a way of moving water from a 1.125” hole in the bottom of our overflow box over 26” and down 5” to the 2”+ hole in the side of the sump I made, so that it could be skimmed and routed into the refugium. In theory, this really isn’t a hard problem except that PVC is the devil, and the options for elbows and bulkheads and slip versus threaded bushings mean that inevitably I got home with one missing piece and one unnecessary fitting. The most recent trip to Lowes was the (hopefully) final one in a series of nine. (PVC is cheap, and I’m reasonably smart, so the idea was that a DIY solution wouldn’t be too hard and would save a lot of money. Hard to say exactly where the logic went wrong, but this is the ultimate unending project.)

So the missing link, featured at left: 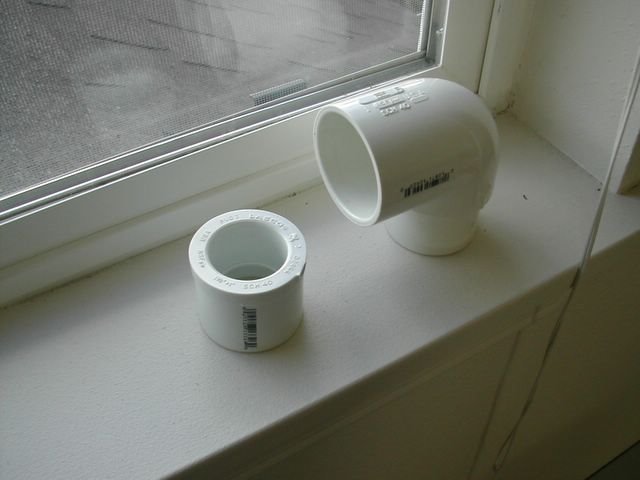 was incorporated into this tiny, simple PVC structure (both the part attached to the sump, and the part, partly obscured by the fan, sitting on the floor. These attach via a union, so that we can easily unhook the sump from the overflow if needed): 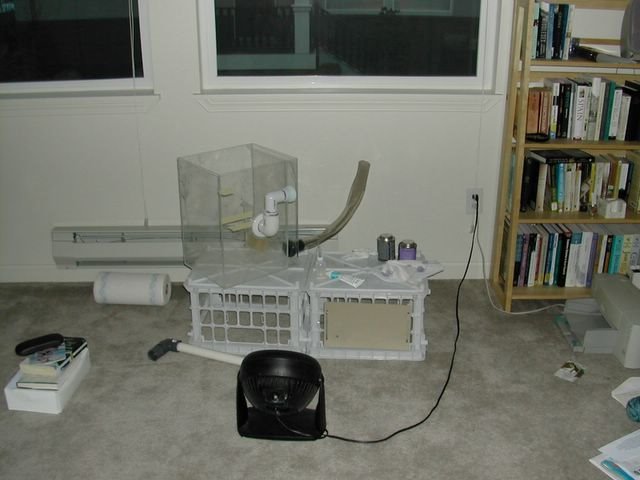 The whole thing is held together by the extremely noxious Purple Primer and PVC Cement. Hopefully they will live up to their rave reviews, and after having the rest of this week to dry the whole thing can have a trial run on the tank on Saturday. At this point, I’m feeling quite successful, because all of the parts fit together. Keep your fingers crossed that the measurements were spot-on and that all goes as hoped. It’s so close…

This picture may give you a sense of why I feel that this whole project is unending. The main tank and refugium are in the foreground (the sump will go on top of the cabinet at right when it’s hooked up), the huge green tub holding the temporary sump is on the floor in the midground, and our quarantine tank with the tang is on the kitchen counter. 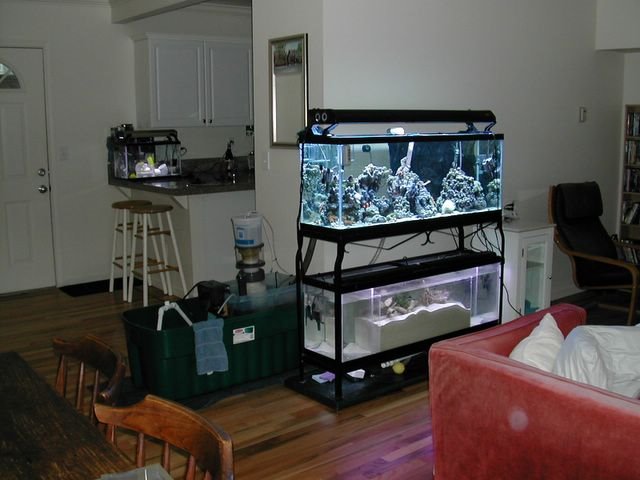 It’s an awful lot of tanks and accessories and it’s looked like this for a good six months — time to condense it all a bit! (I also have hopes that the new system will cut down on noise a bit, but at this point I’m willing to settle for something that just does the job without leaking.)

One thought on “The PVC progress”