Given recent events, you can all imagine my chagrin when I found myself, once again, in the plumbing aisle of Lowes, shopping for PVC. I had decided to DIY instead of buying a woah-expensive freestanding vertical kayak storage solution. In classic “if you have a hammer, every problem’s a nail” style, and since PVC seemed possible after seeing this design, I thought I’d give it a shot with my own plans. I wanted to be able to lie one kayak flat on the floor, then put another in slings directly above it. My original vision was that I’d be able to pick out some folding things with slings (kind of like a luggage rack) that would cost about $40 and be tall enough to place over another kayak. When, like so many things I plan to buy, this didn’t exist and all of the alternatives were expensive, I whipped up this model of questionable stability, went to Lowes, and started working: 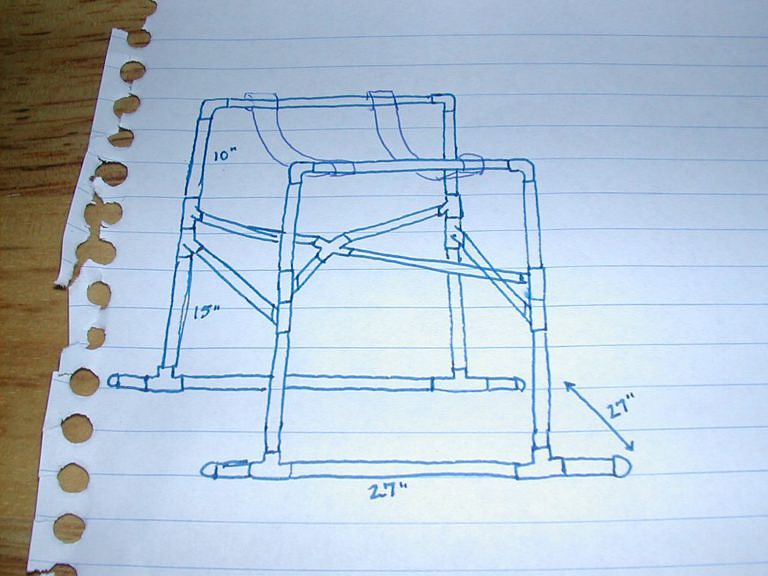 I bought a hack saw to cut the 1 1/2″ PVC, which at $5 turned out to be an excellent investment. Our old PVC cutter is more even but wouldn’t cut anything much bigger than an inch, and despite the multitude of cuts required, this moved pretty quickly. I bought nylon webbing and used the ever-appreciated sewing machine to make loops to fit them on the side supports. In typical PVC-wielding fashion, I bought one incorrect piece, so had to wait for the replacement a day later before I could continue. The stands are wide enough that they won’t fit through our door out to the deck and since we still haven’t decided if this is an indoor or outdoor solution, I don’t want to use the purple primer and PVC cement to weld it all together. It all bent alarmingly when we first put the kayak on but appears to be holding stable since.

(We had all the Brown kids over for dinner, so the picture above shows some posing with the still-suspended kayak. With luck, it’s stable enough to last till morning.)

While I’ve always been a projects person, I’ve never been an engineer, so I’m pretty skittish about the potential for success here. Kevin-the-MIT-grad vetted my plans before I started sawing though, so at least if the ship goes down (ha ha.) I’m in reasonable company. 🙂

P.S. For the knitters who wonder about the status of the protein skimmer cozy, we were all correct in supposing that I would not finish within 24 hours. I’ll have pictures in a few more rows. 🙂