Oops! It’s been almost a week since we got back from Wyoming, and still no post about it! We took a LOT of pictures, and even once we pared the keepers down to 101, that’s still too many for a blog post. So, the full flickr set is here, and here are some of the highlights:

It’s about a fifteen hour drive to Jackson, and people had early evening activities on Thursday. We decided to drive out to Spokane (about 5 hours) on Thursday night. The boys had too much fun gearing the walkietalkies to the same channel, and then we were on our way. The stars were amazing once we got out past the Cascades. Perfect Milky Way views out the passenger window of the mustang.

The next morning, we drove across the top of Idaho on I-90, past Coeur d’Alene, endless crossings of the Clark Fork, a ton of old silver mining towns, and a log truck that had spilled its cargo all across the highway. The views were gorgeous, but some of the winding mountain roads were daunting.

Once in Montana, we split off down I-15 just before Butte, which crosses back into Idaho, where we turned onto a series of smaller state routes to get through Targhee National Forest and into Wyoming.

It amazed me how much of the trip consisted of highway winding along next to the river and the railway line. Put the small farms in, with the hills rising to mountain ranges on either side, and the image solidifies. 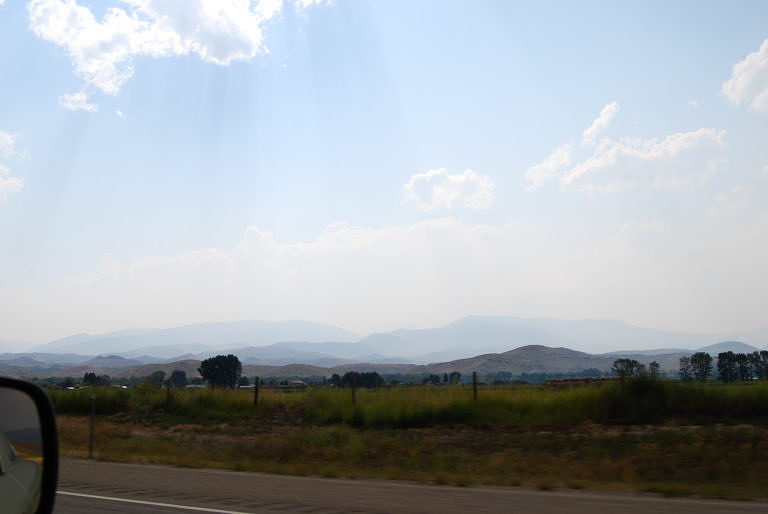 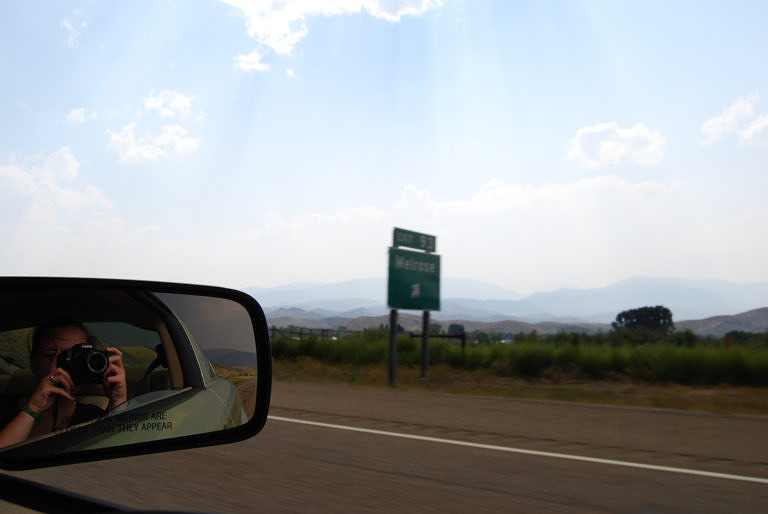 The Idaho-Montana-Idaho portion of the drive was a treat to me. Can you even imagine living with those colors on a daily basis? The photos aren’t saturated enough — the real-life view is deeply vibrant. Growing up, I always found Massachusetts beautiful. And then when I moved to Seattle, I couldn’t get over how green it was. (And *how many* greens it was.) This was a color explosion to the next level.

In Wyoming, once we made it over that huge pass, we stayed at one of Kevin’s coworker’s parents’ house. We saw the Secret Service in their SUVs. (Cheney was just down the road — in town for the opening of a new welcome center in Grand Teton National Park.) Steve’s mom is a quilter, and a knitter, so we had a lot to talk about and I learned a lot.

On Saturday, we went to the southern portion of Grand Teton National park and walked along the Snake river for a few hours. The mountains were amazing –they inspire such wonder at was required to raise them. 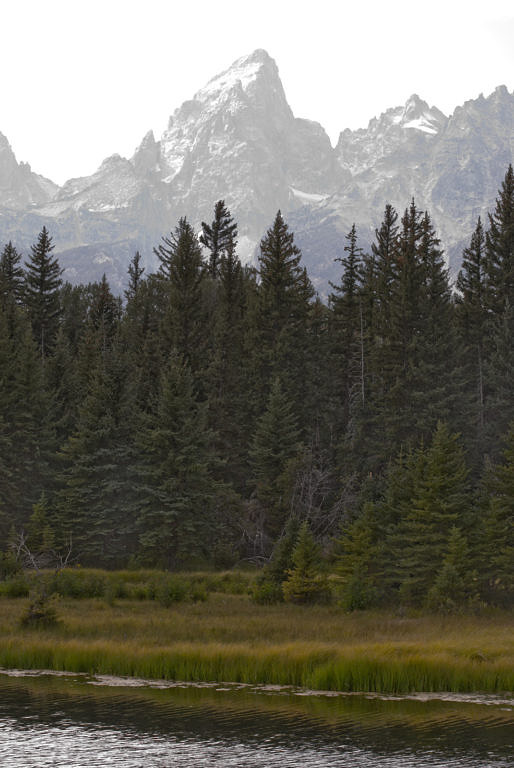 After we walked a good ways along the river, the trail petered out and we started just exploring. The signs of buffalo were everywhere — a fact I found quite thrilling although we didn’t see any in person. 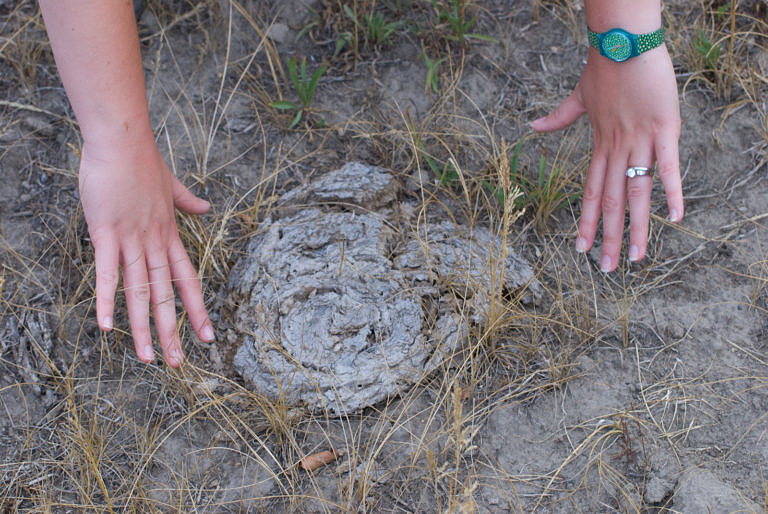 We found another three kinds of animal droppings, which was neat, and Kevin came across a splinter of a LARGE bone.

I know that Montana is supposed to be the Big Sky headquarters, but this wasn’t far off. 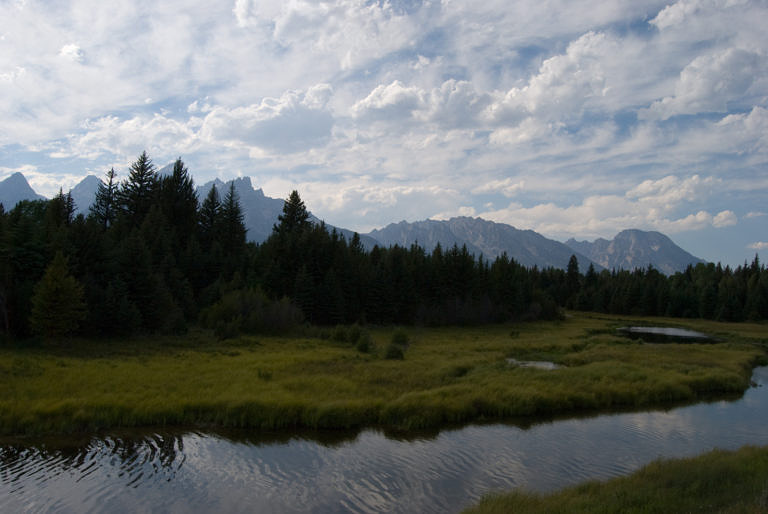 One of my favourite parts of that walk was that there were lots of duck families on the river — always a treat. Also, in the next picture, you can see the layering of mountains — the ridges cascaded away in succession — so lovely. 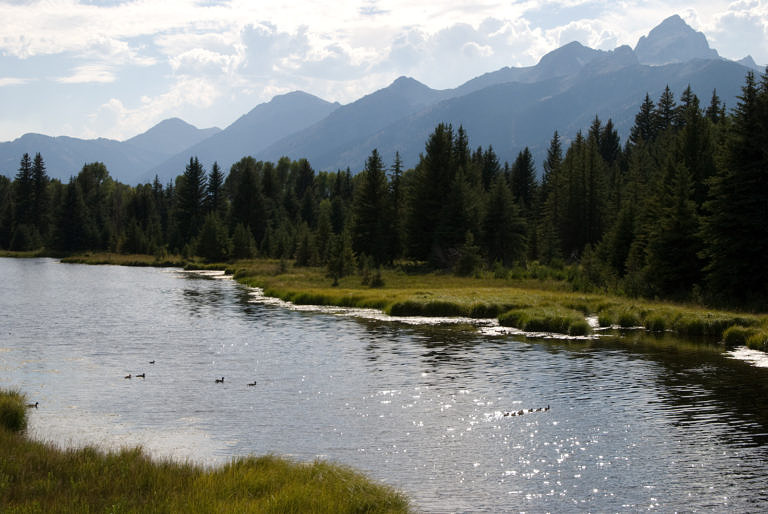 Here’s one last photo of the day, with me changing out of hiking boots in Kevin’s car. 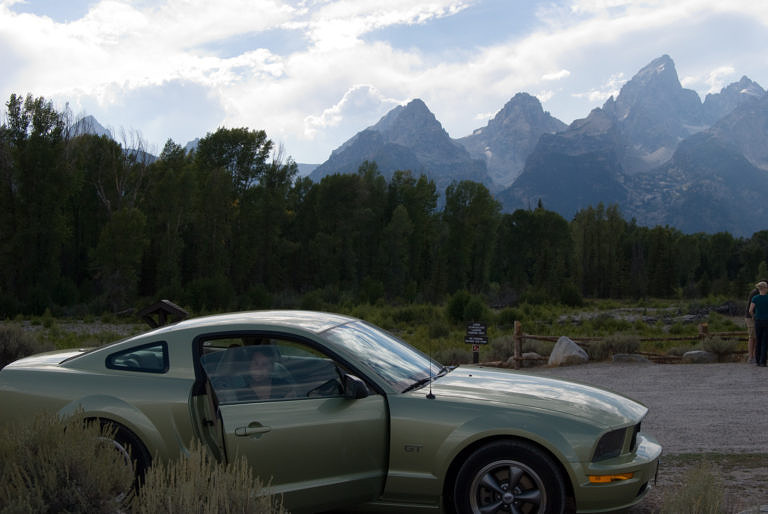 We went to a rodeo, which I’ll spare you the photos of — you can tell that I’ve been raised in the suburbs, since I found all the chasing of calves alarming and depressing.

I’m not a dying yarn person, but don’t these colors make you want to DO something? 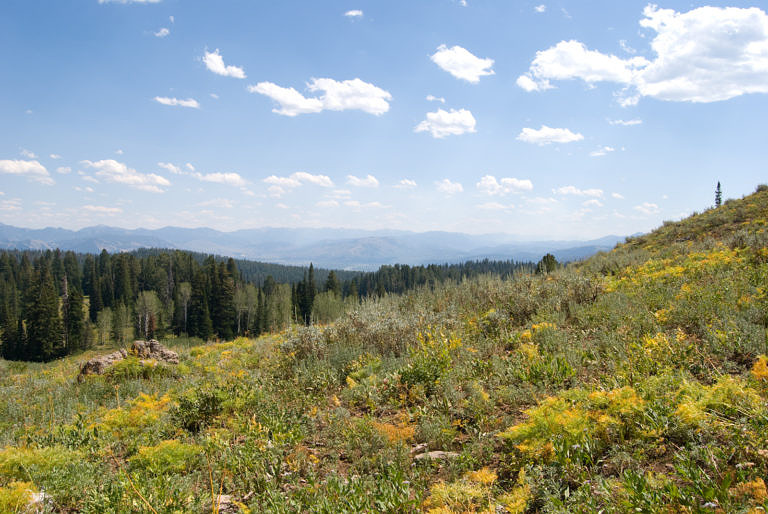 This was on a 5 mile hike we did on Sunday. Better yet, there was a bold little chipmunk chirping at me while I was taking this photo, and a zillion grasshoppers (or similar??) flying around clicking with their yellow wings.

The ride home was a bit long — we did all 15 hours in one day, but I don’t really recommend the 84 route through Oregon — it’s straight and not as interesting as we were hoping. We had books on tape and the iPod, which helped, but it wasn’t the sort of driving where you wonder what will be around the next turn. We were sort of amazed how congested traffic became as we crossed the midline of Washington — not because there was so many cars, but because people stopped honoring the passing lane concept and just cruised along in their favourite lane at 55, regardless. At least the Cascades were gorgeous in twilight. We made it back by about 8:30.

One thought on “Longest Post Ever: the Wyoming Roadtrip”