Nothing exciting on the house front (just lots of trips to move books and canned goods — heavy! — plus some spackling, which doesn’t make for showy photos), and so here are the mountains from the top of the street. 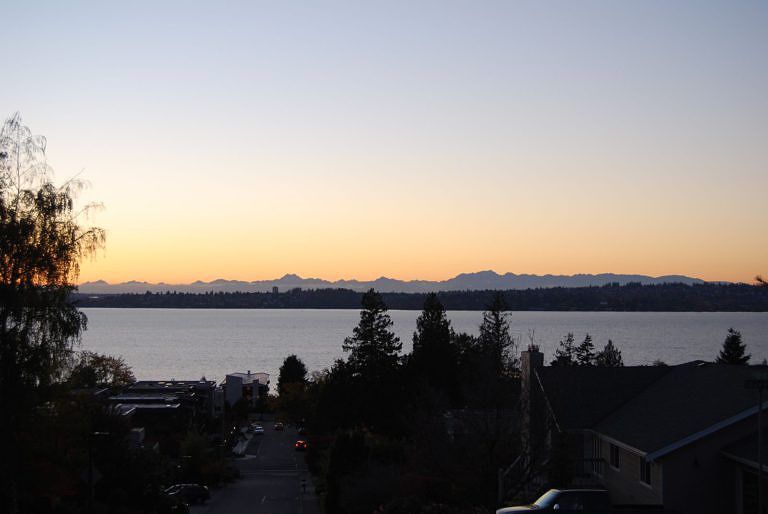 I’ve been trying so hard to not think about how much I’ll miss the apartment — I’m so bad at transitions, and while I love the new house it’s not home yet. (It’s probably bad timing with the move and the Series, but now I’m also having dreams about leaving the Boston apartment. Sad.) The new house is still mostly checklists and echoing spaces. Furniture and rugs will help a lot (and I can see myself doing all my favourite things in the right places: eating, cooking, curling up to read, quilting and NPR, TV and knitting…) and I’m looking forward to the first night that we actually sleep there (Saturday), but it’s still alien and the (increasingly empty) apartment is the comforting place to retreat to at the end of the evening to eat dinner and watch the Red Sox.

We’ve made a lot of progress on the appliances and services front. After many phone calls, Sears WILL give us our refrigerator (yay!!) on the 31st — a week later than hoped, but we can ferry the frozen fish food back from the apartment for the last 3 days of October, and things will be cold soon enough that we can transfer food instead of tossing it or trying to take over unsuspecting eastside friends’ refrigerators… Lowes is dropping our new washer and dryer off the same day. Verizon installs our DSL on Wednesday, too, and I have appointments for the plumber and installation people to give estimates, the furnace people to come do furnace maintenance, and the chimney people to come clean the two chimneys. (Sounds like I’ll be taking a vacation day…)

And thanks for all of the encouraging moving emails and comments — they’ve helped so much. 🙂 It’s nice to have such a group of people well-wishing us along. 🙂

One thought on “A soothing mountain shot”