Apparently once I start on a “burning down the projects” kick, it spreads everywhere. I finally measured, cut, and painted the last of the trim yesterday afternoon. Working with the garage door open was quite pleasant – good light and a good breeze. It started to rain (and then started to POUR) while I was midway through the cutting, so I took out a sponge and “washed” my car with the rain water. You can’t use any soap here because the drains will contaminate the streams where the salmon swim. I emailed the car-washing czar in Kirkland and he said that I could wash with a vinegar/water mix (which I did), but when I followed up with the Redmond guy two months ago he essentially forbid all activities that involved removing dirt/pollution/pine needles with water as being completely toxic to the environment. My skeptical side is totally at war with my ecological and rule-following sides, and so I’ve now decreed as personal law that I can sponge off my car in a hard rain. Too much thinking about a simple rule.

The painted trim looks pretty, but I just can’t wait until it’s in the room where it belongs and the garage floor is empty!!! 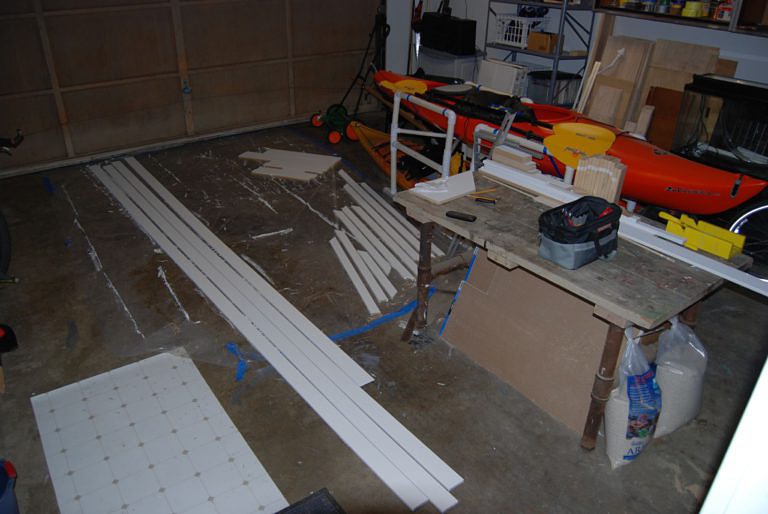 I tidied up the ceiling edges in the family room while watching the Olympics last night. They really look great now. (None of the walls in that room follow right angles so I couldn’t use a square or tape – it all had to be done freehand, but I couldn’t be happier with how crisp it all looked when I walked in this morning. Perfect!!) I worked on painting trim, the mantle, and the french doors while I was on the phone with various family members this afternoon. Great progress. We have a few hours of measuring, sanding, and refining cuts in one of the evenings this week, and then maybe we can rent a nail gun next week to secure all of these trim pieces in place (all 81 of them), a few more daubs of paint over the nail heads, and then we will be done!!

Flush with future victories, and fresh off a phone call with my Dad, we started reconsidering room layouts. We moved the TV to the left of the (blue-tape-free!!!) fireplace, and put the couch and the armchair on the wall opposite. 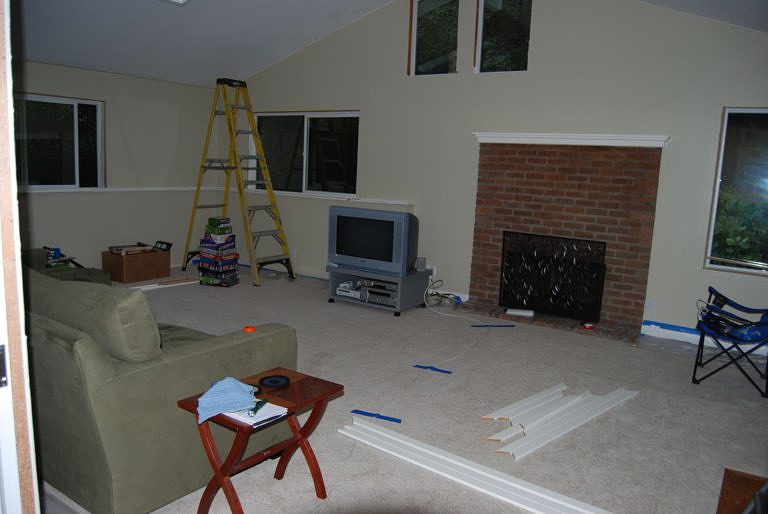 Plus sides: uses the space well, no diagonal angles, puts the huge long wall behind the couches (and therefore broken up by furniture and our pretty lamps from my parents once we buy a new dining room chandelier), you can see the yard & fireplace from all of the seating, there’s room for a game table and reading chairs, if we want them, etc, etc, etc. It’s such an oddly shaped room (and we’ve been doing storage/demolition/painting/window work in it for so long that we’ve never had a chance to really gel with it. Plus, we unplugged the TV back in February since it was interfering with the (much more important) internet signal, and so we’ve barely used the room.

The major downside is that it is much, much more wiring work for Kevin, and that it has to happen in the crawl space. :-/ You can see that right now we’ve just strung a coax cable from our utility closet to the TV, and held it down to the carpet with blue painter’s tape. The final solution would involve punching through the wall by the fireplace and running the same cable under the floor.

But still, we’re both huge fans of the new layout. It’s a much better use of the room. We spent a few hours watching Olympics there this evening and kept remarking how much we liked it.

Meanwhile, in other house news, Kevin found a hive of yellow jackets outside our front door. I don’t know how we haven’t noticed them/been stung, since the hive is literally a foot from our major entrance/exit. In any case, Kevin was coiling a hose, got stung twice, and declared war. 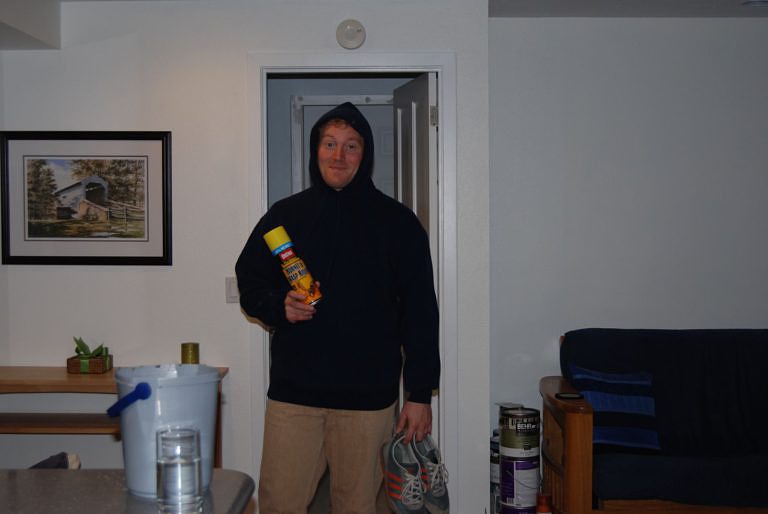 At twilight, he decided there was actually still too much activity, so he waited to strike until after dark. Early signs look promising that he got everyone. It’s a pity, since I think that we’re pretty live and let live, but not on the front path. :-/

In the last of the Sunday night news, Kevin found a Shrimp Curry recipe in my new birthday cookbook, so I played sous-chef and chopped and he put together one of the most amazing-smelling dishes we’ve ever had in our kitchen… 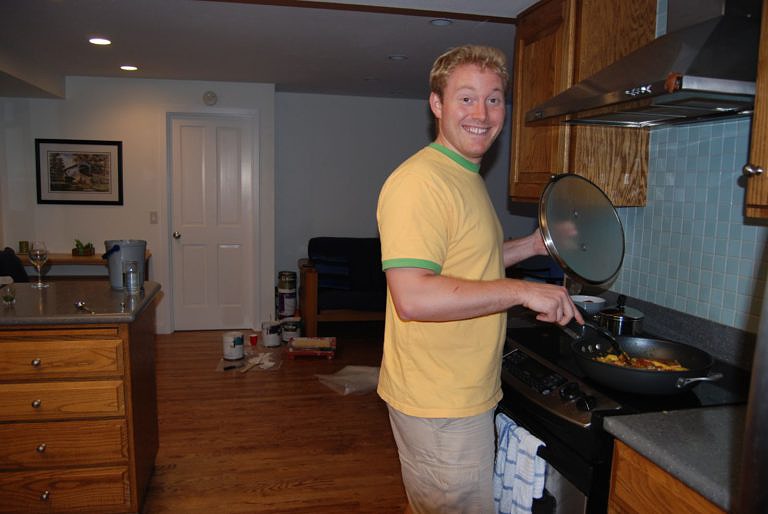 What a great way to cap a cloudy Sunday of tub-cleaning, painting, sweeping, vacuuming, furniture-moving, Olympics, knitting, and a water change for the fish. 🙂

2 thoughts on “A great Sunday”